Irish independent film “Glassland” is a dry, somber character drama revolving around the daily life of one young man who has been driven to lots of frustration and desperation. He has tried to make things better for himself and a family member of his whom he deeply loves and cares about, but he is reminded again and again of how difficult their situation is, and he only becomes more exhausted and exasperated as being at a loss about his continuing misery.

In the beginning, the movie observes how messy and shabby life has been for John (Jack Reynor), a poor working-class lad who has earned his meager living as working as a taxi driver in Dublin. When he comes back to his house early in the morning after several hours of working, nobody is inside this barren house, and he comes to sleep for a while, but then he has to go outside when he gets a call from his friend Shane (Will Poulter), who needs his driving service for a private reason.

When John comes back to his house some time later, he finds that his alcoholic mother Jean (Toni Collette) returns, but she has been quite unconscious on her bed due to another bout of heaving drinking, and, once he realizes that his mother is in a very critical medical condition, he quickly takes her to a local hospital. While she fortunately survives in the end, a doctor warns John that she may soon need liver transplant if she does not stop drinking right now, and John certainly becomes more concerned about his mother as a good son.

We soon see how John attempts to get things under control in their house. For example, he does some cleaning job before his mother returns, and Jean naturally becomes quite angry and furious when she later finds that there is nothing to drink. As her alcoholism brings out her worst sides, John calmly shoots his mother’s alcoholic rage with his cellular phone, and we come to sense that he has been pretty accustomed to the ramifications of his mother’s alcoholism. 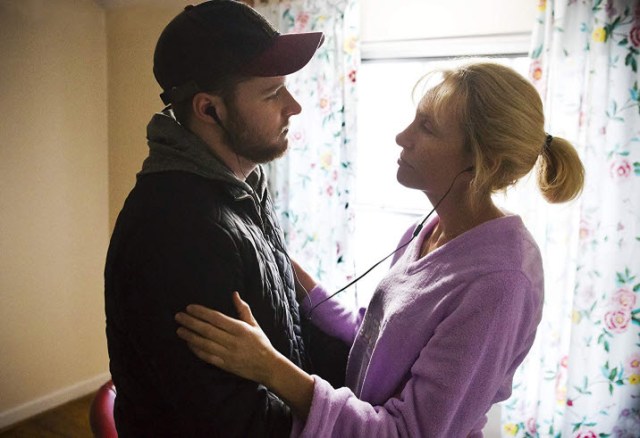 Nonetheless, John still often feels confused and helpless like a little boy, and a few small private scenes between him and Jean show us how much they have been emotionally dependent on each other for years. When her craving for alcohol is decreased a bit at one point, Jean shows her better sides with some sad tenderness, and John looks a little happy and relaxed as functioning as someone his mother can lean on. We later get a poignant moment when they dance a bit together with some music played on the background, and things look fine for both of them for a while.

However, not so surprisingly, life keeps giving John troubles and difficulties as usual. His mother soon goes out for drinking again, and John finds himself becoming quite agitated when she does not come back. In addition, he continues to drive around streets and alleys during late nights, and he sees more of the seedy aspects of his world, which are mainly represented by several foreign women who are clearly prostitutes.

While never hurrying its story, the movie calmly conveys us to Jack’s accumulating frustration and exhaustion behind his quietly forlorn appearance, and director/writer Gerard Barrett steadily maintains the drab mundane atmosphere surrounding the characters in his movie. As we get to know more about John and a few other characters around him, we also come to sense more of hopelessness and desperation in their world, and we are not so surprised when his friend makes a certain big decision later in the story.

At least, there comes a chance of hope and recovery for Jean when she is finally taken to a local rehabilitation center by her son, but he is told that she can only stay there for a week and needs to be taken to some better place, and that means he must get a substantial amount of money. Although a part depicting a shady job which he agrees to do for that money is rather murky and half-baked, the movie sticks to its restrained low-key mood even at that point, and that is why the following finale mostly works.

Like any other good character drama films, the movie depends a lot on its main performers. Jack Reynor, a promising young Irish actor who deservedly received the Special Jury Prize for his acting when the movie was shown at the Sundance Film in 2015 and has been more prominent during next several years thanks to his good supporting turns in a number of notable films such as “Sing Street” (2016) and “Midsommar” (2019), is effortless in generating genuine pathos from his sad, miserable character, and he is also complemented well by Toni Collette, who is fearless as usual while fully immersing herself into her deeply flawed and damaged character. In case of a few notable cast members around them, Will Poulter, who later appeared along with Reynor in “Detroit” (2017) and “Midsommar”, is solid in his supporting part, and Michael Smiley, who drew my attention for the first time through his supporting turn in BBC TV drama series “Luther”, is also fine as a generous figure who provides some help and counsel to John at the rehabilitation center.

In conclusion, “Glassland” is rather modest in its overall achievement, but this overlooked film deserves more attention considering its quiet but harrowing human drama, and it is surely worthwhile to watch for the haunting emotional moments generated from the wonderful acting by Reynor and Collette. They are thoroughly believable right from the beginning, and their characters will linger on your mind for a long time after the movie is over.

This entry was posted in Movies and tagged Alcoholism, Mother and Son. Bookmark the permalink.