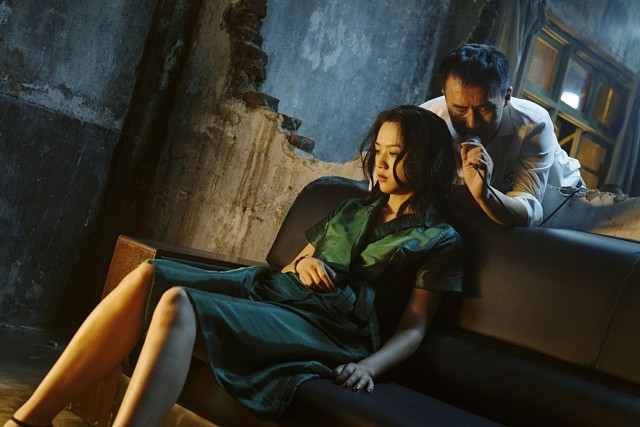 Chinese film “Long Day’s Journey Into Night”, which is not associated at all with Eugene O’Neill’s classic play of the same name (Its original title is “Last Day on Earth”, by the way), is often frustrating and confusing for good reasons. While the first half of the movie is strewn with fragmented pieces of memories and dreams, the second of the movie is equally elusive and disorienting even though it is presented in a more continuous way, and, to be frank with you, I am still scratching my head as wondering whether I really understand everything shown on the screen.

At the beginning, we meet its hero, named Lou Hongwu (Huang Jue), and his narration tells us a bit about his current state. He left his hometown many years ago, but now he returns to his hometown for his recently diseased father’s funeral, and he cannot help but haunted by the memories of his past. He recalls an old friend who was killed after frequently causing troubles due to gambling, and he also reminisces about a woman named Kaizhen (Tang Wei), who disappeared away from him around that time although they seemed to be passionately in love with each other.

As obtaining a few things which may lead him to Kaizhen, Lou Hongwu tries to find her as much as he can, but he only finds himself in more confusion and frustration. He encounters a number of folks who may help him, but what they respectively tell him only reminds him that he did not know her much from the beginning. For example, it seems Kaizhen is not her real name, and Lou Hongwu also comes to learn a bit about her seedy past. 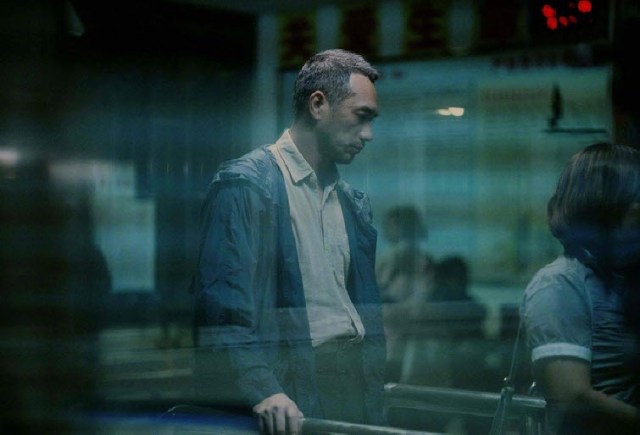 Nevertheless, he remains haunted by his memories of her, and the movie throws at us a series of flashback scenes, which may not be entirely true as reflected by its stylish mood and details. There is a wonderful nocturnal scene showing a sort of Meet Cute moment between Lou Hongwu and Kaizhen in a tunnel, and her alluring beauty is as mesmerizing as her emerald green dress. There is also a noirish moment when they later come to plan something dangerous for getting out of their miserable world, and we get an impressive unbroken shot as he is about to execute their plan at a movie theater.

However, the movie keeps being vague and elusive about the relationship between Lou Hongwu and Kaizhen. While it does not show or tell us whether that risky plan of theirs was successful in the end, it also does not reveal much about how they subsequently came to be separated from each other, so we only become more confused and frustrated just like our hero.

Furthermore, director/writer Bi Gan, who previously made a feature film debut with “Kaili Blues” (2015), adamantly maintains his slow, austere approach reminiscent of the works of Andrei Tarkovsky, which actually influenced him a lot during his college years. As the camera of cinematographers Yao Hung-i, Dong Jinsong, and David Chizallet calmly and steadily maintains its continuous movements, the movie constantly demands considerable focus and patience from us, and you may find yourself becoming quite impatient from time to time.

Nevertheless, the movie gradually becomes more interesting as serving us a number of haunting scenes to linger on our mind. During the scene where Luo Hongwu visits a prison for meeting someone who may tell a bit about Kaizhen’s past, the camera slowly comes to focus on that person in question, and the mood becomes a little poignant as that figure phlegmatically recollects her past with Kaizhen. In case of the scene involved with a man who once lived with Kaizhen for a while, the movie becomes a little humorous in the beginning, and then we come to feel some bitterness and wistfulness as he talks to Luo Hongwu about his past with her.

During the second half of the film, Luo Hongwu happens to spend some time in a shabby movie theater where a 3-D movie is being shown, and that is when we get the main technical highlight of the movie: a 59-minute 3-D sequence shot in one unbroken shot. As the camera fluidly moves or flies along with our hero from one spot to another, we get to sense more of his yearning toward Kaizhen, and the movie engages us more with some stylish visual touches, though I must point out that its dialogues often feels a bit too static and contrived for me (“Clock is a symbol of eternity.” – “Firework is a symbol of transience.”).

Although the move did not entertain me a lot, I admired its technical aspects at least, and I also appreciated the good performances from its few main cast members. While Huang Jue holds the center with his earnest performance, Tang Wei, who has been more notable since her courageous breakout turn in “Lust, Caution” (2007), is simultaneously attractive and ambiguous as hovering over the film, and Sylvia Chang is also effective in her brief appearance as the mother of Lou Hongwu’s dead friend.

In conclusion, “Long Day’s Journey Into Night” is an unconventional piece of work which mostly depends on mood rather than narrative, and, though it may look languid and ponderous to you at first, it will be a rewarding experience if you are open to something different and challenging. I felt distant to what it is about, but I was fascinated nonetheless with how it is about, and that is enough for recommendation for now. 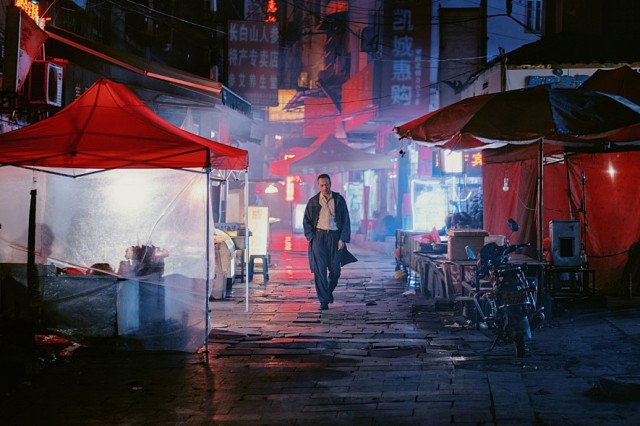 This entry was posted in Movies and tagged Mystery, Romance. Bookmark the permalink.