“Spider-Man: Far From Home”, the first Marvel Cinematic Universe (MCU) flick coming out after “Avengers: Endgame” (2019), is mildly disappointing without enough excitement or imagination to engage us. Although it is fairly enjoyable in its mostly lightweight tone just like “Spider-Man: Homecoming” (2017), it is not particularly compelling or exciting mainly due to its rather mediocre action sequences, and even a couple of nice surprises thrown to us during its end credits do not help much in my trivial opinion.

After the prologue scene set in some remote area of Mexico, the movie explains a bit about how life has been going on for Peter Parker/Spider-Man (Tom Holland) and his high school friends in New York City since what happened during “Avengers: Infinity War” (2018) and “Avengers: Endgame”. When the half of the population of the Earth and the whole Universe was wiped out by that infamous finger-snap at the end of “Avengers: Infinity War”, not only Parker but also nearly all of his high school friends were gone, but they all eventually returned along with many others five years later as everything was dramatically restored during the climatic part of “Avengers: Endgame”, and now they are back in their school because they were not aged at all despite their five-year absence.

While he and his friends are looking forward to the upcoming school trip to Europe, Parker is still haunted by the death of his mentor/sponsor Tony Stark/Iron Man (Robert Downey Jr.), and he understandably feels daunted when he is expected to become the next superhero leader to succeed Stark. When Nick Fury (Samuel L. Jackson) tries to contact him for some important matter, he is not particularly eager to talk with Fury because he is unsure about whether he can do whatever will be demanded by Fury, and he simply wants to have a good time with his friends for a while as a normal teenager. 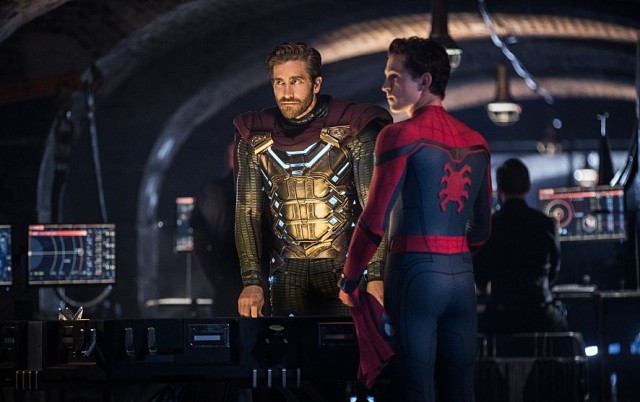 For now, Parker is mainly interested in getting closer to MJ (Zendaya), a smart and charming girl for whom he has carried a torch since “Spider-Man: Homecoming”. He is going to show his affection toward her while they and other students look around here and there in Venice, but, of course, things do not go well due to a sudden big threat appearing in the middle of the city, and Parker has no choice but to do whatever he can do for protecting his friends and many other people.

And that is how he comes to encounter Quentin Beck/Mysterio (Jake Gyllenhaal), who eventually saves the day along with Parker after suddenly appearing from nowhere. According to Beck, the Earth is being threatened by some cosmic entities coming from a parallel universe, and he has been already working with Fury, who still wants Parker to join the ongoing mission and consequently changes the schedule of Parker and his friends’ trip a bit.

While Parker reluctantly gets involved more into this urgent situation as expected, the movie often lightens up the mood via a series of comic moments between him and his friends including Ned Leeds (Jacob Batalon), who mainly functions as your average annoying comic relief. There is a funny scene where Parker inadvertently throws his friends into a perilous circumstance as clumsily handling what was left to him by Stark, and we later get some laugh from a sweetly awkward scene where Parker and MJ happen to have a private moment in Prague, Czech.

However, the screenplay by Chris McKenna and Erik Sommers, who previously worked as the co-writers of “Spider-Man: Homecoming”, begins to falter as hurriedly moving toward the climatic part unfolded in London, and the movie is also often hampered by its dull, uninspired CGI actions. While there are some interesting potentials in the plan of the villain in the story, they are eventually abandoned as the movie busily hurls lots of things into the screen, and we only come to feel more distant to whatever is being at stake for Parker and other main characters in the story.

Anyway, director John Watts, who drew my attention with “Cop Car” (2014) before ascending to “Spider-Man: Homecoming”, competently handles those big CGI actions in the film at least, and he also drew several good performances from Tom Holland and some other main cast members. While he is still a little too neurotic and whiny to me, Tom Holland comfortably fills his role, and he is supported well by the other main cast members in the film on the whole. While Samuel L. Jackson, Cobie Smulders, Jon Favreau, and Marisa Tomei are reliable as usual, Jake Gyllenhaal has some fun during a certain moment of big speech, and Zendaya, Jacob Batalon, Angourie Rice, and Tony Revolori are adequate in their respective supporting roles.

In conclusion, “Spider-Man: Far From Home” is another passable MCU product which plays safe within its genre boundaries without showing anything new or unexpected except two aforementioned bombshell moments, and I am now reminded again of how refreshing and exhilarating Oscar-winning animation feature film “Spider-Man: Into the Spider-verse” (2018) was in many aspects. I would rather recommend you to watch that great animation film instead, but, considering the active reactions of other audiences around me I observed during my viewing, you may be more enthusiastic than me to “Spider-Man: Far From Home”, so I will not prevent you from watching it for now.

This entry was posted in Movies and tagged action, High School, SF, Superhero. Bookmark the permalink.