Finnish comedy film “Heavy Trip” made me cheer for guys from whom I would rather distance myself as much as I can. As a neurotic nerdy guy still cringing at the traumatizing memories of attending a Nine Inch Nails concert, I usually avoid any type of loud rock music, and I certainly do not have any particular interest in heavy metal music, but I came to like those silly but endearing heavy metal band members in the film while also appreciating its numerous quirky and funny moments.

At the beginning, the movie shows us the rather pathetic status of a young country lad named Turo (Johannes Holopainen) and the other three members of his heavy metal band: Lotvonen (Samuli Jaskio), Jynkky (Antti Heikkinen), and Pasi (Max Ovaska). While these young guys have devoted themselves to music for years, their life and career have been going nowhere without any original music from them, and they are still stuck in the basement right below a local reindeer slaughterhouse belonging to Lotvonen’s father, who is mostly quite cheerful despite his occupational hazard.

In addition, they are frequently ridiculed for their unconventional appearance. Mainly Due to his long hairdo and black leather outfit, local young men frequently throw homophobic slurs at Turo, and he is not regarded well by the police officer of the town, who happens to be the father of a girl for whom he has carried a torch. It seems Miia (Minka Kuustonen) also likes Turo, but Jouni (Ville Tiihonen), a brash and popular local musician, is already prepared to win her heart, and he certainly does not welcome any interference from Turo. 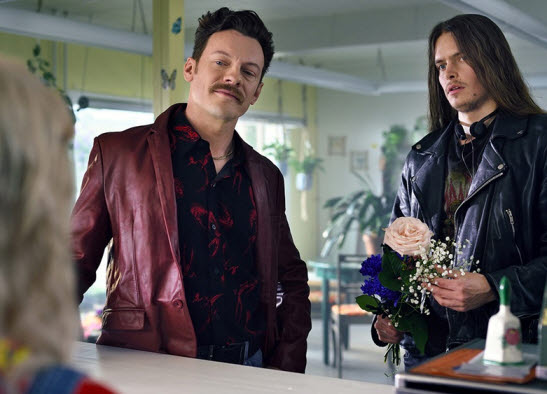 And then there comes an unexpected change into the daily life of Turo and his band members. Some Norwegian guy happens to drop by the reindeer slaughterhouse for buying some venison on one day, and he turns out to be associated with a renowned heavy metal festival. Although their encounter with this guy is not very pleasant due to a hilariously bloody moment reminiscent of “Carrie” (1976), he leaves with a demo cassette tape containing their first original song performance besides giving them his calling card, and Turo and his band members are excited about the possibility of performing at that heavy metal festival.

Nevertheless, Turo and his band members cannot help but feel happy to see how things look a lot better to them than before. At one point, they decide to make a promotional photograph for their band, and we subsequently get a good laugh from how they shoot the photograph via a speed camera installed outside their village. While Turo becomes more confident about approaching to Miia, Pasi, who is incidentally the nerdiest member of the bunch, comes to take a bolder stance on their heavy metal music, and he also comes to think of a kinky band name which I will not write down here.

While taking several predictable narrative turns as expected, the movie keeps bouncing along the story with its broad but lovable characters, and directors/co-writers Juuso Laatio and Jukka Vidgren, who wrote the screenplay along with Aleksi Puranen and Jari Olavi Rantala, continue to provide us plenty of small and big laughs. We surely come to see Turo and its band members trying their first public performance in front of many local people, and we are not so surprised by how that eventually ends, but this moment is handled well enough to draw chuckles from us at least. In case of a certain supporting character whome Turo comes to befriend at a local mental hospital, we can clearly see from the beginning that he will play an important part in the story, but then the movie surprises us when that moment arrives after an unexpected plot turn later in the story.

And things become more lunatic and hysterical during the last 30 minutes of the film. I will not go into details for not spoiling your fun, but I can tell you instead that I was caught off guard several times as admiring the filmmakers’ willingness to put everything except kitchen sink into the increasingly insane circumstance surrounding Turo and his band members. Still maintaining its offbeat sense of deadpan humor, the movie smoothly glides into the climactic part unfolded in that heavy metal festival (is this a spoiler?), and I must confess that, despite my lack of enthusiasm on heavy metal music, I came to go along with the loud but jolly musical spirit felt from the screen.

On the whole, “Heavy Trip” is an odd but sweet and hilarious comedy film, and I enjoyed its humor and spirit as occasionally reminded of Rob Reiner’s classic comedy film “This Is the Spinal Tap” (1984), In my inconsequential opinion, the metal band members of “Heavy Trip” are no more talented than the Spinal Tap, but I came to like them more than expected as smiling at their earnest passion from time to time. Yes, I still do not like heavy metal music much, but the movie was a pretty entertaining ride for me, and that is more than enough for recommendation.

This entry was posted in Movies and tagged Band, Comedy, Heavy Metal, Music. Bookmark the permalink.