Norwegian film “In Order of Disappearance” is a deadpan revenge drama sprinkled with a cold, morbid sense of black humor. While as stark, brutal, and violent as expected, the movie serves us a number of dryly absurd moments along with considerable mood and style to be appreciated, and it is often darkly amusing to observe its slow but relentless march to the inevitable finale.

At the beginning, the movie solemnly shows another snowy winter day in some rural region of Norway, and then we meet Nils Dickman (Stellan Skarsgård), who has run a successful snow ploughing business for years and is about to receive the Citizen of the Year award for his considerable contribution to the local community. Everything looks fine as he humbly receives the award in front of others including his wife, but he and his wife are notified on the very next day that their only son died of drug overdose, and they are certainly shocked and devastated by this tragic news.

Shortly after his son’s funeral, Dickman is almost driven to suicide attempt, but then he comes to learn the truth about his son’s death from his son’s close friend/colleague, who got Dickman’s son involved with a local drug organization without telling him anything. Dickman soon becomes quite determined to revenge his son’s death, and we subsequently see him tracking down and then killing those gang members responsible for his son’s death one by one. In addition to several firearms, he also has a big snow plough, and we later get a calm but tense moment when he calmly drives his snow plough right behind his target’s vehicle without drawing any suspicion from his target. 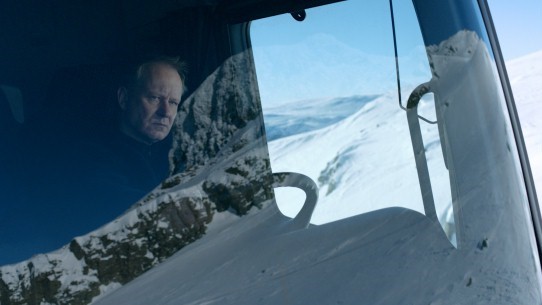 As Dickman is gradually executing his revenge, the boss of that local drug organization, nicknamed “the Count” (Pål Sverre Hagen), is understandably baffled about the serial disappearance of his several henchmen, and he comes to suspect a rival organization led by an old Servian boss nicknamed “Papa” (Bruno Ganz). That eventually leads to the unfortunate death of a key member of Papa’s drug organization, and the situation later becomes more unstable and complicated as Papa and his henchmen vow for retaliation.

Even at that point, the movie keeps its attitude straight as patiently unfolding the increasingly chaotic circumstance surrounding Dickman and other main characters in the film, and we get some small dry laughs from several amusing scenes including the ones showing the Count’s problematic domestic life with his ex-wife and their young son. He simply wants to be a good father to his son, but, alas, he only finds himself becoming more distant to his son while mostly occupied with his imminent business trouble, and his son does not seem to care much about him.

When the Servian gangs finally arrive to deal with the Count and his organization later in the story, the mood accordingly becomes more intense as required, and the movie does not flinch at all from those brutal moments of violence, but it still does not lose any of its black humor. Whenever a character is killed in the film, a brief obituary appears on the black screen, and that feels like more a twisted refrain as the body count in the movie continues to increase along the plot. 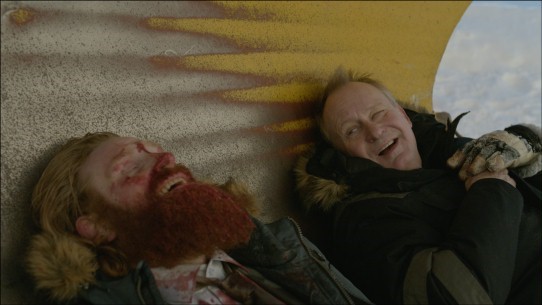 While clearly influenced by the works of the Coen Brothers such as, yes, “Fargo” (1996), the movie is equipped with its own distinctive qualities. Although most of other characters in the film besides Dickman are more or less than broad caricatures to get killed sooner or later, they are presented with some colorful personality at least, and I was especially amused by a brief scene showing the unexpected romantic relationship between two certain supporting characters. Thanks to cinematographer Philip Øgaard, the movie is constantly shrouded in icy wintry atmosphere, and its chilly impression is further accentuated by the frequent wide shots of vast snowy landscapes.

The main performers of the movie steadily maintain their straight appearance throughout the film as demanded. While Stellan Skarsgård diligently holds the center with his understated performance, Pål Sverre Valheim has several juicy moments as his character becomes more nervous and agitated along the story, and I also enjoyed the solid supporting performances from Peter Andersson, who plays Dickman’s ex-criminal brother, and Bruno Ganz, a legendary swiss actor who recently passed away.

By the way, the screenplay by Kim Fupz Aakeson has some notable flaws which distracted me from time to time. While it drags for a while during the middle part, it does not handle well its few female characters including Dickman’s wife, and the same thing can be said about two simple-minded police officers in the film, who are nothing more than redundant comic relief.

Although it may be a little too chilly for some of you, “In Order of Disappearance” has enough style and substance thanks to the skillful direction of director Hans Petter Moland, who recently made its American remake version starring Liam Neeson. Although I often observed its story and characters from the distance, I was entertained by its well-made aspects at least, and that is enough for recommendation in my inconsequential opinion.

This entry was posted in Movies and tagged Crime, revenge, Thriller. Bookmark the permalink.