“Mamma Mia! Here We Go Again” is better than I expected, and that is a little surprise for me. Yes, this is your typical jukebox musical movie just like its predecessor, but it is somehow less tiresome in comparison as providing a number of nice musical moments to be savored, and I found myself going along with its cheerful spirit even while recognizing its numerous artificial aspects.

The movie alternates between two main parts, and one of them begins with Sophie (Amanda Seyfried) preparing for the new opening of a hotel located at some Greek island. While the hotel originally belonged to Sophie’s mother Donna (Meryl Streep), Donna unfortunately died a year ago, and, though still feeling sad about her mother’s death, Sophie is quite determined to continue her dear mother’s business, and everything seems to be going well as planned by her and her trustful manager Fernando (Andy García)

However, we soon come to learn that things do not go as well as Sophie wishes. While Sam (Pierce Brosnan), Donna’s husband who is also one of three men in Donna’s life, has been near her, the other two guys, Bill (Stellan Skarsgård) and Harry (Colin Firth) cannot come to the opening ceremony for each own personal reason, and Sophie’s husband Sky (Dominic Cooper) cannot come either because he has been in New York City for developing his career further. At least, Donna’s two female friends, Tanya (Christine Baranski) and Rosie (Julie Walters), come to the island as expected, and they certainly cheer up Sophie a lot as occasionally remembering Donna.

In case of the other part of the movie, we see how young Donna (Lily James) came to settle in that Greek island. As soon as she graduates from Oxford along with Tanya and Rosie, who are respectively played by Jessica Keenan and Alexa Davies in this part, young Donna goes to France for enjoying more of her youthful life, and that is where she happens to encounter young Harry (Hugh Skinner). Although he is initially very awkward in front of Donna, Harry comes to express his love to her through his musical scene, and, of course, it does not take much time for them to spend a very intimate time together.

However, Donna soon leaves Harry, and then she arrives in a rural beach area of Greece. When she misses a boat which would take her to that island, she happens to meet young Bill (Josh Dylan), who is willing to take her to that island by his yacht. As they spend some time together in his yacht, Bill becomes attracted to Donna just like Harry, and he also demonstrates his singing ability to her for showing his love to her, but then they happen upon an unexpected incident on their way to the island.

In the end, Donna says goodbye to Bill when she arrives in the island, and then she comes upon an old farmhouse which somehow looks fine to her despite being in the serious need of repair and renovation. As looking around the inside of the house, she comes across young Sam (Jeremy Irvine), and something instantly clicks between them from the beginning, but, not long after their cozy musical scene, it turns out that Sam has something he did not tell her in advance.

As the screenplay by director Ol Parker and his co-writers Catherine Johnson and Richard Curits casually goes back and forth between its two predictable but engaging storylines, the movie constantly serves us musical scenes based on a number of notable songs by ABBA as its predecessor did. While “Mamma Mia”, “Dancing Queen”, and “Super Trouper” appear again, other songs including “When I Kissed the Teacher” and “Waterloo” are delightfully utilized on the whole, and I particularly like how “My Love, My Life” is poignantly used during a crucial scene later in the film. 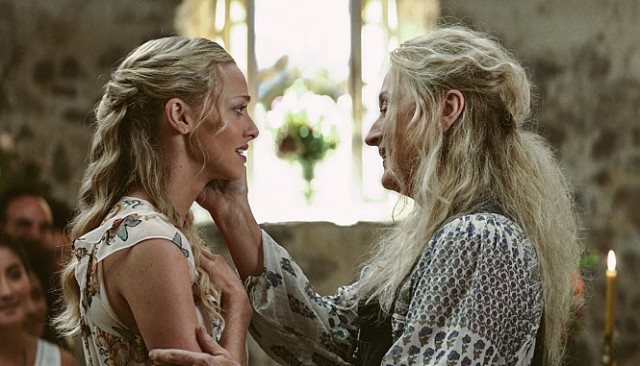 And it surely helps that the main cast members of the film have lots of fun together on the screen. While Amanda Seyfried gives a likable performance as she did before, Lily James did a terrific job of channeling Meryl Streep’s spirited performance in the previous film, and she is also supported well by her two co-performers Jessica Keenan and Alexa Davies, who are as solid as Jeremy Irvine, Josh Dylan, and Hugh Skinner.

In case of other notable performers in the film, Julie Walters and Christine Baranski are enjoyable as usual, though I must say it is a shame that Baranski does not have something as show-stopping as performing “Does Your Mother Know?” in the previous film. While Dominic Cooper, Pierce Brosnan, Stellan Skarsgård, and Colin Firth fill their functional roles as required (Brosnan sings as little as he can within his limit this time, by the way), Andy García is suitably colorful, and Cher is mostly adequate as Sophie’s estranged grandmother, although I must point out that she is merely three years older than Streep (and they once played together in “Silkwood” (1983)).

On the whole, “Mamma Mia! Here We Go Again” manages to be entertaining without being as excessive as its predecessor, and I came to have a fairly good time with it while willingly overlooking several shortcomings including its rather thin narrative full of glaring plot contrivances. Sure, it is not particularly refreshing while also feeling redundant at times, but it did its job as well as intended with considerable charm and spirit, and I like that anyway.

This entry was posted in Movies and tagged Comedy, Musical, Romance. Bookmark the permalink.