It took some time for me to appreciate the distinctive presence of Charlotte Rampling. As far as I remember, I noticed her for the first time through her supporting turn in “Angel Heart” (1987), and then I came to see more of her considerable talent through several notable films including “The Night Porter” (1974), “Farewell, My Lovely” (1975), and “The Verdict” (1982). As getting gracefully older with her edgy beauty and charisma, she became all the more interesting than before, and I certainly enjoyed watching her in a number of recent notable works such as “Never Let Me Go” (2010), “Melancholia” (2011), and “45 Years” (2015), for which she was belatedly nominated for Best Actress Oscar.

In case of “Hannah”, for which she won the Best Actress award at the Venice Film Festival in last year, Rampling did everything she was demanded to do, and she deserves praises for her committed performance which reminds us again of what a compelling actress she is, but, unfortunately, the movie is no more than a mere showcase of her talent. Decidedly drab and dreary in its austere storytelling approach, the movie does not provide much substance in terms of story and characters, and even Rampling’s admirable effort cannot compensate much for its frustratingly hollow impression.

In the movie, Rampling plays an old married woman named Hannah, and the first half of the movie shows us how her melancholic daily life becomes more desolate after her husband is incarcerated in a prison for a crime which is seldom discussed in the film. During their meeting in the prison, her husband says he is not guilty, but there later comes a moment when Hannah happens to discover a certain envelope hidden in their apartment. The movie does not show or tell us at all what is in the envelope, but it seems the envelope contains an incriminating evidence against her husband, so Hannah gets rid of the envelope once she checks its content.

Living only with a pet dog in her apartment, Hannah feels increasingly lonely and isolated, and she is sometimes disturbed by some of her neighbors in the apartment building. At one point, some woman knocks on the front door of the apartment, and that woman seems to want a serious conversation with Hannah, but the movie never clarifies that woman’s motive while merely implying that it is involved with the crime of Hannah’s husband. When Hannah notices that water is leaking from the ceiling, she naturally goes up to the apartment right above hers, but she only comes to discover a rather confusing and unpleasant situation, and you will be probably as baffled as I was during my viewing.

Meanwhile, she continues to work as usual in a slick modern house belonging to an affluent middle-class family. We see her cleaning the house, and we also come to gather that she is close to a young blind kid living in the house, though the movie never lets us have any clear understanding of her relationship with that kid. There is actually a small intimate scene where she comforts him through telling a story, but, to our frustration, that is all for us to observe.

In addition, Hannah attends an acting class along with several other people, and you may get little amusement from their teacher’s rather unconventional teaching method. It looks like they are practicing with some play, but the movie does not delve much into what they are handling. We often see Hannah and other students practicing together, but we never get any clear idea of what they are doing, and this is often quite frustrating to watch although we are later served with a brief but nice scene where Hannah demonstrates her good physical acting in front of others. 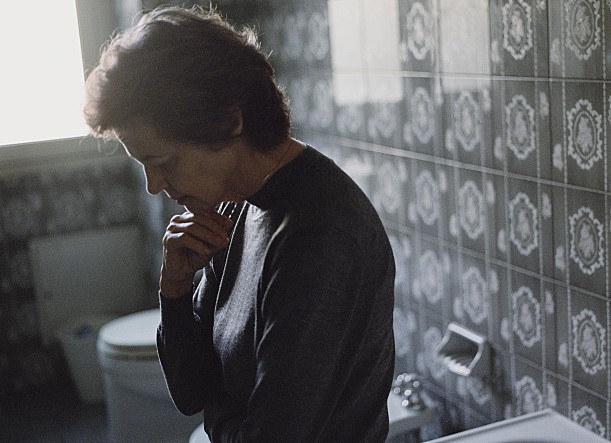 Around the midpoint of the movie, we get to know a bit about Hannah’s estranged relationship with her son and her son’s family. When her grandson’s birthday comes, Hannah goes to her son’s house with a cake and a present, but her son does not welcome her much for a reason revealed later in the movie, and he also prevents from her entering his house. After this painful moment, the movie cuts to a scene which shows Hannah quite saddened and devastated by her son’s rejection, and Rampling deftly handles her character’s irrepressible emotions in front of the camera.

All these and other elements in the movie could add up to something powerful enough to engage us, but the screenplay by director Andrea Pallaoro and his co-writer Orlando Tirado adamantly sticks to its barebone narrative without giving us anything to hold on. Hannah and other substantial characters in the film are never fully developed as human characters to interest us, and the movie does not even try to generate enough narrative momentum. As a result, we come to observe Hannah’s ongoing predicament from the distance without much care, and we accordingly become more aware of Rampling’s acting instead.

Overall, “Hannah” is one of the most disappointing movie experiences I had during this year, but it is not a total dud at least for a few reasons including Rampling’s performance, which is its saving grace in my inconsequential opinion. As shown from its smooth camera work and considerate scene composition, the technical aspects of the movie are commendable on the whole, and they certainly show that Pallaoro is a talented filmmaker. I can only hope that he will soon move onto something better than this bland misfire.

This entry was posted in Movies and tagged Drama, Husband and Wife. Bookmark the permalink.