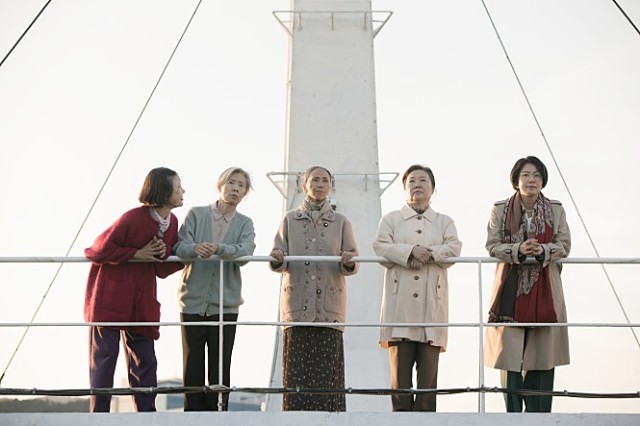 It is hard for me not to be emotional about the infuriating injustice reflected by the fictional drama of South Korean film “Herstory”, which is inspired by one significant real-life lawsuit against the Japanese government. During the World War II, many young Korean women were taken away from their families and then sexually exploited by the Japanese Army as ‘comfort women’, but the Japanese government has adamantly refused to apologize for this atrocity, and the remaining survivors are still suffering from their sad, painful past even at this point. Steadily focusing on the long, difficult process of that real-life lawsuit, the movie handles its subject with care and respect, and it often gives us emotionally powerful moments as watching how much its main characters try hard for their closure

Its story is mainly depicted through the viewpoint of Jeong-sook (Kim Hee-ae), a successful businesswoman running a travel agency in Busan, 1991. When she sees a TV news report on old women who were comfort women during the World War II, Jeong-sook does not care much about them while showing a little pity like many others would, but then she is asked by one of her friends to do more for those poor old ladies, and she reluctantly agrees to do that mainly for improving the public image of her travel agency, which recently gets into a legal trouble for a certain illegal activity for Japanese tourists.

And that is how she comes to learn a lot more about her old housekeeper Jeong-gil (Kim Hae-sook), who comes to Jeong-sook’s travel agency on one day for telling a secret she has kept to herself for more than 45 years. Naturally shocked by this unexpected revelation from Jeong-gil at first, Jeong-sook comes to regard Jeong-gil and many other survivors from a changed viewpoint, and she becomes more passionate about helping them than before. She actively searches for more surviving comfort women who are willing to talk about their horrible experiences, and then she come to represent Jeong-gil and several other survivors including Soon-nyeo (Ye Soo-jung), Gwi-soon (Moon Sook), and Ok-joo (Lee Yong-nyeo), who is apparently going through the early stage of dementia but still remembers well the horror she endured during that terrible time. 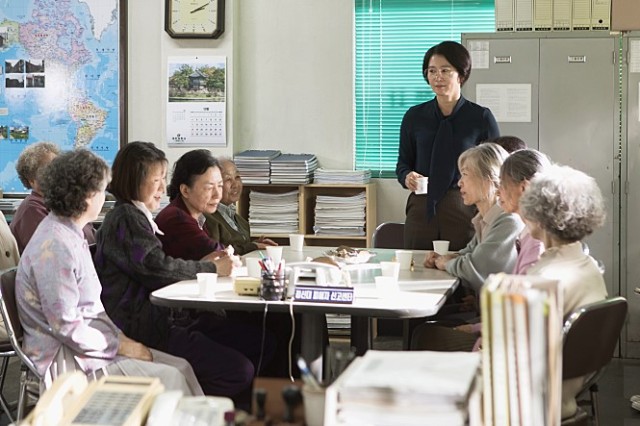 Of course, Jeong-sook soon faces a number of difficulties as putting more time and effort to this passionate social activity of hers. For examples, she loses a big Japanese client just because the client in question disapproves of what Jeong-sook is doing for Jeong-gil and other surviving comfort women, and her travel agency is considerably affected by this huge loss as a result. In addition, she frequently receives harsh responses from other South Koreans, and there is a bitter scene where she meets a survivor who had to exploit her fellow comfort women for her survival. Yes, what that woman committed is inexcusable indeed, but who can possibly blame her?

In the meantime, Jeong-sook meets Lee Sang-il (Kim Jun-han), a Korean Japanese lawyer willing to provide a pro bono legal service to Jeong-gil and several other survivors. He finds that there is a good opportunity for the lawsuit against the Japanese government, and, although there is not much chance of winning the lawsuit, Jeong-sook is ready to provide the full financial support for whatever is necessary for this very important lawsuit.

However, as the lawyer warns Jeong-sook, things do not go well for Jeong-sook and Jeong-gil and three other survivors from the very beginning when they arrive in a Japanese port city named Shimonoseki for attending the trial. While they have some local supporters, they are not so welcomed much by many Japanese people, and, above all, the process of the trial turns out to be far slower and longer than expected. They have to go back and forth between Busan and Shimonoseki more than ten times during next several years, and they accordingly become more frustrated and exasperated as wondering whether they can actually make a difference through this lawsuit. 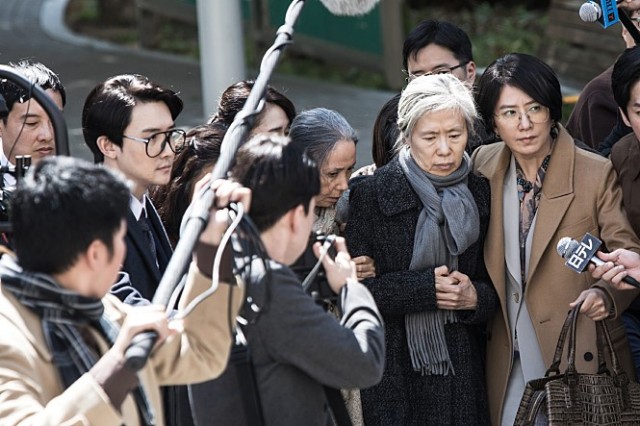 Although there are a number of obligatory dramatic court scenes including the one involved with a conflicted Japanese witness, the movie maintains well its calm, respectful attitude as conveying to us the pain and sadness of Jeong-gil and other surviving comfort women. When one of them phlegmatically talks about her unspeakable experience in the past, the movie simply listens to her along with other characters in that scene, but the result is one of the most touching moments in the film. While I think its last act is a little contrived, the movie continues to hold our attention nonetheless as arriving at the expected finale, and I appreciate its subdued but moving ending which reminds us again of the strong bond among Jeong-sook and the survivors.

Director/co-writer Min Gyoo-dong, who previously directed “All About My Wife” (2012), utilizes well his talented main cast members. While Kim Hee-ae holds the ground as required, Kim Hae-sook, Ye Soo-jung, Moon Sook, and Lee Yong-nyeo are commendable in their respective roles, and Kim Jun-han, who recently appeared in “Sunset in My Hometown” (2017), is also fine in his earnest performance.

Like other recent South Korean films “Snowy Road” (2015) and “I Can Speak” (2017), “Herstory” is a good movie which presents well one of many dark tragedies during the World War II, and it will make you reflect more on its subject via its thoughtful storytelling. I was well aware of what it intends to do, but I could not help but touched by its story and characters, and that is more than enough for me to recommend this solid drama film. 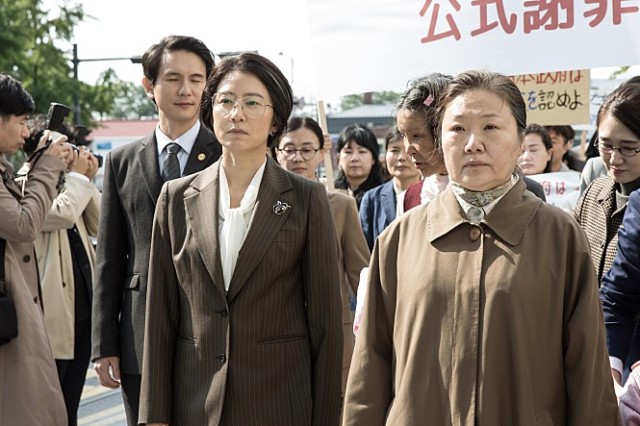