While looking relatively modest compared to other recent Marvel Comics Universe (MCU) movies, “Ant-Man and the Wasp” is a solid lightweight fun. Although it initially takes some time as trying to juggle many different story elements together during its first half, the movie eventually gets things rolling during its second half, and it delights and excites us while also making us have some expectation on what may come next after this.

The story begins at the time point which is around 2 years after what happened in “Captain America: Civil War” (2016). After spending some time in a prison for getting involved with Captain America, Scott Lang/Ant-Man (Paul Rudd) came back to San Francisco on condition that he would be on house arrest, so he has been stuck in his current residence for almost two years while occasionally spending some time with his young daughter Cassie (Abby Ryder Fortson), who currently lives with Scott’s ex-wife Maggie (Judy Greer) and Maggie’s boyfriend Paxton (Bobby Cannavale). As his house arrest period is nearly being over now, Scott is looking forward to being around his daughter more often than before, and he is also ready to work more with his three ex-con colleagues who have been running a small security company with him.

But then, as shown from the prologue scene of the movie, there comes a serious matter he must deal with. During the climax of “Ant-Man” (2015), Scott was hurled into the Quantum Realm as getting quite smaller, and his eventual safe return from that alternative dimension showed Dr. Hank Pym (Michael Douglas) and his daughter Hope van Dyne/Wasp (Evangeline Lilly) a small possibility that Dr. Pym’s wife Janet van Dyne (Michelle Pfeiffer), who was vanished into the Quantum Realm many years ago after her heroic last-minute sacrifice, is still alive. Although they have been currently hiding from the US government since Scott was arrested and then incarcerated, Dr. Pym and Hope have steadily studied and worked on that possibility during last two years, and now they really need some help from Scott, who turns out to be more involved in this matter than he thought at first.

Although he is well aware of the risk of being sent back to jail, Scott agrees to help Dr. Pym and Hope, but, of course, they soon come to face several big problems. While they certainly have to avoid getting arrested by an FBI agent who has been monitoring Scott, they also have to evade the pursuit of a black market dealer who wants to acquire Dr. Pym’s precious technology by any means necessary, and then there is a mysterious figure nicknamed “Ghost” (Hannah John-Kamen), who is literally like a ghost due to an increasingly unstable physical condition which is later revealed to be associated with Dr. Pym’s research.

As busily handling these and other characters in the film, the screenplay by Chris McKenna, Erik Sommers, Paul Rudd, Andrew Barrer, and Gabriel Ferrari loses some of its narrative momentum at times, but it diligently provides to us many humorous moments at least. Occasionally reminiscent of “Innerspace” (1987), the movie has a lot of fun with making various objects smaller or bigger, and that was enough for me to forget the law of conservation of mass and my rudimentary knowledge on quantum mechanics for a while. Yes, the Quantum Realm in the movie sometimes looks quite ridiculous in my inconsequential opinion, but I will not deny that I was amused by its outrageous aspects including the appearance of a certain micro-animal called Tardigrade.

Director Peyton Reed, who previously directed “Ant-Man”, did a good job of drawing the engaging performances from his main cast members. Deftly utilizing his everyman persona, Paul Rudd, who has shown his considerable comic talent since his supporting turn in “Clueless” (1995), is alternatively sincere and funny, and he is also complemented well by Evangelin Lilly, who is equally fine as bringing feisty spirit to her character. While ably supporting Rudd and Lilly, Michael Douglas provides a touch of class as required, and the same things can be said about Michelle Pfeiffer, who does not disappoint us at all when her character appears as expected later in the story. 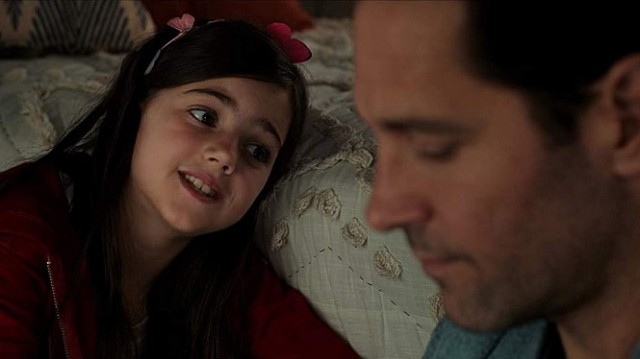 In case of the other notable performers in the film, most of them have each own moment to shine. While Judy Greer, Bobby Cannavale, and Laurence Fishburne are rather under-utilized, Walter Goggins is seedy and sleazy as the main bad guy of the movie, and Hannah John-Kamen is effective as an antagonist character desperately driven by an understandable motive. As Scott’s plucky daughter, Abby Ryder Fortson has a sweet scene with Rudd when their characters happen to have an honest and serious conversation, and Randall Park has a small amusing moment when his FBI agent character shows an unexpected side behind his by-the-book attitude.

As they did in the previous movie, Michael Peña, Tip “T.I.” Harris, and David Dastmalchian provide some of the biggest laughs in the film. While Harris and Dastmalchian are clearly having a ball with their respective roles, Peña, who drew my attention for the first time via his small but significant supporting role in “Crash” (2004), virtually steals every scene of his, and he is simply uproarious during one particular scene involved with a certain type of drug.

Although it is not something as ground-breaking as “Black Panther” (2018), “Ant-Men and the Wasp” provides a nice change in contrast to the ponderous seriousness of “Avengers: Infinity War” (2018), and I enjoyed its cheerful sense of humor and vibrant personality. It does not exceed my expectation exactly, but it still gives us a fair share of fun and entertainment, and I am totally fine with that.

This entry was posted in Movies and tagged SF, Superhero. Bookmark the permalink.