“Outside In”, which is currently available on Netflix, is a somber but intimate character drama revolving around one complex emotional circumstance. While its two main characters try to deal with this circumstance of theirs, the movie gives us a number of small but sensitive moments which show us more of their long emotional relationship, and it is poignant at times to see how much they care about each other.

The movie opens with a 38-year-old guy named Chris (Jay Duplass) experiencing his first day outside the prison after many years of incarceration. Around 20 years ago, he was arrested and then incarcerated in the prison after unfortunately getting involved in a serious criminal incident, and we later come to gather that he was not exactly responsible for what happened at that time, though the movie is rather vague about the incident in question.

Anyway, he is glad to be released from the prison mainly thanks to his old high school teacher Carol (Edie Falco), who worked hard for the release of her former pupil while frequently corresponding with him. When he arrives at his brother’s residence, Carol and many other people warmly welcome his return, and it looks like things will get a lot better for him.

However, like any ex-con who has just released from prison, Chris feels awkward and lonely while trying to adjust himself to the life outside the prison. As reflected by a couple of scenes where he attempts to get accustomed to advanced technology, things have changed a lot, and he does not know what to do next for his new life while often reminded of his current legal status. He has to be honest about his past while looking for jobs, and he also routinely goes to a local police station for drug test. 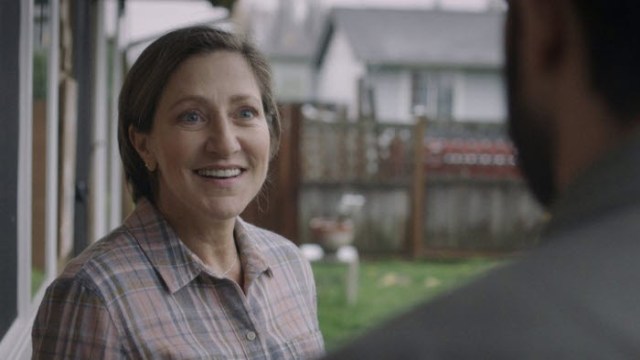 Naturally, he goes to Carol for emotional support and comfort, but Carol is not very willing to give that to him because he is free now and she has a family to take care of. Although she has been estranged from her husband as well as her adolescent daughter as focusing a lot on getting Chris released from the prison, she believes she still can fix her family problem, so she tactfully handles Chris when they come to have a private conversation in her car at one point.

Nevertheless, she clearly sees that Chris really needs help, so she allows him to get a bit closer to her family. While her husband is not so pleased about this, her daughter Hildy (Kaitlyn Dever) becomes interested in Chris because, well, she sees a fellow loner from him despite their considerable age difference. She shows him her private place located inside a nearby forest, and he is impressed a lot by her artistic sensitivity shown from her modest installation art piece.

As carefully establishing and then developing its main characters bit by bit, the screenplay by director Lynn Shelton and her co-writer Jay Duplass, who also participated in the production of the movie along with his brother Mark Duplass, never hurries in its leisurely narrative pacing, and it is a small pleasure to watch how its two main characters tentatively approach closer to each other. Although he is well aware of Carol’s complicated situation, Chris cannot help but want more support and comfort from her, and Carol finds herself more conflicted on what she exactly wants even while trying to solve her family problem. When she is frustrated with her family more than ever, she decides to go for whatever is wanted by her and Chris, but she still maintains her no-nonsense view on their relationship, and she later reminds him of why they should be practical about their circumstance.

Like any good character drama films, the movie depends a lot on its main performers, and they are engaging in their nuanced low-key performances. Edie Falco, who has not yet gotten any significant breakthrough in movies despite her acclaimed performance in TV drama series “The Sopranos” and TV comedy series “Nurse Jackie”, is fabulous whenever she conveys her character’s conflicted emotional state via subtle touches, and I especially like how she deftly handles a certain scene where her character frankly talks to Chris about her and his life. The scene is a little blatant in my inconsequential opinion, but Falco delivers it with honesty and sincerity, and we are accordingly touched at the end of this scene. 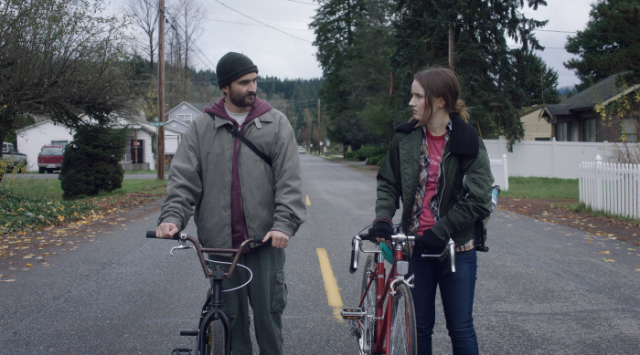 On the opposite, Jay Duplass did a commendable job of embodying the quiet sadness and awkwardness of his character. Steadily maintaining his character’s withdrawn attitude, he lets us understand his character’s growing emotional need, and we come to emphasize more with Chris as also discerning what Carol sees from him. I must say that the frequent shots of Chris riding his old bicycle are a bit too obvious, but Duplass brings considerable emotional depth to these symbolic moments, and he shows here that he is an actor as good as his brother.

In case of the supporting performers, their characters are less developed in comparison, but they are believable as the parts of the mundane daily life surrounding Chris and Carol. As another crucial part of the story, Kaitlyn Dever holds her own small place well around Falco and Duplass, and Ben Schwartz provides some humor as Chris’ loser brother.

As a movie slowly driven by its characters, “Outside In” will require some patience from you, but it is rewarding on the whole thanks to Shelton’s competent direction and her lead performers’ fine acting, and you will appreciate its nice intimate moments. It is surely your typical American independent drama film in many aspects, but it did its job well anyway, and I will not deny that I was moved in the end.

This entry was posted in Movies and tagged Drama, Ex-convict, Teacher and student. Bookmark the permalink.