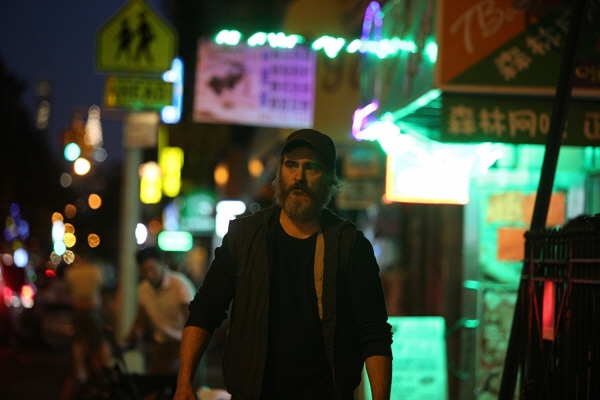 Often brutal and feverish, Lynne Ramsay’s new film “You Were Never Really Here” grabs our attention right from the very beginning with its vivid, striking mix of unnerving character study and grim noir thriller. Firmly sticking itself to its deeply disturbed and traumatized man who is somewhere between Lou Archer and Travis Bickle, the movie alternatively unnerves and fascinates us with a number of tense, harrowing moments of human darkness, and the result is one of the most unforgettable films of this year.

The movie begins at the point not long after its hero, named Joe (Joaquin Phoenix), finished his latest job. While living with his aging mother in their cozy house located somewhere in New York City, Joe works for a private detective, and his specialty is finding missing young girls who are usually caught in sex trafficking business. Although the movie does not show us much of how he got things done in his latest job, the close-up shots of a hammer and several other stuffs he subsequently discards are more than enough for us to sense the violent aspects of his current occupation, and we later notice a bruise and old scars on his body when he takes some rest in a sauna.

While Joe looks rather mild and tender when he is with his mother, there is always the gloomy intensity hovering around him, and the movie occasionally suggests his boiling inner struggle through brief flashback shots. He was apparently very unhappy due to his father’s domestic violence onto his mother, and we gather that there was also a traumatizing experience during his military tour in Afghanistan. Furthermore, it is apparent that he has seen many ghastly things as hurling himself into criminal world, and there is a brief but striking moment when a group of young girls on the street happen to evoke one of his unpleasant memories.

As Joe continues to struggle with his personal demons, there comes another case to be handled. The adolescent daughter of a prominent local politician has been missing for several days since she ran away from her home, and it is quite possible that she is caught in sex trafficking business. Because he is about to take a major forward step in his promising political career, her father wants to get back his daughter as soon as possible without making any fuss, and he gives some useful clues to Joe during their private meeting.

Although it takes some time, Joe eventually locates a clandestine place where the girl is possibly being held, and he immediately prepares for whatever should be done. Again, he buys a hammer and other usual stuffs which may be necessary for his job, and he patiently waits for an opportunity to break into that place in question. When he finally gets the chance and then goes into his usual violent mode, the movie phlegmatically and succinctly depicts his brutal actions from the distance while never allowing any cheap thrill or excitement, and the result is a sort of antithesis to “Taken” (2008) and other similar action thriller filcks.

When Joe finds the girl and then takes her to a safe place in the end, it looks like his job is done well, but, of course, he soon finds himself in a situation more dangerous than expected. I will not go into details here, but I can tell you instead that Ramsay’s screenplay, which is adapted from Jonathan’s Ames’ novella of the same name, will serve you with a series of chilling and devastating moments, which will definitely hold your attention tightly to whatever is going on around Joe.

As desperately trying to get out of this perilous circumstance, Joe’s mind becomes more agitated and disturbed than before, and Ramsay and her technical crew never hesitate to emphasize his increasingly unhinged psychological state. While cinematographer Thomas Townend subtly establishes nervous ambience on the screen, the editing by Joe Bini is superlative in its economical handling of actions and moods, and Jonny Greenwood’s atmospheric score provides extra nervousness to several key scenes in the film.

Joaquin Phoenix, who received the Best Actor award for this film at the Cannes Film Festival early in this year (the movie also received the Best Screenplay award, which it shared with Yorgos Lanthimos’ “The Killing of a Sacred Deer” (2017)), is simply compelling to watch. Especially since his memorable Oscar-nominated turn in “The Master” (2012), Phoenix has shown more skill and confidence as shown from several recent films including “Her” (2013) and “Inherent Vice” (2014), and he demonstrates here again that he is indeed a very talented actor to watch. While effortlessly embodying his character’s tortured soul, he is flawless in conveying his character’s vulnerability to us, and we come to care about not only Joe but also his relationship with a few other characters in the film.

As Phoenix diligently carries the film, several notable supporting performers hold each own small place around him. As Joe’s mother, Judith Roberts brings some genuine sweetness to her scenes with Phoenix, and that is the main reason why a certain scene later in the movie is quite poignant. As a girl who turns out to be much more than what she seems on the surface, Ekaterina Samsonov is solid with her elusive appearance, and Alessandro Nivola is suitably sleazy in his small but substantial supporting role.

Like Ramsay’s previous film “We Need to Talk about Kevin” (2011), “You Were Never Really Here” is an edgy and uncomfortable piece of work, but it is also quite absorbing mainly thanks to Ramsay’s top-notch direction and Phoenix’s electrifying performance. While it is essentially your typical arthouse film, it is a lot more interesting than those brainless action movies out there, and I think you will appreciate it a lot especially if you are looking for something new and different.

This entry was posted in Movies and tagged Crime, Noir, Thriller. Bookmark the permalink.