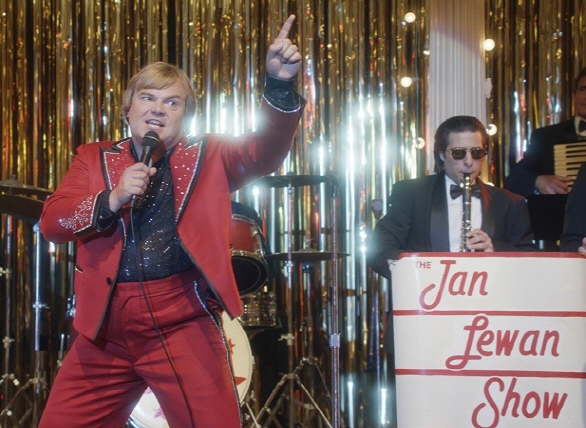 Based on a fascinating real-life criminal case, “The Polka King”, which is currently available on Netflix, tells us a goofy American tale of greed and delusion. Here is a nice guy who simply wanted to achieve his success as trying to reach for American Dream as much as he could, but he only found himself mired in more lies and deceptions, and we cannot help but amused as watching him going further and further with his criminal scheme for getting bigger and richer.

In the beginning, the movie shows the early struggling years of its hero Jan Lewan (Jack Black), a first-generation Polish immigrant who mainly works as the band leader of his modestly popular polka band in Pennsylvania. As a guy strongly believing in American Dream, Jan has tried hard for many years since he came to US, but his current situation is not exactly good for him. He wants to be a good father and husband, but he is frequently busy as trying to make ends meet, and his mother-in-law Bard (Jacki Weaver) is always ready to criticize him in contrast to his devoted wife Marla (Jenny Slate), a former beauty queen who believes in American Dream as much as her husband and often takes care of their small gift shop instead of him.

In case of Jan’s polka band, he and his band members seem to have a good time together as entertaining their audiences, but his friend/colleague Mickey (Jason Schwartzman) has a bad news for him. No matter how much Jan has tried with his brash, enthusiastic attitude, the business has not been that good for his band, and some of the band members, including Mickey, are considering leaving the band. 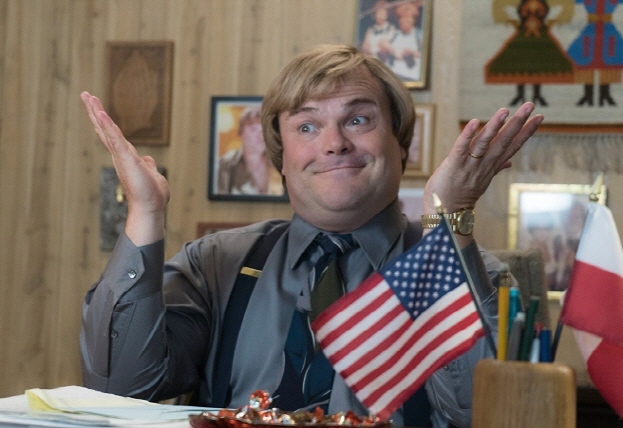 As being in the need of money more than ever, Jan soon embarks on a Ponzi scheme. As promising a significantly high interest rate, he convinces an old couple to invest a considerable amount of money into his business, and then more money comes into his hand as he attracts a bunch of other people who are also eager to get richer. While sincerely hoping that he will pay all the money back to his investors someday, Jan does not feel any qualms about freely spending money, and he is surely excited as he and his band becomes a lot more famous mainly thanks to his illegal wealth.

Of course, his Ponzi scheme comes to draw the attention of Securities and Exchange Committee (SEC), so he is subsequently visited by an SEC officer, who warns that he must give all the money back to his investors within three days. After checking his account book, Jan comes to realize that he is in a big trouble because there is not enough money available to him, but then he decides to do a bigger Ponzi scheme. After lying to the SEC officer, he promises another investment opportunity to his investors, and his investors are willing to give him more money.

As Jan’s financial crime grows bigger and bigger, the screenplay by director Maya Forbes and her co-writer Wallace Wolodarsky, which is based on Joshua Brown and John Mikulak’s documentary “The Man Who Would Be Polka King” (2009), provides a series of silly but hilarious moments. At one point, Jan plans a big group tour to various places in Europe including Vatican, and he even promises his tour members, who are mostly his investors, that they will have an audience with the Pope during their tour in Vatican. Although he is basically lying to them, he does not mind mainly because he firmly believes that he will make that happen, and what will happen in the end is a priceless moment I will not reveal here.

Another funny moment in the film is involved with Marla, who becomes dissatisfied with merely being Mrs. Lewan and then comes to decide to get her own fame through a local beauty contest. As a good husband, Jan is willing to do anything he can do for his wife, but then he goes a little too far when he sees that his wife does not have much chance of winning the contest.

Around that narrative point, the movie begins to lose its comic momentum, and, unfortunately, it does not recover much from that during the rest of the story. Compared to the wry hilarity of its first two acts, the third act is less funny as taking an expected narrative course, and the finale feels clumsy and half-baked without enough comic impact to linger on us.

At least, this weak aspect is compensated to some degrees with the solid performance from Jack Black and other main cast members in the film. Like “Bernie” (2011), another funny movie based on an outrageous real-life crime case, the movie gives Black another opportunity to expand the range of his acting talent, and he did a good job of balancing his flawed character between humor and sincerity. The supporting characters surrounding Jan are rather underdeveloped, but Jenny Slate, Jason Schwartzman, and Jacki Weaver hold their respective places well around Black, and Slate, who previously drew my attention via her breakthrough turn in “Obvious Child” (2014), has her own funny moment when her character happens to ramble about her discontent in front of many audiences.

Although it is not entirely successful on the whole, “The Polka King” is still an enjoyable comedy film in my trivial opinion. It could be sharper and more biting in its comic approach, but I recommend the film mainly for its several inspired moments and Black’s spirited performance, and you will probably enjoy its lively outrageousness as much as I did.