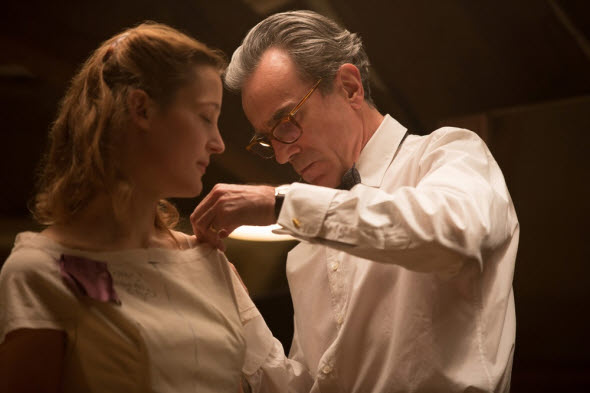 Precisely elegant and subtly intense, Paul Thomas Anderson’s new film “Phantom Thread” is a mesmerizing period chamber drama which draws our attention with its delicate and sumptuous moments at first and then unnerves us with dark psychological undercurrents beneath them. The movie is as tense as the works of Alfred Hitchcock while also being as sobering as the works of Ingmar Bergman, and it is a sheer pleasure to observe how it effortlessly glides along with its style and mood as firmed anchored by three fabulous performers at the center of the film.

Daniel Day-Lewis, who recently announced his retirement not long before the movie was released in US around the end of last year, plays Reynolds Woodcock, a renowned dressmaker working in London in the 1950s. Reynolds is a dedicated professional who has lots of pride in his work and artistry, and the early scenes of the movie show how his daily life and work are always under control for him as steadily managed by his sister Cyril (Lesley Manville), who is your average unflappable British lady and understands her brother better than anyone as his only close family member.

However, things are not exactly under control in case of his latest romantic relationship. While he has lost interest in his current lover Johanna (Camilla Rutherford, who holds her own small place well during her brief appearance), she has been frustrated with his detachment and self-absorption, and Cyril is ready to handle their eventual separation. To her and her brother, Johanna is just another pretty young woman passing through their house, and Reynolds happily continues to focus on his work while not disrupted as usual.

But then there comes another woman into his life. While he spends some free time outside London, he drops by a hotel restaurant, and that is where he comes across a young waitress named Alma Elson (Vicky Krieps). As he orders a meal in front of her, something instantly clicks between them, and then they come to spend more time with each other. While Reynolds is attracted to her plain beauty to be dressed by him, Alma enjoys the gentle attention from him, and there is a tender, sensitive moment when he shows her a bit of his professional skill in the workroom of his countryside cottage.

Not long after that, Alma begins to live in Reynolds’ London residence as his latest lover, and, not so surprisingly, she soon comes to face the difficulties of living with him. She is willing to move their relationship to the next level, but that is certainly the last thing he wants, and he firmly sticks to his egoistic attitude and stiff lifestyle as further frustrating her. While their romantic feeling still seems to remain when they defiantly retrieve a dress from one superficial customer together, he and she come to clash harshly with each other when she tries to bring a big change into their relationship at one point, and that is the point where their situation begins to get darker.

Even after that narrative point, the movie maintains its elegance and subtlety as before, and Anderson, who not only wrote the screenplay but also worked as the cinematographer of the movie, continues to treat us with lovely visual moments shining with precision and clarity. Thanks to its first-rate production design and costume, the period atmosphere on the screen is flawless while filled with authentic details to admire, and Jonny Greenwood’s classical score effectively accentuates the characters’ emotions churning beneath the surface.

The three main performers of the movie are all terrific in their respective fine performances. As meticulous and focused as ever, Day-Lewis perfectly embodies his character’s prim appearance and aloof egoism, and that is why the eventual disintegration of his character’s composed veneer is dramatically impactful. In one crucial scene later in the movie, Reynolds does not say anything at all, but his silence speaks volumes thanks to Day-Lewis’ deftly modulated acting, and the resulting emotional intensity is overwhelming to say the least.

As Reynolds’ no-nonsense sister, Lesley Menville, who previously drew my attention through her devastating supporting turn in Mike Leigh’ “Another Years” (2010) and deservedly received an Oscar nomination along with Day-Lewis (the movie received total six Oscar nominations including the ones for Best Picture and Best Director, by the way), gives an equally nuanced performance to behold. While usually looking as frigid as Judith Anderson in “Rebecca” (1940), Menville slowly reveals her character’s human qualities through her subtle acting, and you may wonder whether Cyril knows a lot more about what is going on between Reynolds and Alma than she seems.

In case of Vicky Krieps, a rather unknown Luxembourgian actress who previously played small supporting roles in “Hanna” (2011) and “A Most Wanted Man” (2014), she is simply astonishing for being an equal acting match for her co-star, and it is really compelling to watch how she gradually takes the center besides Day-Lewis. I think this movie will be her career breakthrough, and I will not be surprised to see her becoming as prominent as Alicia Vikander or Léa Seydoux within a few years.

While it may require some patience from you, “Phantom Threads” is another fascinating work from Anderson, who has always intrigued and excited us with his distinctive works. While I was baffled by “The Master” (2012) and “Inherent Vice” (2014), I appreciated their admirable qualities despite that, and I was certainly impressed by the sheer ambition of “Boogie Nights” (1997), “Magnolia” (1999), and “There Will Be Blood” (2007), which is incidentally fueled by another memorable performance from Day-Lewis. As I said before, again, I have no idea on what will come from Anderson next, but I will savor and cherish numerous good things in “Phantom Threads” for now. 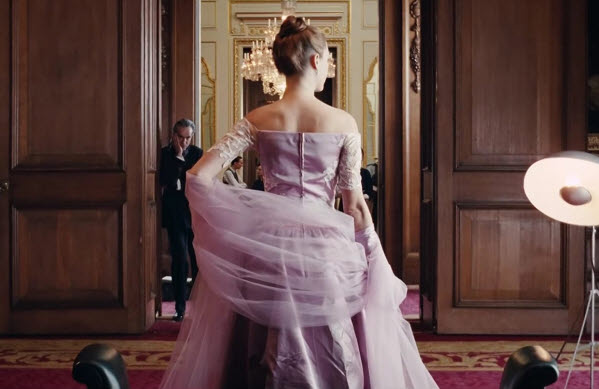 This entry was posted in Movies and tagged Dressmaker, Romance. Bookmark the permalink.