“Marjorie Prime” is a somber, intelligent SF chamber drama which turns out to be more intriguing and thoughtful than I expected. While it shows its theatrical origin at times, the movie is an engaging intellectual experience nonetheless, and it is a small pleasure to observe how it neatly handles its cerebral subjects as leisurely moving from one narrative point to another.

In the beginning, we meet an old woman named Marjorie (Lois Smith). While she mostly looks all right on the surface, she is in fact going through the early period of Alzheimer’s disease, and she is well aware of that at least as going through her peaceful daily life as usual in a nice beach house along with her daughter Tess (Geena Davis) and Tess’ husband Jon (Tim Robbins), who have taken care of Marjorie along with her personal nurse Julie (Stephanie Andujar).

While there is no one around her in the house, Marjorie frequently talks with her husband Walter (Jon Hamm), who died many years ago but has been a part of her daily life thanks to advanced computer technology. Whenever she needs him, the vivid hologram image of his younger self appears in front of her, and he is always ready to listen or talk to her.

Although she knows well that ‘Walter Prime’ is not real Walter, Marjorie cannot help but become nostalgic while sweetly talking to him, and their conversation usually revolves around her old memories of Walter. She talks about a family dog she and Walter once had. She recollects that precious moment when Walter proposed to her. And she also dearly remembers one beautiful winter day she and Walter had a long time ago, though it will be bound to be forgotten along with many other precious pieces of memories in her fading mind. 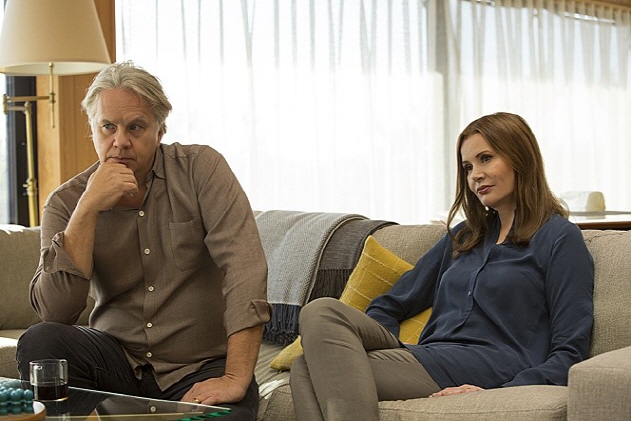 As comforting Marjorie as usual, Walter Prime comes to learn more about the man he is programmed to imitate, and he accordingly looks and feels more real to her as time goes by. Watching this rather uncanny progress, we cannot help but wonder. Can he be possibly regarded as something real? Is he merely a projection of how real Walter is remembered by Marjorie?

Meanwhile, the movie also pays considerable attention to Tess and Jon. While struggling with her own family problem, Tess feels more nervous as watching the growing relationship between her mother and Walter Prime, but she cannot deny that he will be more important to her mother as time goes by. In contrast to his wife, Jon is more supportive of Marjorie and Walter Prime’s relationship, and he even supplies additional facts about his dead father-in-law to Walter Prime during their private conversation.

Now I should be more careful about describing the plot, whose main entertainment comes from how it is developed into something more complex step by step. I will not dare to go into details here, but I can tell you instead that director Michael Almereyda, who previously impressed me with “Experimenter” (2015), did a good job of adapting Jordan Harrison’s Pulitzer Prize-nominated play of the same name. While many scenes of the movie are set inside the beach house in the film, the movie never feels stuffy or confined, and the occasional outdoor scenes do much more than generating the sense of place. Filled with gray melancholic mood, they effectively reflect the elegiac aspect of the story, and that is further accentuated by Mica Levi’s moody, tentative score on the soundtrack.

Like any movies based on stage plays, the movie depends a lot on the talent of its main cast members, and they are all solid in their respective roles. Lois Smith, an 86-year-old veteran actress who appeared in many notable films after making her debut in “East of Eden” (1955), certainly knows her character well because she previously played her character in the original production of Harrison’s play, and she effortlessly embodies her character right from her first scene. Thanks to her deft performance, Marjorie comes to us as a vivid human character to observe, and it is also interesting to watch how Smith brings subtle nuances to her performance later in the story.

On the opposite, Jon Hamm, who has recently been more familiar to us thanks to his acclaimed TV series “Mad Men”, is smooth and dapper as required, and he brings some poignancy to his artificial character who will certainly remind you of other similar SF films such as “Her” (2013). We can always feel the gap between Walter Prime and other characters in the film, but then we observe how much they project their human feelings onto him, and Hamm’s low-key performance effectively functions in that aspect.

As two other crucial parts of the story, Geena Davis and Tim Robbins show that they have lost none of their talent although they have been somehow less prominent during recent years. While Davis ably conveys to us her character’s troubled state of mind, Robbins gradually holds the ground for his co-performers, and Stephanie Andujar is also fine in her small supporting role.

Although it may require some patience from you due to its slow narrative pace, “Marjorie Prime” is rewarding on the whole thanks to its good mood, smart storytelling, and nuanced performances. As reaching to its modest goal, the movie intrigued me enough during my viewing, and I came to muse on its haunting finale for a while. It is not exactly refreshing, but it does its job as well as intended, and you may admire it as much as I do.

This entry was posted in Movies and tagged Alzheimer's disease, Artificial Intelligence, SF. Bookmark the permalink.