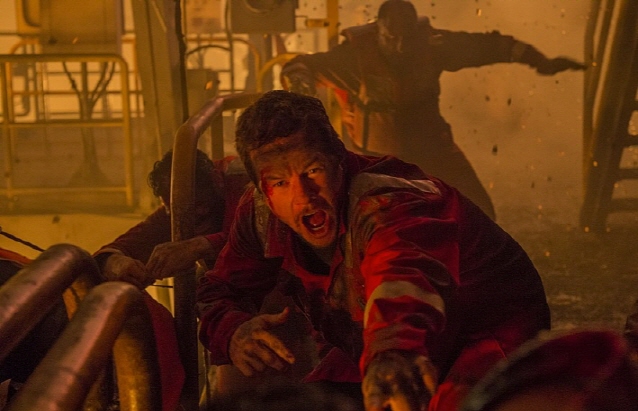 When I heard the news about the explosion on Deepwater Horizon for the first time, I was about to begin the first day of the 2010 Eberfest along with my critic friends and acquaintances. I thought it was just a minor accident which would be taken care of within a few days, but, as many of you know, its disastrous consequence lasted for next several months, and it eventually became the biggest oil disaster in the US history, with about 210 million gallons (about 794 million liters) of crude oil spilt into the gulf of Mexico.

Mainly focusing on how that catastrophic accident happened, “Deepwater Horizon” tries to be vivid and realistic, and it is successful to some degrees considering a number of intense moments, but it disappointingly stays on the level of standard disaster film. While we certainly see dangers on the screen as many characters are suddenly and helplessly thrown into their perilous circumstance during its second half, its story is rote and platitudinous due to thin characterization and numerous clichéd elements, and it ultimately feels rather hollow and superficial as being no more than a mere recreation of one devastating real-life incident.

The early scenes of the movie introduce several key figures of the story one by one. In the beginning, we see Mike Williams (Mark Wahlberg) starting the morning of April 20th, 2010 along with his dear family, and we get some basic information about his oil drilling job via his little daughter who is eager to present her father in her school class. He is going to begin his 21-day-stint on an oil drilling rig located at a spot which is 41 miles (about 66 km) southeast off to the Louisiana coast, and everything looks fine and usual as he rides a helicopter along with other crew members including Jimmy Harrell (Kurt Russell) and Andreas Fleytas (Gina Rodriguez). 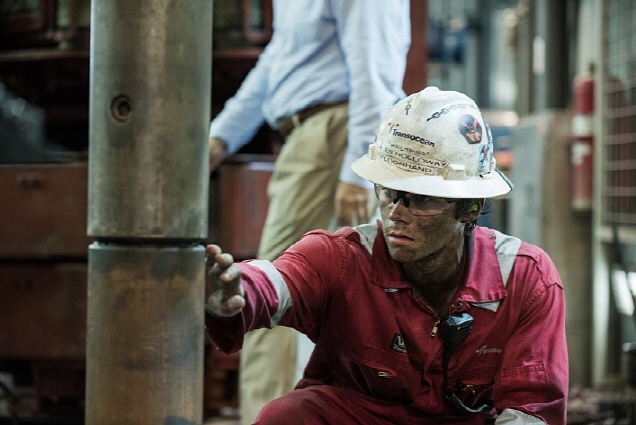 However, there is already a trouble on the rig, and the first half of the movie invests considerable time on how the situation gets worsened as time goes by. After learning about the serious safety negligence associated with the concrete foundation of the oil well, Harrell, who is the chief supervisor of the rig, wants to do a pressure test before starting the drilling process, but then he has to persuade Donald Vidrine (John Malkovich), a short-sighted BP executive who only cares about how much financial loss the delayed process can cause to his company. Vidrine wants to start the drilling process as much as possible, so he willingly ignores bad signs even as Harrell and other crew members have more reasonable doubts on the safety of the drilling process.

Looking here and there around the rig, the movie tries to present a big picture of how the rig is operated by its crew members, and it does a fairly nice job of giving us some technical details without confusing us, but it falls short in terms of characters. While the main characters do not have any notable human quality to engage us, the other characters in the film are defined only by their work and position, and we only come to observe all these characters from the instance without much interest in them – even as we are more aware of the accumulating danger below them.

The cast of the movie do as much as they can do with their characters. In case of more recognizable performers like Mark Wahlberg, Kurt Russell, John Malkovich, and Kate Hudson, they carry their roles via each own presence, but their characters remain to be mediocre at best and anonymous at worst. Wahlberg and Russell surely fit to their respective roles considering their working class screen persona, but their earnest efforts cannot compensate for their inherently flat, bland characters. Malkovich is suitably despicable, but then there is nothing much he can do besides that, and it is really disappointing to see this wonderful performer wasted in an one-dimensional role. Hudson is stuck with the most thankless job in the film, and I must say that her perfunctory role cannot possibly be improved by any other female performer out there. 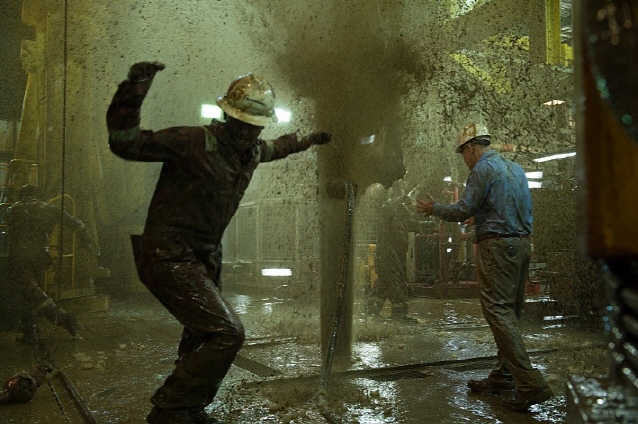 In comparison to the first half, the second half of the movie works better once all hell breaks loose on the rig. The director Peter Berg and his crew pull all the stops during the explosion sequence, and the result is quite impactful to say the least. As mud, water, and oil are rapidly and mercilessly spurted from the well below, we can really sense the ensuing panic and chaos around the characters on the screen, and then the sequence eventually culminates to a big explosion which turns the rig into a big, fiery mess.

This is indeed impressive in technical aspects, but then the movie gets lost amid lots of crashes and bangs in the end. As the characters in the film struggle to survive, most of them are usually indistinguishable from each other while the movie throws more special effects around them, and it is also often difficult to tell what is going on the screen because of busy, frantic editing and shaky camerawork.

While I did not like Berg’s previous film “Lone Survivor” (2013) much, that movie shows that Berg is a competent director who knows how to handle action scenes effectively, and the several scenes in that film actually made me cringe for their visceral physical impacts. “Deepwater Horizon” does deliver the impacts of a similar degree, but it is hampered by its weak story like “Lone Survivor”, and it eventually fails to convey us the tragic scale of its subject. It is probably worthwhile to tell the story of the people who were in the middle of that hellish pandemonium, but the movie merely scratches the ground into which it wants to dig, and, to our disappointment, that is all. 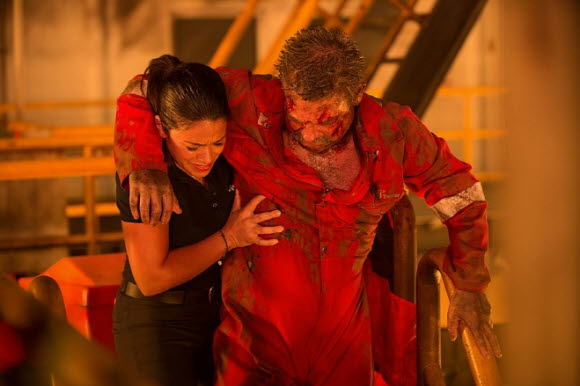 This entry was posted in Movies and tagged Disaster, Real-life incident, Real-life story. Bookmark the permalink.