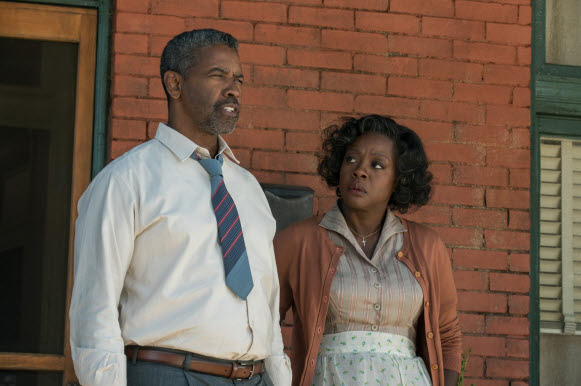 “Fences” trusts its performers, and we gladly go along with that. Even if you are not that familiar with August Wilson’s Tony and Pulitzer Prize-winning play, you can easily notice a number of theatrical aspects on the screen, but this is a solid, respectable movie adaptation packed with powerful scenes, and it wisely allows enough space for its exceptional cast while never interrupting their fabulous performances. Right from the beginning, the performers are convincing as inhabiting their characters’ small, specific world, and we accordingly become involved in their characters’ universal human matters which are touchingly presented in the film.

Set in Pittsburgh, Pennsylvania in the 1950s, the movie opens with another usual working day for its African American hero Troy Maxson (Denzel Washington) and his close friend/co-worker Jim Bono (Stephen McKinley Henderson). They are waste collectors, and we learn from the opening scene that Troy has hoped that he will drive a garbage truck someday instead of working at the tail of truck. His friend is skeptical for good reasons; beside the fact that Troy is black, he does not have a driving license, and he even cannot read.

Anyway, life has been fairly good for Troy at his house located in a black neighborhood of the city. There was a time when he was young and wild and subsequently went to a prison for his crime, but he has been in a stable relationship with his wife Rose (Viola Davis) for 18 years since he married her not long after his release from the prison. When their working hour is over, he and Bono go to the backyard of Troy’s house, and that place is where he can be the center of the universe at least for a while with a bottle of gin in his hand. Bono and Rose watch and listen to Troy with occasional amusement and knowing looks; they have probably seen him telling same things many times, but they do not mind that as two people who have known for him for a long time.

To his two different sons, Troy is often harsh and severe in the name of tough love, and we see how that attitude of his frustrates his sons. When Lyons (Russell Hornsby), the son from Troy’s previous relationship, comes to Troy’s house for borrowing some money from his father, the situation becomes less pleasant for everyone in the house as Troy refuses to borrow the money to his son. As a man who believes in hard, diligent working, he sees no good from his son’s musician career, and he even rejects an opportunity to see his son’s performance at a local club.

In case of Cory (Jovan Adepo), the high school athlete son of Rose and Troy, he recently gets a good opportunity which may lead him to not only higher education but also professional football career, but Troy adamantly blocks his son’s way mainly because of his own bitter experience in the past. He once played in the professional Negro Leagues briefly after discovering his athletic talent in baseball while serving his time in the prison, but he could not go up to the Major League because it was the time before Jackie Robinson. As reflected by his frequent use of baseball terms, he still clings to his lost dream, and it is also implied that he envies his son’s chance for athletic success.

While Cory’s resentment toward his stern father grows further as a result, there comes a crisis for Troy and Rose’s relationship. It turns out Troy has had an affair with some other woman, and, as Bono tactfully points out to him during their private conversation, he should face the consequence of his indiscretion now. When he confesses everything to her, Rose naturally feels hurt, and there is a devastating moment when she angrily responds to her husband’s pathetic excuse during their argument. She has always stood by her man while putting up with lots of things, but now she is not so sure about their relationship as struggling with her anger and confusion.

The movie is the third feature film directed by Denzel Washington, who previously directed “Antwone Fisher” (2002) and “The Great Debaters” (2007). Those two wholesome films showed that he is a good filmmaker besides being one of the best American performers, and he did a modest but commendable job of bringing Wilson’s play to the screen here in this film. While its many scenes are unfolded in and around Troy’s house with some stagy touches, the movie seldom feels constrained within its small background, and we always get the sense of ongoing life around the characters in the film thanks to the considerable realism generated from its authentic period atmosphere.

Washington and the other performers in the movie ably deliver the undeniable emotional power of Wilson’s adapted screenplay (Wilson wrote it before his death in 2005). Washington, who played Troy in the 2010 Broadway revival and won a Tony for that, certainly has several juicy moments as his complex hero captivates us with his good and bad sides, but he also has his fellow cast members hold each own place around him. Stephen McKinley Henderson, Russell Hornsby, Jovan Adepo, and Mykelti Williamson (he plays Troy’s veteran brother who is mentally impaired due to his war injury) are all fine in their respective roles, and Viola Davis, who acted along with Washington, Henderson, Hornsby and Williamson in the same Broadway revival and won a Tony like Washington, is impeccable as Washington’s equal acting match, especially during the aforementioned scene between Troy and Rose.

While it is not completely free from its theatrical origin, “Fences” works well thanks to its competent direction and top-notch performances, and I will not be surprised if the movie receives Oscar nominations for Washington and Davis on next Tuesday. This is an intelligent and thoughtful family drama, and it is surely something you cannot encounter at movie theater everyday.

This entry was posted in Movies and tagged Father and son, Husband and Wife. Bookmark the permalink.