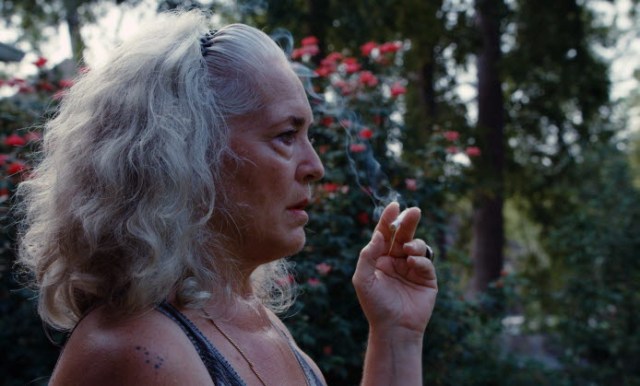 The opening shot of “Krisha” caught me off guard during my first viewing. At the beginning, ominous music is played on the soundtrack, and then there comes the close-up shot of an old woman who clearly looks disturbed and devastated. Watching her unnerving glare on the screen, I could not help but think of a similar scene in Stanley Kubrick’s “The Shining” (1980). Remember that disturbing scene where Jack Nicholson’s character rigidly glares at something for a while?

Although I assure you that “Krisha” is actually not a horror movie but a small family drama, it does feel like a horror movie from time to time as observing what may be another bad day of its deeply troubled heroine. The more we get to know about her, the more it is apparent to us that she is a walking mess of troubles, and we cannot help but brace ourselves as watching her in an environment which is not suitable for her at all for good reasons.

At first, Krisha (Krisha Fairchild) believes that she can control herself well for the upcoming family dinner on Thanksgiving Day, and everything seems to be fine as she arrives at a big suburban house where her sister Robyn (Robyn Fairchild) lives with her family. Other family members are already there, and they all greet Krisha along with Robyn, but we come to gather that Krisha has been a black sheep of the family for many years due to her alcohol and drug addiction problem. It is implied that she was not a very good mother to her son Trey (Trey Edward Shults) in the past, and she really wants to reconnect with her estranged grownup son through this time.

However, her current condition is not so ideal to say the least. Krisha manages to look sober and well on the surface, but she constantly feels agitated just like many alcoholics without drink. Her private metal box is full of medicine pills which are probably for calming her nerve, and we notice the missing tip of her right index finger covered in a bandage. When she later leaves a voice message to a guy who is probably her boyfriend, it looks like she recently hit another bottom and made a big mess again as a consequence. 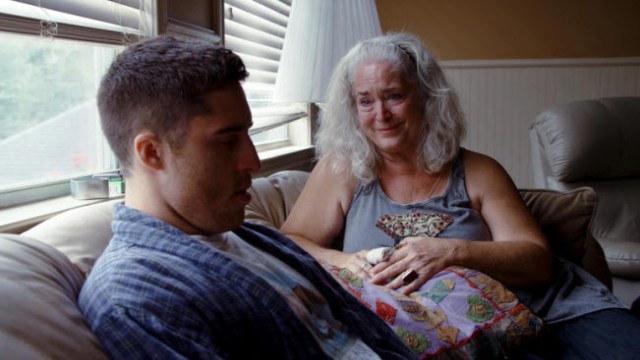 As many of her family members are busy with preparing for the dinner or watching a football game on TV, Krisha participates in cooking a big turkey to be served, and she feels a bit better as being around her family members, but she still remains on the edge while being in the middle of the noisy domestic environment. She finally gets a private moment with her son, but then she overlooks how much her son has felt hurt by her mistakes in the past, and that certainly puts another strain on her unstable mind, which feels more like a ticking bomb as the dinner time approaches.

For effectively reflecting its heroine’s nervous state of mind, the director/writer/editor Trey Edward Shults tries some notable stylish touches. Via sound design and editing, the movie throws us into disorienting moments especially during its early part, and the sense of confusion and nervousness is further accentuated by Brian McOmber’s edgy, percussive score. Some of you may be flabbergasted by this offbeat approach and find it rather gratuitous, but I think it serves well the drama of the movie, because, besides surely making the movie feel as jumpy as its heroine, it helps us sensing more of the emotional tension around her and the other characters in the film.

As his camera unobtrusively stays or moves around Krisha and the other characters in the film like another guest in the house, the cinematographer Drew Daniels gives us a number of impressive visual moments including the long-take opening scene, and I also appreciate how he and Shults effortlessly utilize three different screen ratios for dramatic effects. As far as I could see, the movie never looks rough or cheap, and I was later surprised to learn that it was actually shot during only 9 days. 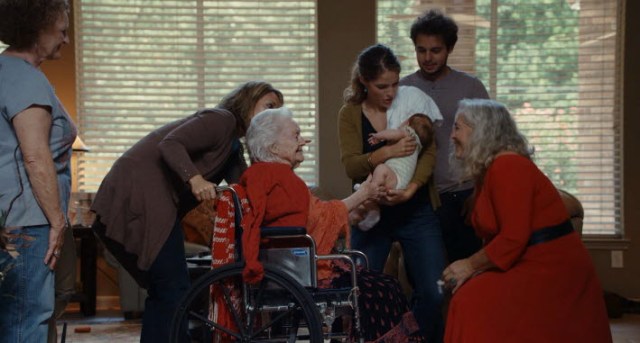 Consisting of both professional and non-professional performers, the cast look uniformly believable as family members with a long history among them, even when we cannot exactly grasp how they are related to each other. As a matter of fact, Krisha Fairchild is Shults’ aunt while Robyn Fairchild is his mother, and Trey’s grandmother in the film is played by Shults’ grandmother, who is really as senile as shown in the movie.

Full of raw spontaneity and emotional intensity reminiscent of Gena Rowlands in John Cassavetes’ “A Woman Under the Influence” (1974), Krisha Fairchild is utterly captivating in an honest, fearless performance which may be a breakthrough for her long acting career. Krisha is frequently unlikable and pathetic, but she comes to us as a flawed, complex character to observe thanks to Fairchild’s compelling nuanced acting, and we come to understand Krisha’s desperate human need at least. In case of supporting performers, Robyn Fairchild holds her own place well as Krisha’s caring sister, and the special mention goes to Bill Wise, who gives a colorful supporting performance as a sardonic family member who does not like Krisha much.

“Krisha” is not a comfortable film to watch at all, but it is one of most harrowing dramas about addiction I have ever seen during recent years, and it will give you some human understanding on how alcoholics can cause troubles for not only themselves but also people around them. In my humble opinion, Krisha really should begin to take the twelve steps of Alcoholics Anonymous for herself and others, and I hope she will agree to that. After all, it is never too late as long as you are alive, isn’t it? 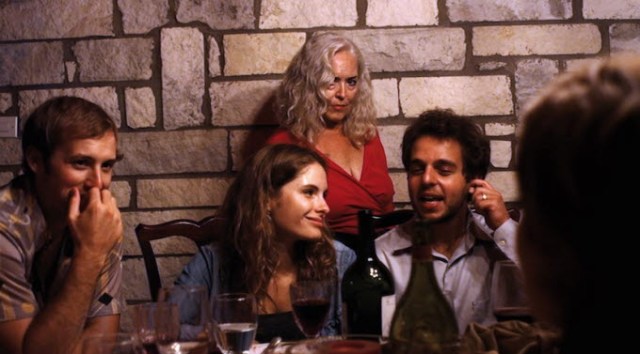 This entry was posted in Movies and tagged Addiction, Alcoholism, Family. Bookmark the permalink.