A real-life criminal story dramatized in Argentine film “The Clan” is both disturbing and compelling to say the least. Here is the man who is not only a ruthless criminal but also an ordinary middle-class father, and we cannot help but observe his horrible deeds with morbid fascination, while also chilled by how his plain, normal appearance is maintained on the outside by himself and his family members who get involved in his crime in one way or another.

He is Arquímedes Puccio (Guillermo Francella), a middle-aged guy who has some shady connection with the Argentine intelligence service as reflected by his first scene in the film. What he did during that fearful period of the military regime during the 1970s is not explained well in the film, but now he is no longer in service while the Falklands War is over with Argentina’s defeat in 1982, which marked the beginning of the end of the regime.

We meet his family residing in a quiet neighborhood of Buenos Aires, where Puccio runs a small family deli. He has a wife and five children, and his eldest son Alejandro (Peter Lanzani) is a popular rugby athlete who plays for the Argentina National Rugby Union team. Handsome and amiable, Alejandro frequently hangs around with many other young guys, and some of them are incidentally from wealthy families.

That makes Alejandro very useful when Puccio and his cohorts kidnap one of Alejandro’s rich friends. Once they catch their target through a little help from Alejandro, Puccio calls his hostage’s concerned family for demanding ransom. The hostage is blindfolded and locked up in a small upstairs room in Puccio’s house, and there is a gradually unnerving scene in which the camera fluidly presents the domestic activities inside the house in an uninterrupted fashion while he is about to give a meal to the hostage. His wife has no problem with assisting her good husband while not asking too much, and Alejandro and his siblings are always in the firm grip of their loving but authoritative father as shown from their routine dinner scenes, though one of them left the family some years ago.

As finding himself becoming more than an unwitting accomplice of his father, Alejandro naturally feels conflicted, but he goes along with his family anyway as they enjoy the comfort and luxury based on his father’s continuing criminal business. Their deli is changed into a windsurfing equipment shop, and Alejandro keeps being a popular guy as before. He also falls in love with a nice girl when she happens to drop by the shop, and they soon get pretty close to each other, but he knows too well that he must share his dark family secret with her sooner or later if he is really serious about their relationship.

Because the opening scene shows how everything eventually begins to crumble down for the Puccioes, we already know where the story is heading, but the director/screenplay writer Pablo Trapero, who received the Silver Lion award for his film at the Venice International Film Festival in last year, keeps our attention held tight to a number of vivid, tense moments in his film. Julián Apezteguia’s terrific cinematography and the editing by Trapero and Alejandro Carrillo Penovi are flawless without calling attention to themselves. The soundtrack consisting of various recognizable pop songs is colorful and exuberant, and, like the bright, affluent daily life of the Puccioes, it often functions as a darkly humorous counterpoint to the stark horror of kidnapping, confinement, and murder, 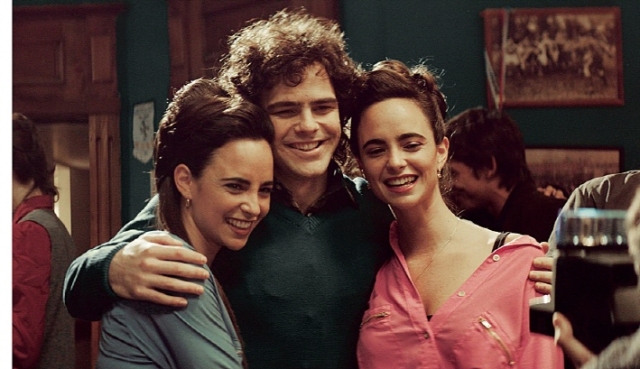 It is implied that Puccio is allowed to get away with his crimes by some powerful people he worked for in the Argentine intelligent service, and there is a clear parallel between the Argentine society during that time and Puccio’s household. Like Argentine people looked away from many disappearances under the military regime during that time, Alejandro and his other family members choose to look the other way just because that is easy and convenient for them. The movie is rather vague about how much some of Alejandro’s siblings actually know about what their father does behind his back, but then there comes a point when no one in the house can possibly ignore what is being heard from their newly renovated basement – and their world is changing outside in the meantime as returning to democracy.

Looking completely different from his substantial supporting turn in Oscar-winning film “The Secret in Their Eyes” (2009), Guillermo Francella’s chilly understated performance subtly exudes pale intensity mixed with a wry sense of humor, and he is quite good during a few moments when his character happens to break away from his usual detached mode. Although Alejandro is basically a blank paper onto which his father’s evil is projected, Peter Lanzani holds his own place opposite to Francella, and he and Francella are particularly convincing during a twisted private conversation between their characters. The father exactly knows how to push buttons inside his weak-willed son, and he surely gets what he wants, though he probably did not expect what happens not long after that.

“The Clan”, which was Argentina’s official submission to the Academy Award for Best Foreign Language Film in last year, is a tough, cold-blooded stuff easier to admire than like. I was not wholly involved in its story, but, considering its strong points, I come to conclude that it did its jobs as well as intended on the whole, so I give mild recommendation with reservation. After all, aren’t they such a horribly interesting family to watch?