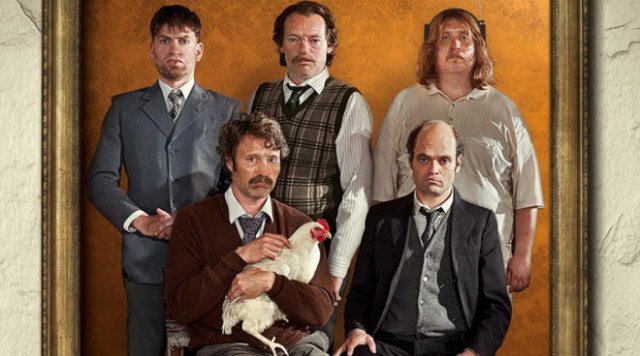 Danish film “Men & Chicken”, which was submitted to the Academy Award for Best Foreign Language Film in last year, is utterly bizarre and outrageous from the beginning to the end. As a movie not just literally about men and chicken but also about some truly nutty things you have to see for yourself, it will definitely require you to have some sense of humor for appreciating many weird moments driven by its congenitally flawed characters. To be frank with you, I want to stay away from them as much as possible, but it is a sort of twisted fun to watch them struggling with their newly discovered family connection.

At the beginning, we meet two brothers who cannot possibly be more different from each other. While Gabriel (David Dencik), who is a college professor, is the more thoughtful and rational one, Elias (Mads Mikkelsen) is capricious and compulsive with the apparent lack of temperament control. When we see Elias for the first time, he is having a blind date with a psychiatrist he contacted via online, and he thoroughly ruins the evening as he impulsively turns the date into an impromptu counseling session. After that disastrous meeting, he goes to a toilet for masturbation, and I must tell you that this is not the only time when we watch him following his, uh, nature’s call.

Around that point, Gabriel sits beside their dying father at a hospital. Not long after their father is eventually dead, Gabriel finds a video tape, which contains a startling revelation from his father. Both Gabriel and Elias are actually half-brothers who were adopted together when they were young, and they were the sons of Evelio Thanatos, a scientist who was doing some genetic research in the Island of Ork when he gave away his sons to Gabriel and Elias’s stepparents for an unknown reason.

Curious about their real father, Gabriel and Elias travel to that remote island whose current population is a little more than 40. While riding on a ferryboat to the island, they come to learn that Dr. Thanatos had other three sons who are still living in an old, abandoned sanatorium belonging to Dr. Thanatos, and Gabriel is eager to meet his other half-brothers he never knew.

They are Franz (Søren Malling), Gregor (Nikolaj Lie Kaas), and Nicolas Bro (Josef), and they are not very nice guys to say the least. When Gabriel and Elias come to the sanatorium, these socially challenged guys respond like aggressive savages defending their territory, and the blunt instruments wielded by them are another bizarre touch in the film. In addition, they frequently clash with each other, and they do look like the Three Stooges as they try to hit each other hard.

The movie keeps throwing more strange elements into the story as Gabriel and Elias come to stay in the sanatorium. We often see chickens roaming around this shabby, dilapidated place, and there are also other animals including rabbits, geese, lambs, and a stocky breeding bull named Isaac the eighth. Gabriel and Elias are told that Dr. Thanatos has stayed upstairs for a long time, but they are not allowed to see him yet, and Gabriel becomes curious about what is in a basement laboratory, where Dr. Thanatos spent lots of time for his mysterious research (I could not help but be amused when a scientific term I recently wrote into my current manuscript was mentioned at one point).

The mood becomes creepier as a hidden family secret is revealed, but the director/writer Anders Thomas Jensen, who won an Oscar for his short film “Election Night” (1999) and is also the screenplay writer of “In a Better World” (2010) and “The Salvation”, keeps his characters bouncing amidst lots of oddities and absurdities. When Gregor reveals to Elias how he satisfies his private urge during a scene reminiscent of one of the unspeakable scenes in John Waters’s notorious cult film “Pink Flamingos” (1972), you will definitely wince even if you are amused. As a guy relatively more social and sensible than Elias and his new half-brothers, Gabriel tries to provide a sort of adult supervision, but he only becomes frustrated in front of their unruly lunacy. His new half-brothers may read a sophisticated science book during their bedtime, but they still act like big babies with bad manner and volatile temper although they have managed to live together for years.

The main cast members are fully committed to their caricature roles with no compromise, and that is why the movie is funny both sharply and broadly instead of being superficially whimsical. David Dencik, a Swedish-Danish actor who has become more recognizable to us since his impressive supporting turn in Tomas Alfredson’s “Tinker Tailor Soldier Spy” (2011), anchors the film as the center of relative sanity, and Mads Mikkelsen, who has been known for his stoic turns in “The Hunt” (2012), “A Royal Affair” (2012), and recent TV series “Hannibal”, surprises us as willingly hurling himself into his wild, unhinged performance. Dencik and Mikkelsen have good manic chemistry with Nikolaj Lie Kaas, Søren Malling, and Nicolas Bro, and these five good actors are hilarious whenever their characters have a failure to communicate with each other on the screen.

As I said above, “Men & Chicken” is not for everyone, but I think you will enjoy it if you just can go along with its deranged black comedy like I did. The movie loses some of its loony energy around its last act, but this is an odd, colorful comedy film you cannot forget easily after it is over. As implied in its opening scene, life was not that good to these incorrigible guys from the very start, but they come to find how to deal with that anyway.

This entry was posted in Movies and tagged Brothers, Family. Bookmark the permalink.