South Korean film “Overman” is a rare type which I and other South Korean audiences do not come across often in these gloomy days: a genuine feel-good coming-of-age drama. Sure, there are several gray moments as its two adolescent characters come to deal more directly with each own trouble later in the story, but the movie is refreshingly bright and hopeful as honestly and touchingly observing how they help each other through their accidental relationship.

The movie begins with the recent trouble of Do-hyeon (Kim Jung-hyun), a high school gymnast who happened to get himself into a fight at his school for some reason. Thanks to his gymnastic teacher, he is only ordered to do the community service at a local public library for 40 hours, but then he begins to have a doubt about whether he really wants to pursue his athletic career. Although he and his colleagues are currently preparing for an upcoming contest, he decides to quit, but his gymnastic teacher, who turns out to be more understanding than expected, suggests that he reconsider his decision for a while.

Do-hyeon has another problem at his home. His divorced mother has been suffering from Alzheimer’s disease during recent years, and he is usually the one who takes care of her. Sometimes she looks all right in her faulty mind, but then she always regresses to her old acting career in the past, and Do-hyeon has no choice but to be her ‘manager’ because she cannot recognize her own son in that frustrating state of oblivion. 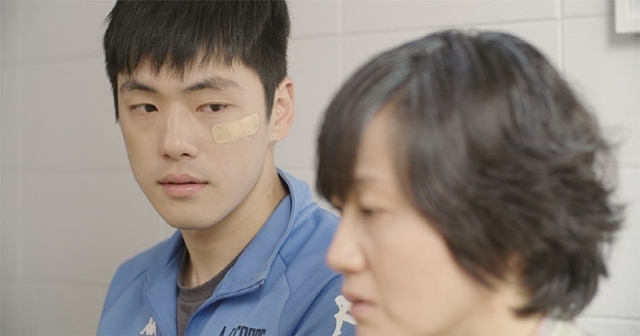 While working as a temporary assistant at the library, Do-hyeon notices a girl around his age, whom he previously came across at a hospital when he took his mother there for medical examination. He becomes more curious about her, and he finds that her name is Soo-hyeon (Kim Ko-woon) when she borrows a couple of books at the library. While Do-hyeon has never been that close to books, she has read lots of books according to her library record – and she wants to read them again.

Of course, this is a typical case of Meet Cute, so we are not so surprised to see Do-hyeon and Soo-hyeon slowly attracted to each other as time goes by. When Do-hyeon actively approaches to Soo-hyeon at a nearby cafeteria, she does not welcome him much, but she begins to be charmed by his jolly spirit, so she lets him into her space. She recommends him to read “Don Quixote”, which tickled me a lot during my first high school year. She also shows him around a local university library, which took me back to my many soothing days at the KAIST library.

Yes, as some of you probably know, I have been a hardcore bookworm since my elementary school years, and I was delighted by those frequent sights of books and bookshelves in the film while also noticing many small authentic details on the screen. At one point, my eyes quickly recognized an old Korean pirate version of Stephen King’s “Cujo”, and I could not help but wonder how the production crew managed to find that cheap book, which was published more than 20 years ago as far as I can remember.

One of the prominent books in the film is Friedrich Nietzsche’s “Thus Spoke Zarathustra: A Book for All and None”, one of whose key themes inspired the very title of the movie. When the concept of Übermensch, or Overman in English, is explained to Do-hyeon by Soo-hyeon, you can sense a real idea being conveyed from one to the other during that scene, even if you have not read Nietzsche’s book (Full disclosure: neither have I, regrettably). They interact with each other more while surrounded by books, and it is poignant to watch how they come to find each own way to overcome personal pains as becoming closer to each other. Taking the first step out of her shell, Soo-hyeon reveals to Do-hyeon a secret which she has not told to anyone, and Do-hyeon comes to accept the irreversible process of his mother’s illness, especially after one heart-wrenching moment.

The director/writer Seo Eun-young draws engaging performances from her two lead performers. Kim Jung-hyun is instantly likable in his ebullient performance, and he looks believable whenever he is required to do physical acting as an athlete character. With her unadorned expressive face, Kim Ko-woon conveys well her character’s unspoken feelings and thoughts, and she and her co-star feel natural in their effortless interactions on the screen.

I also like the way how the movie thoughtfully handles other characters. There is a brief scene where Do-hyeon visits his painter father who is living with his new wife, and this scene turns out to be surprisingly subtle and tactful as showing us both affection and awkwardness between Do-hyeon and his father. When Do-hyeon’s aunt makes a hard decision on her sister, we can see that she still cares about her sister as before. Although the movie does not go that deep into the exact circumstance between Soo-hyeon and her mother, her mother is really worrying about her daughter even though they do not say much. Do-hyeon’s two close team members and a library employee look like mere comic relief at first, but they are depicted with more depth along the story, and we get an unexpected moment of revelation when Do-hyeon is confronted by one of them.

While its finale feels like an overextended epilogue, this does not slow down the plucky spirit of “Overman”, and its last shot feels just right with what has been built up throughout the film. Life is indeed hard and difficult, but they are ready to move forward as fully embracing life – and we come to cheer for them with smile.