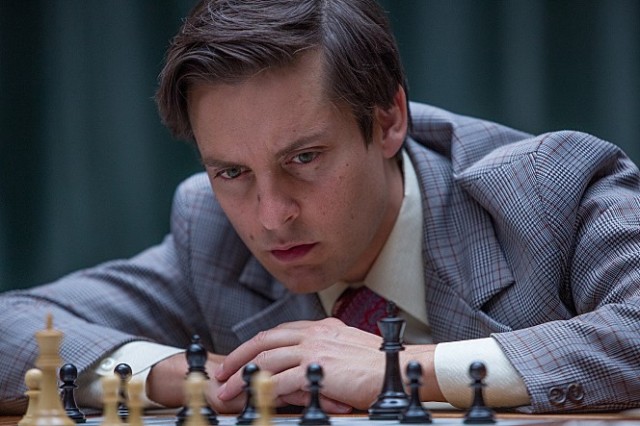 The life of Bobby Fischer was one of those typical examples of how genius can be both blessing and curse. While being one of the most brilliant chess players during the 20th history, Fischer was also a deeply troubled man who was eventually tumbled into the downward spiral of mental illness and conspiracy theory during his later years, and some of you have probably heard about his reclusive lifestyle and many loony behaviors which added more infamy to his legendary position till his lonely death in 2008.

He was not a pleasant man, and Edward Zwick’s “Pawn Sacrifice” does not hide that at all, but it sadly does not delve deep into Fischer’s mind enough. While following Fischer’s single-minded pursuit of being the No. 1 in the world, the movie merely skims over the best and worst moments of Fischer’s life, and it ultimately fails to engage us despite its interesting historical backdrop surrounding his greatest triumph.

During the early scenes depicting Fischer’s early life in New York during the 1950s, the movie attempts to explain the origin of Fischer’s lifelong paranoia. Because his Russian immigrant mother Regina (Robin Weigert) openly shows her left-wing political belief along with her friends, his home is constantly watched by federal government agents, and young Fischer, played by Aiden Lovekamp, sees some suspicious car parked outside at one point.

As he shows more interest and talent in chess, Regina later takes her son to a chess master named Carmine Nigro (Conrad Pla), and Nigro instantly sees Fischer’s exceptional talent although he beats Fischer during their first game. After being taught by Nigro for several years, Fischer, played by Seamus Davey-Fitzpatrick at this point, quickly roses to prominence as a new exciting wunderkind in the town, and he becomes more obsessed with chess while more being distant to his family than before. After he angrily complains to his mother that he cannot concentrate on chess because of her busy private life, Regina moves alone to LA, and he is fine with that.

Around the time when he is ready go outside US to confront those famous chess players from the Soviet Union, Fischer, played by Tobey Maguire from this point, soon feels exasperated because of how he seems to be strategically blocked by the Soviet players at the World Chess Championship Tournament. He storms out of the ongoing game just because he thinks the Soviet players do not play fair, and he begins to show more of erratic behaviors as he becomes more determined to get a chance to defeat the Soviet players including Boris Spassky (Liev Schreiber), the current world chess champion.

With his boyish look and offbeat persona, Maguire, who also produced the film, is well-cast, and he puts decent efforts into his performance during many scenes showing Fischer’s dark, disturbing sides, but he is unfortunately hampered by the weak screenplay by Steven Knight, which is based on the story written by Knight, Stephen J. Rivele, and Christopher Wilkinson. While we are served with Fischer’s odd behaviors mixed with his genius and arrogance again and again, Fischer remains as a distant and unlikable one-note figure without any interest to hold our interest, and, to make matters worse, the screenplay does not provide much insight on what makes him tick.

The movie has a few crucial supporting characters revolving around Fischer, but they are mostly underdeveloped or inconsistent, and the talented supporting actors in the film do as much as they can do with their thankless job. Michael Stuhlbarg, who was more engaging in “Steve Jobs” (2015) and “Trumbo” (2015), is a shady lawyer willing to indulge Fischer for making a great public moment for American people as well as their government, and his character mainly functions as a reminder of how Fischer’s ultimate goal was also important to his country during that time when the Cold War was being played between US and the Soviet Union in many fields including chess. Peter Sarsgaard is a priest who understands Fischer’s growing obsession to some degrees as a fellow chess player, and he has some good moments when his character shows concerns on Fischer’s increasingly unhinged state of mind.

As Fischer’s main opponent, Liev Schreiber is a calm counterpoint to Maguire’s ticking intensity, and he is effective when his character is baffled by his opponent’s strange demeanors and tries to see what his opponent’s next move is. When Fischer and Spassky finally have a match in Reykjavík, Iceland in 1972, Fischer demands that they should play in a small, quiet room instead on the auditorium stage just because he does not want to be distracted by any noise. Spassky comes to accept this weird request, but then he makes his own odd move later. Schreiber ably handles that moment without any slightest hint, and we are never sure about the intention behind his character’s action.

In case of the chess play scenes in the film, they feel flat and unengaging, and I doubt whether it will help even if you know how to place chess unlike me. We often see chess pieces being moved here or there on the board, but there is not any sense of strategy being executed on the screen, and the climax sequence is clichéd to the bone while eventually followed by the droning epilogue chronicling Fischer’s later years full of misery and madness.

The disappointing failure of “Pawn Sacrifice” reminds me of Steve Zaillian’s “Searching for Bobby Fischer” (1993), which is also based on the real-life story of a young chess genius. That film did a better job of presenting chess and human drama, and I recently found that it is still an intelligent and entertaining drama coupled with real thought-provoking ideas on humanity and genius. “Pawn Sacrifice” may admire Fischer’s genius, but it has almost nothing to tell about whatever humanity he had, and I think you will have a better time with the aforementioned film.