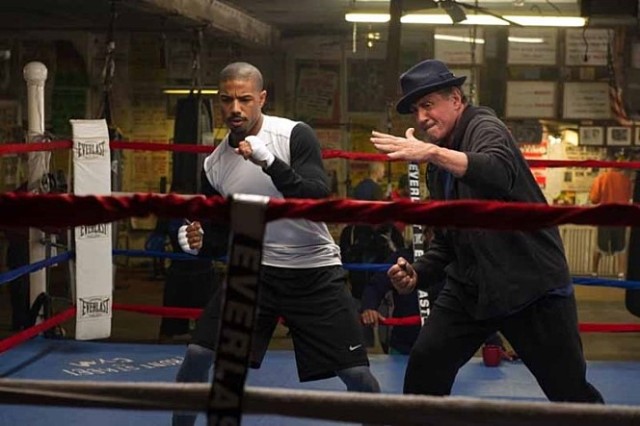 “Creed” is an underdog movie true to the dogged spirit of its old senior in many ways. Faithfully following its senior’s footsteps with some bittersweet sense of nostalgia, the movie also brings a considerable amount of fresh energy into the franchise which is going to be 40 years old in this year, and it is unexpectedly vigorous and surprisingly poignant in its pulsating mix of old and new things. It is indeed predictable and conventional in its familiar genre formula, but the movie did its job far better than I expected, and it definitely deserves its own place right under its senior as a well-made sports drama packed with lots of vigor and heart.

During the prologue scene set in 1998, we are introduced to a young boy named Adonis “Donnie” Johnson (Alex Henderson), an illegitimate son of Apollo Creed. As many of you know, Creed was Rocky Balboa’s opponent in “Rocky” (1976) and “Rocky II” (1982), but then he eventually became Balboa’s close friend in “Rokcy III” (1982). Donnie was born shortly after his father died during his last match in “Rocky IV” (1985), and he did not know about his legendary father until Apollo’s widow Mary Anne Creed (Phylicia Rashad) visits him when he is serving his time in a youth detention center.

17 years later, Donnie, who is played by Michael B. Jordan from this point, is now working in some financial company in LA, but, not so surprisingly, he has been aspiring after his own boxing career despite his stepmother’s objection. After going through several matches in Mexico, he wants to go up higher with better training, but no professional boxing trainer in LA dares to displease Mary Anne, who still exerts considerable influence as reflected by her big, luxurious mansion where she and her stepson have lived. Phylicia Rashad has a nice understated scene when her character comes to face a difficult moment she has probably feared for years; she cannot approve of her stepson’s decision on his own life, but she has no choice but to respect his choice as his caring mother, while quietly worrying about what will possibly happen to him. 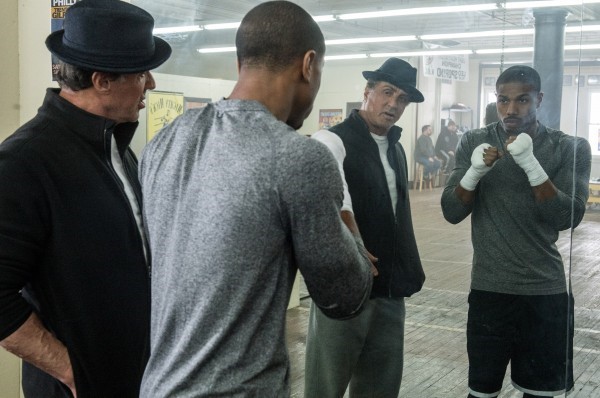 Donnie moves to Philadelphia, and then he approaches to, yes, Rocky Balboa (Sylvester Stallone), who has been humbly going through his twilight years since his last match in “Rocky Balboa” (2006), which was regarded as the send-off chapter of the franchise before “Creed” came. Although he is glad to meet his old friend’s son, Rocky is reluctant to coach Donnie, but then he changes his mind later, so we are served with their training scenes around good old neighborhoods of Philadelphia, which do not look that changed much compared to what we previously saw from “Rocky Balboa”.

While these training scenes feel routine at first, the director/co-writer Ryan Coogler, who previously made an impressive debut with “Fruitvale Station” (2013), make them look vivid and authentic under naturalistic mood, and the movie palpitates along with these scenes which function as the solid dramatic ground for the relationship between Donnie and Rocky. As they spend more time with each other through rigorous training sessions including the one involved with chickens (don’t worry, they are not pummeled like that beef in “Rocky”), Donnie and Rocky become close to each other like father and son, and Jordan and his older co-star click well with each other especially when there comes a sudden news which will test the bond between their characters.

Sylvester Stallone, who may be a sentimental favorite in the current Oscar race for his heartfelt performance here in this film, surely knows and understands well his character, with whom he has always been associated since he rose to his stardom through “Rocky”. Like Rocky did during the long history of the franchise, Stallone went through a fair share of ups and downs as managing to prevail throughout his long career, and the movie has a number of genuine emotional moments generated from the undeniable resonance between Stallone and his character. While he sees another possibility in his remaining life through his friend’s son, Rocky is also constantly aware of how close his life is coming to the end, and one quiet but harrowing scene unfolded at a local cemetery shows us how much he feels lonely as sensing more of his mortality everyday (“Time takes everybody out; time’s undefeated.”).

Jordan, a promising young actor who has kept steadily advancing since his breakthrough turn in “Frutivale Station”, remains as the center of the film in his strong unadorned performance which is alternatively intense and sincere. While physically convincing on the screen, Jordan is engaging to watch as a good-natured lad trying hard for an opportunity to prove himself outside his dead father’s big legacy, and he also has a good chemistry with Tessa Thompson, who plays a girl with whom Donnie happens to be romantically involved by chance. Like Donnie, Thompson’s character has her own aspiration she will follow to the end in spite of several obstacles including her deteriorating hearing ability, and the screenplay by Coogler and his co-writer Aaron Covington thoughtfully handles the development of this intimate relationship with sensitivity and intelligence.

The boxing match scenes in the film are as good as you can expect, and I especially admire one dynamic long-take sequence which is flawlessly executed from the beginning to the end as the cinematographer Maryse Alberti’s handheld camera fluidly moves around here and there in the end. In case of the expected climax sequence featuring a big match between Donnie and an aggressive British lightweight champion played by Tony Bellew, it is gripping and exciting even though we can clearly see its eventual end from the distance even before the bell rings for the first round, and I appreciated that the movie gives a little understanding to Donnie’s opponent, who has his own personal stake in their match.

To be frank with you, “Creed” does not break any new ground in its genre, but it successfully accomplishes its main goals with lots of respect to its senior. While giving another chance to one of the most beloved American movie heroes, it touches upon our fond memory of the franchise through many recognizable things including Bill Conti’s triumphant theme and that certain famous spot in front of the Philadelphia Museum of Art, and it also shows its own potentials through its new hero who is as interesting as his old mentor. I heard that there will probably be a sequel to follow, and I do not expect that much about what will come next, but I do not deny that the movie itself is quite a surprise to say the least. This is indeed the best film in the franchise since “Rocky”.

This entry was posted in Movies and tagged Boxing, Romance, Sports. Bookmark the permalink.