In a drab urban neighborhood where everyone looks lonely and isolated, “Macadam Stories” unfolds three different odd stories in parallel. While sharing the common tone and background with each other, these comic tales rarely intersect with each other, and that aspect further emphasizes the sense of loneliness and desperation around its main characters as it often looks like they are the only people in their gray monotonous world.

The opening scene is incidentally the most crowded one in the movie. In one shabby apartment building in the serious need of elevator repair, most of its residents agree during their meeting that they should pay together for the repair, but there is the sole voice of dissent among them. Sterkowitz (Gustave Kervern), a sloppy, passive middle-aged bachelor guy who lives alone at his home on the second floor, does not understand why he should give money for the repair fund even though he does not use the elevator, and his rather narrow-minded view naturally exasperate others at the meeting.

Anyway, his neighbors eventually decide that Sterkowitz will not be allowed to use the elevator for not contributing to the repair fund, and he sees no problem with that, but then, what do you know, he soon finds himself in the need of that elevator in question. After getting himself injured due to one silly incident involved with his new exercise machine, he will have to be stuck in his wheelchair for a while, so now he definitely needs the elevator more than ever. 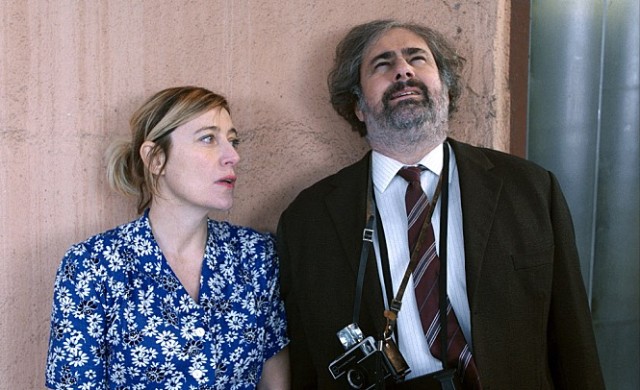 For dealing with his difficult situation, Sterkowitz comes to devise a way to use the elevator without coming across his neighbors. He notices a considerable time gap during night, so he starts to sneak out at night with his wheelchair, and that is how he happens to encounter a weary nighttime hospital employee played by Valeria Bruni Tedeschi. Probably inspired by a movie he previously watched on TV, he lies about himself during their first conversation, and he keeps going along with that deception as he continues to meet her during his routine night hours. They approach to each other bit by bit, but our sad sack guy is clumsy as usual – and she looks weary and depressed as before.

Meanwhile, we meet Charly (Jules Benchetrit, who is the son of the director/co-writer Samuel Benchetrit), a teenager resident who has been accustomed to the absence of his parents at their home. On one day, he notices that a middle-aged woman moves into the opposite apartment, and he begins to be curious about his new neighbor probably because she is played by none other than Isabelle Huppert, a fascinating French actress who has seldom been boring to watch on the screen.

Jeanne Meyer, Huppert’s character in the movie, turns out to be an aging actress behind her prime, and one of Huppert’s previous films, “The Lacemaker” (1977), is cleverly used at one point when Jeanne shows her old film to Charly. While Jeanne feels confused and bitter about how things have gone downhill for her, Charly is willing to help her besides taking care of a door lock problem, and she comes to discern a new possibility in her career as spending more time with him. Huppert and her young co-star are believable especially when Charly and Jeanne are making an audition tape for her, and the awkward comic tension around their characters is conveyed well to us as they struggle to find the right tone for the tape.

The third story in the film is probably the most whimsical one in the bunch. Because of some accident which is neither told nor shown to us, an escape capsule containing NASA astronaut John McKenzie (Michael Pitt) is fallen onto the top of the apartment building. While NASA bureaucrats try to take care of this outrageous situation without any serious public embarrassment (I am sure that the movie will not be NASA’s favorite film at any chance) John has no choice but to stay at an apartment which belongs to an old Algerian lady named Madame Hamida (Tassadit Mandi).

Although there is a language barrier between them from the beginning, John begins to enjoy and appreciate the hospitality of this sweet old lady who has been living alone since her son was sent to prison. As he becomes a sort of surrogate son for her, John feels more comfortable than before although he is going to be picked up by his people once his current messy situation is over. The movie has a small fun with John and Madame Hamida’s rudimentary communications over the language barrier, and we get a humorous scene when they talk over an American TV soap drama they are watching together.

“Macadam Story”, which was released as “Asphalte” in France, is partially based on the stories from Benchetrit’s autobiographical short story collection “Les Chroniques de l’Asphalte”. As bundling its stories together, the dry, melancholic atmosphere in the film is maintained well along with nostalgic cultural details evoking the 1980s, and Benchetrit also accentuates the stuffy environment surrounding his characters through the use of screen ratio of 1.33:1.

The influences from Jacques Tati, Jim Jarmusch, and Roy Andersson have been mentioned since it was shown at the Cannes Film Festival early in last year, but “Macadam Stories” looks less impressive compared to Andersson’s recent film “A Pigeon Sat on a Branch Reflecting on Existence” (2014), another deadpan comedy which also deals with melancholic human loneliness encompassed inside dispirited urban world. While I laughed a lot while watching that hilarious film, I was just mildly amused in this case, and that was all I experienced.

This entry was posted in Movies and tagged Apartment Building, Comedy. Bookmark the permalink.