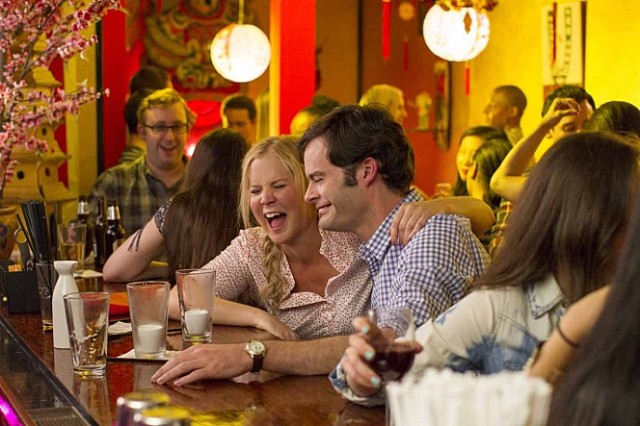 I heard about Amy Schumer for the first time through an online article on her TV show “Inside Amy Schumer”. At that time, she was merely another new comedy actress to notice, but I have kept hearing about her since then. Around the time when Judd Apatow’s “Trainwreck” was released in US during this summer, everyone talked more about Schumer, and I am now confirmed that the movie is indeed a big moment for this lively actress who is never afraid to go wild for laughs.

Schumer, who wrote the screenplay with Apatow, plays Amy Townsend, a young New York City journalist who has been leading a casual lifestyle free from any possibility of serious romantic relationship. When she was very young, her unfaithful father Gordon (Colin Quinn) gave Amy and her younger sister Kim an unforgettable (and hilarious) explanation about why he left his wife, and she has adhered well to her father’s lesson (“Monogamy isn’t realistic.”). She has went through many men (and a few women) for many years, and she always makes it sure that she does not go any further than one-night stand, though she sometimes wakes up on someone’s bed in next morning due to her frequent heavy drinking.

She has currently been in a relationship with Steven (John Cena), but their relationship does not advance beyond sex either, and he is more or less than a standby for her active sex life. Cena, who has been known well for his professional wrestling career, is appropriately cast as a muscular knucklehead, and he willingly hurls his bulky body into an uproarious scene where Steve struggles to say something dirty and titillating while going through another strenuous bedroom activity with Amy.

Meanwhile, Amy is assigned to a profile article on Dr. Aaron Conners (Bill Hader), a prominent sports medical doctor in Manhattan. While their first meeting at his workplace is a bit strained as your average Meet Cute scene, their next meeting is followed by the dinner at a restaurant, and then they spend a night at Aaron’s place for… you know.

When Aaron calls her on the next day, Amy is flabbergasted, but she meets him again anyway, and she finds herself going further than expected as spending more time with Aaron. He may look plainer than many men in her life, but he is a kind, decent guy who is also fun to hang around with, and we get a naughty homage to that immortal shot in “Manhattan” (1979) during the obligatory montage sequence of their date time.

As their relationship becomes deeper bit by bit, Amy begins to wonder whether she can really move onto the next stage, and she discusses a lot with Kim (Brie Larson), who is expecting a baby with her husband Tom (Mike Birbiglia). In case of Aaron, he has none other than LeBron James, and James is surprisingly humorous during the scenes where he gives sincere supports and advices to his best friend.

The movie takes expected narrative turns as following the familiar conventions of romantic comedy films, and I think it is a little overlong while having some pace problem around its second half. Like other romantic comedy films, it becomes more predictable during the third act where things become more serious for its characters, and I think its mandatory finale could be trimmed a bit without much problem. 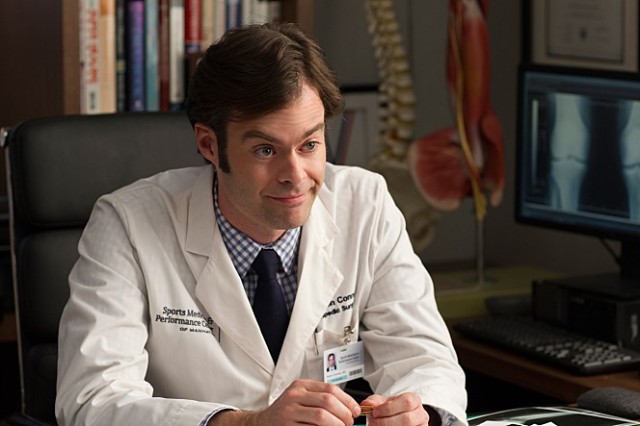 Nevertheless, the movie is filled with a bunch of colorful characters who constantly generate small and big laughs along the story. Colin Quinn is cranky but somehow lovable as Amy’s father, and Norman Lloyd, a veteran actor who had his 101st birthday in last month, holds his own small place in the background as Gordon’s fellow resident in their assisted living facility. In her barely recognizable appearance which makes her look like Sarah Jessica Parker’s British cousin, Tilda Swinton steals every scene of hers as Amy’s pompous boss, and Jon Glaser, Vanessa Bayer, Randall Park, and Ezra Miller also get each own comic moments as the other employees at Amy’s workplace. Besides James, there are other well-known celebrities and sports players appearing as themselves here and there throughout the film, and, though not all of them work well in my opinion, their appearances do provide extra amusement for us.

And Amy Schumer is charming as a flawed but good-hearted heroine who is sometimes a little too blunt about her thoughts and feelings. Amy makes inappropriate comments from time to time, but Schumer is smart and witty enough to make them funny and honest with some acerbic points. During the scene where her character gives a big speech in front of others, she is effortless as gliding around humor and sincerity, and she and Apatow let that moment punctuated by a good punch line while never breaking its bittersweet overall mood. She also has a nice chemistry with her co-star Bill Hader, and Hader’s low-key performance effectively complements Schumer’s straightforward persona.

Since “The 40-year-old Virgin” (2005), Judd Apatow has directed several comedies which are sweet, smart, and funny in spite of their raunchy aspects, and some of them were the best career moments of the performers who worked with him. “The 40-year-old Virgin” introduced many comedy actors to me besides Steve Carell, and I have liked Seth Rogen since I watched that film and “Knocked Up” (2007). In case of “Funny People” (2009), revisiting this underrated comedy film will probably make me despair more over why Adam Sandler has kept wasting his time and talent more than ever during recent years. While “Trainwreck” is not as funny as them, Apatow and Schumer keep things floated despite its weak points, and it will be probably worthwhile to be remembered for Schumer’s first major success on the screen.

This entry was posted in Movies and tagged Comedy, Doctor, Father and daughter, Journalist, Romance, Sports Player. Bookmark the permalink.