Marlon Brando lived a curious life to amuse and baffle us. While this legendary Hollywood actor gave us a number of great performances to behold and admire, he often seemed to be drifted away with no particular interest in acting, and that resulted in some embarrassing moments to tarnish his illustrious career. He has also been remembered for many episodes about his erratic behaviors, and they surely added another layer of intrigue (and notoriety) to an elusive talented actor who was extremely private about himself.

Mainly consisting of the private audio recordings left by Brando himself, Stevan Riley’s documentary “Listen to Me Marlon” gives us a sensitive and compelling portrayal of Brando’s life and career. As its uncanny narrator, Brando reveals himself to us far more than before here in this documentary, and we come to pay attention to his candid musings on himself at the various points of his bumpy life story.

With the opening scene featuring Brando’s 3D digital face which was actually made with his cooperation during the 1980s, the documentary effectively sets its tone as we listen to Brando’s recognizable voice. When he talks about his early years, he tells us how unhappy his childhood years in Nebraska was due to his problematic parents, and we comes to sense his old deep resentment toward his father, who was not a very good father at all and did not regard highly of his son even after he became a famous movie actor. 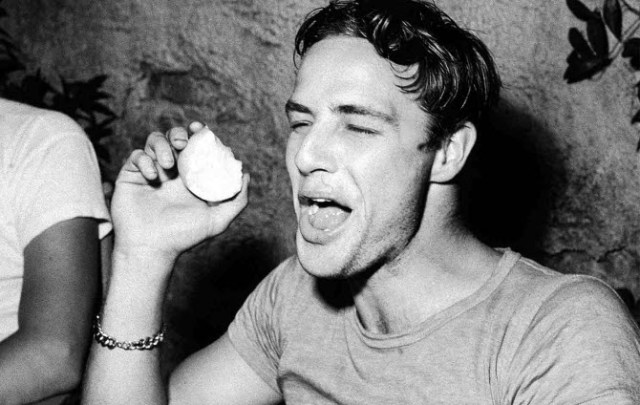 After finding his interest in acting, young Brando went to New York, and he was taught by Stellar Adler, who was one of the early method acting teachers inspired by the Stanislavski System. He fondly remembers how much he learned from his encouraging mentor during his studying years, and he explains how he applied his method acting technique to his first film “The Men” (1950), directed by Fred Zinnemann and produced by Stanley Kramer. To prepare for his injured war veteran character struggling through rehabilitation processes, he spent a considerable amount of time at an army hospital, and he consequently made a solid debut even though the movie was not a hit.

With his very next film, Elia Kazan’s “A Streetcar Named Desire” (1951), Brando galvanized Hollywood with his raw, electrifying method performance, and everything was changed both for Hollywood and Brando as a result. Hollywood began to be shifted toward more realism in acting, and Brando, who got his first Oscar nomination for his ground-breaking achievement (he lost to Humphrey Bogart in “The African Queen” (1951), by the way), quickly became a new Hollywood star to watch. His subsequent Oscar-nominated performances in “Viva Zapata!” (1952) and “Julius Caesar” (1953) further solidified his stardom, and then he finally won an Oscar for his another great performance in “On the Waterfront” (1954).

However, as he went higher with more fame and success, he also began to gain notoriety as a difficult actor to work with, and there eventually came a career downturn around the 1960s. In addition to being a major flop, “Mutiny on the Bounty” (1962) considerably damaged his reputation as he was blamed for its troublesome production and eventual box office failure, though he was at least glad to find his own private place to live during the shooting in Tahiti. While distancing himself more from Hollywood after this very unpleasant experience, he subsequently found himself wandering into several bad films, and we see one very awful scene from “Candy” (1968), which looks like his version of “The Love Guru” (2008).

He also went through a fair share of personal troubles. His divorce with his first wife Anna Kashfi in 1959 was followed by their bitter custody battle over their young son Christian, and he married and divorced twice after that. As some of you know, Christian later committed that infamous killing at his father’s residence in the Hollywood Hills, and it indirectly resulted in another painful incident in Brando’s life several years later.

While frankly admitting that he made really bad choices in his life and career, Brando also shows his more thoughtful sides as talking about his personal belief. He openly participated in the Civil Rights Movement during the 1960s, and he showed considerable interest in the American Indian Movements – and that led to that memorable moment at the 1973 Academy Awards ceremony when he won his second Oscar for “The Godfather” (1972).

With his superb comeback performances in “The Godfather” and “Last Tango in Paris” (1972), Brando proved that he lost none of his talent at all. He details on how he was initially reluctant but eventually went very deep into his iconic character in “The Godfather”, and then he confides to us about how much he felt drained and exhausted as hurling himself into “Last Tango in Paris”, where he had to push method acting techniques to the extreme for his emotionally naked performance in that great film. Although he was sometimes merely content with taking paycheck roles at during his later years, Brando was still a consummate actor dedicated to his profession none the less, and there were indeed a few shining points including “Apocalypse Now” (1979), “A Dry White Season” (1989), “The Freshman” (1990), and “The Score” (2001), which was his last film.

“Listen to Me Marlon” is a captivating tribute to its subject, and the director Stevan Riley did a superlative job of assembling his materials together into a fluid, cohesive narrative to engage us. The result is both insightful and entertaining as honestly presenting Brando as not only a fascinating actor but also a complex human being, and it will give you some valuable understanding on a man behind some of the greatest movie performances of the 20th Century.

This entry was posted in Movies and tagged Actor, Documentary, Real-life figure. Bookmark the permalink.