Mainly because of Robin Williams’s death in last year, “Boulevard” comes to us as a bittersweet experience. Although this somber melancholic character drama will be likely remembered as a minor work in his long career, it is nice to see how subtle and delicate this great actor could be, and then we are reminded again that he did not often get such a good chance like this during his last years.

In “Boulevard”, Williams plays Nolan Mack, a middle-aged man who is about to enter a crucial point of his comfortable but monotonous life. He has worked at a local bank for more than 25 years with commendable work record and considerable reputation, but he does not look that happy at his work although he always responds to his boss and customers with gentle, courteous smile. When he is notified by his boss that he may be promoted to the position of a branch manager in other area, he is not sure about whether he wants the promotion, and he keeps going through his daily routines as usual.

His wife Joy (Kathy Baker) is another stable longstanding element in his life, but there is always the distance between them in their seemingly cozy domestic life. While they do not have any child between them, they sleep separately in each own private place, and that makes them look more like longtime roommates rather than a couple. Even though both of them are well aware of how hollow their relationship is, they have been accustomed to each other so much that it is nearly impossible for them to imagine the life without each other. They maintain their banal appearance in front of others around them, and they sometimes have a brief talk before sleep as if they wanted to remind each other that their relationship still works for both.

We soon learn about the secret behind their relationship. During one night, Nolan goes to a hospital after being notified of his aging father’s sudden stroke. As returning from the hospital, he makes an impulsive decision when his car happens to be on a boulevard populated by prostitutes and hustlers during late night. He spots a young hustler named Leo (Roberto Aguire), and then they go together to a nearby motel. While Leo is willing to do whatever Nolan wants as long as he gets paid, Nolan simply prefers intimacy to sex, which is still an area he is not willing to enter.

As Nolan keeps meeting Leo, Nolan’s stable life is gradually disrupted. He is late for his work because he was waiting for Leo’s call during the last night, and then there come more troubles as he gets involved more in Leo’s life. While he manages to hide his affair from others, Joy is not oblivious to her husband’s small changes, but she chooses to not ask too much about how he spends late hours outside, for she does not want to face the truth which can destroy whatever is remained in their relationship.

As Nolan struggles to get out of his shell, the screenplay by Douglas Soesbe tentatively follows his uncertain emotional journey as taking its time to reveal what has been suppressed inside this deeply unhappy man. The low-key tone of the movie is seldom broken under the director Dito Montiel’s understated handling of mood and performances, and there are a number of subtle scenes glimmering with quiet emotions. During another private visit to his father, Nolan finally lets out what he has been hiding from others including his family since he was young, and a small gesture of Nolan’s father, who is unable to speak due to his illness, is more than enough for Nolan to see how his father feels about that. The scenes between Nolan and Leo are handled with restrained sensitivity, and Williams is convincing as his character clumsily reaches for what he begins to yearn for. As getting closer to Leo, Nolan wants to help him, but he only comes to realize that he should not expect too much from Leo, who may be touched by Nolan’s sincerity but cannot give him what he wants.

Like late Roger Ebert often said, Williams was always effective whenever he dialed down his comic persona, and that was proven well though a diverse array of performances ranging from the warm, generous psychiatrist in “Good Will Hunting” (1997) to the devious psychopathic killer in “Insomnia” (2002). In “World’s Greatest Dad” (2009), Williams played a troubled high school teacher who decides to fabricate the circumstance surrounding his obnoxious teenager son’s death for his own desperate reason, and you may see a parallel between that character and Nolan; both thought that they could live with their own lie, but it becomes more and more apparent that they cannot fool themselves even if they can deceive others. Steadily holding his character’s calm façade, Williams’ nuanced performance ably carries the film, and his quiet face gradually exudes the deep sadness accumulated inside his character.

Williams is also surrounded by good supporting actors. While Leo is more or less than a catalyst for change in the story, Roberto Aguire is well-cast in his role, and Bob Odenkirk, who has been more recognizable thanks to his excellent works in the recent TV series including “Breaking Bad” and “Fargo”, brings some lightweight mood to the film as Nolan’s old friend who becomes serious about his latest romance. As a woman who is as unhappy as her husband but would rather stay with unhappiness, Kathy Baker has a nice scene with Williams later in the story, and we can clearly see how their characters have managed to live together under the same roof for many years.

While meandering at times, but “Boulevard” works thanks to Robin Williams’ performance. Yes, it is almost a cliche to say that nothing is too late as long as we are alive, but that familiar truth feels sincere and touching as we watch Williams’ face during the last scene of the film. Goodbye, Mr. Williams, it has been a pleasure to watch your good works including this one. 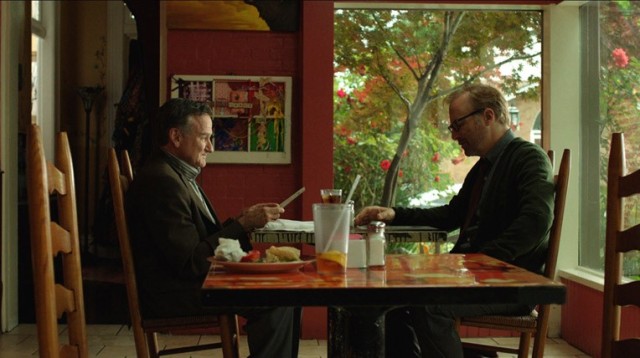 This entry was posted in Movies and tagged Homosexuality, Husband and Wife, Hustler. Bookmark the permalink.