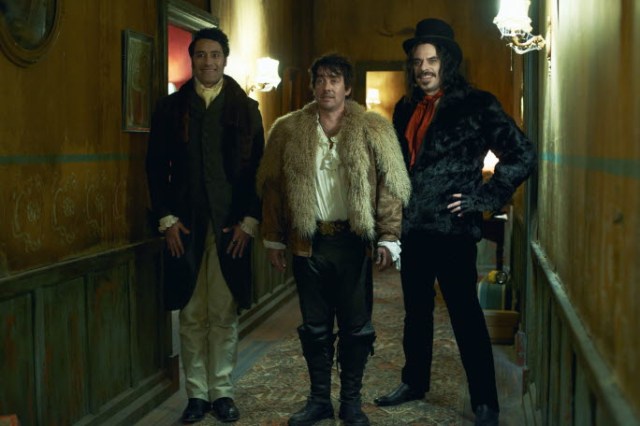 “What We Do in the Shadows” is one of the most hilarious comedy films I saw during recent months. It is indeed an one-joke comedy as I guessed from its trailer, but this is a smart, funny horror comedy which cleverly finds many ways to have a fun with its outrageous comic premise as well as many horror genre conventions to be lampooned, and I must confess that I laughed a lot to myself throughout its short running time as enjoying its witty, uproarious jokes on its goofy vampires and their unenviable night lifestyle.

Through its mokumentary approach, we are introduced to four vampires who have been living together for many years in an old big house somewhere in the suburban area of Wellington, New Zealand: Viago (Taika Waititi), Vladislav (Jemaine Clement), Deacon (Jonathan Brugh), and Petyr (Ben Fransham). While Viago, Vladsislve, and Deacon are more than 100 years old, Petry, the oldest one who sleeps inside his stone coffin in the basement, looks like having lived for several thousand years at least, and his rather inhuman appearance makes me wonder whether he is a relative of Count Orlok in great vampire film “Nosferatu” (1922).

While these vampires have been accustomed to sucking the blood of any human being targeted by them, they agreed to make an exception on some documentary crew who made a contact with them in advance, so their story is presented through the cameras of this documentary crew, who are almost never shown on the screen (we are told at the beginning that the crew took a couple of safety measures as required during their risky shooting). In front of the camera, Viago, Vladislav, and Deacon talk about their long past with casual frankness during their individual interview scenes; while Deacon, aged 183, recounts his unfortunate encounter with a vampire during his last day as a human being, Vladislav, aged 862, reminisces the savage past during those old bloody years of his, and Viago, aged 317, tells us his personal story about how he settled in New Zealand around the 20th century. 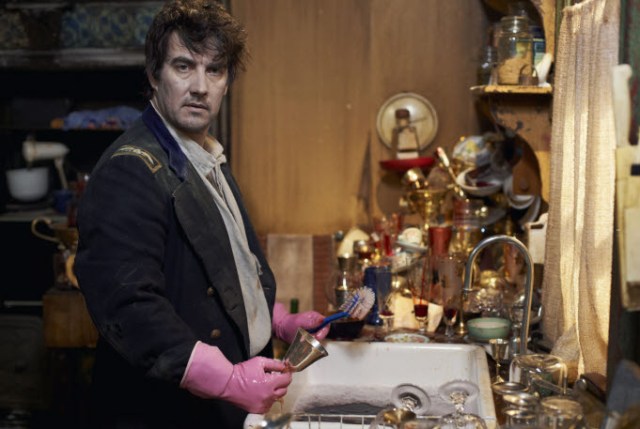 As we watch them through the documentary crew’s cameras, they look pretty much like your average flatmates who try to live well along with each other, and they also have several common domestic matters including house cleaning or a messy (and bloody) kitchen sink. Although they are technically dead bodies, these bloodsucking guys do have feelings inside their dead hearts, and it seems their certain body parts function pretty well despite their low body temperature.

Whenever the sun goes down, they are ready to suck the blood of their possible preys on the night streets of Wellington like other vampires in the city, but it is not always easy for them to get what they crave for, and the movie constantly tickles us with small funny moments based on those familiar genre conventions associated with vampires. While they are hopelessly out of touch with the 21th century world, our vampire trio has difficulties in getting themselves dressed (they cannot be reflected in mirror, you know), and they sometimes get prevented from entering night clubs when nobody is going to formally let them into their potential hunting grounds.

Although their bloodsucking business is not a pretty sight to say the least, the co-directors/co-writers Jemaine Clement and Taika Waititi keeps their film bouncing with a cheerful deadpan tone, and they also give likable comic performances along with their co-star Jonathan Brugh while mostly looking serious as ‘documentary subjects’. As a fastidious vampire with soft sides, Waititi is hysterical when his character tries to deal with his unspeakable nature as courteously as possible during one hilariously nasty scene, and Clement is equally funny as a grumpy vampire who has a very old score to settle with someone he called “The Beast”. As the third member of the clan, Brugh has his share of funny moments to shine, and there is an amusing moment when Deacon and Vladislav talk about why they prefer virgin’s blood even though that actually does not mean much to them.

The movie becomes more hilarious as other characters appear later. We meet Jackie (Jackie Van Beek), a human housewife who has been frustrated with her nearly thankless job of serving her master Deacon and his flatmates (Deacon promised her an eternal life, of course), and then there comes Nick (Cori Gonzalez-Macuer), who was supposed to be a meal to suck at first but eventually becomes a new flatmate. While enjoying some cool abilities gained from his transformation, Nick also gets a very hard lesson on his strict diet, and I was reminded again of why I do not want to be a vampire at all. Immortality or sunlight hazard may be something I can deal with, but it is pretty depressing to think that you only have to drink red protein shake for the rest of your endless life, isn’t it?

Anyway, thanks to Nick and Nick’s friend Stu (Stu Rutherford), Viago, Vladislav, and Deacon learn a bit about the convenience of modern technology, and Stu quickly becomes their another human associate although he does not exactly serve anyone. As a matter of fact, Nick’s fellow vampires like Stu so much that it takes some time for them to realize at one point that Stu is in a very perilous situation thanks to his close friendship with them.

There were several times I could not help but notice the contrived aspect of its setting (how can the documentary crew keep documenting everything with their cameras even when they are in a serious danger or a very unethical circumstance?), but “What We Do in the Shadows” is an unrealistic comedy based on a preposterous premise from the very beginning, and its bloody but ultimately sweet comedy has plenty of laughs to overlook its contrivances for a while. These funny vampire guys can be pretty bloodthirsty enough to suck you all, but it is their nature, isn’t it? 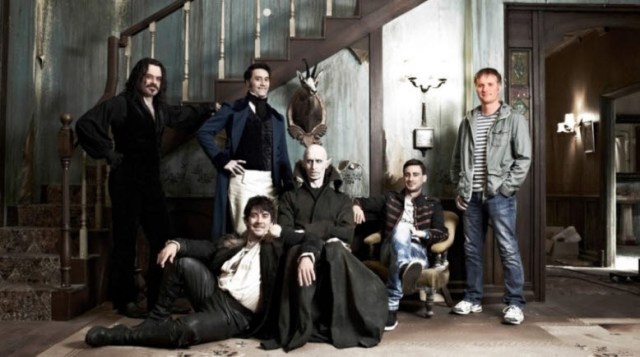 This entry was posted in Movies and tagged Comedy, Horror, Mokumentary, Vampire. Bookmark the permalink.