Focusing on one of the monumental moments during the 1960s Civil Rights Movement, “Selma” instantly takes us to that turbulent era viewed from Martin Luther King Jr. and other civil rights activists. While being a complex portrayal of its hero, the movie is also a compelling drama which illuminates on a dark, difficult period he and others had to endure before ultimately rising to the occasion, and their story reminds us of how far the American society has advanced since that point – and how much progress it still needs to make even at present.

The movie begins with Martin Luther King Jr. (David Oyelowo) preparing for the Nobel Prize ceremony with his wife Correta Scott King (Carmen Ejogo) on October 14th, 1964. His acceptance speech at the ceremony held in Oslo, Norway looks like the peak of his civil rights activity at first, but then the following scene, which is based on a shocking bombing incident in 1963, shows that it is not yet over for him and others participating in the 1960s Civil Rights Movement. There were lots of people in the Southern states who did not welcome the civil rights activity during that time, and their prejudice and hate toward African Americans and civil rights activists resulted in not only that bombing incident but also other notorious incidents of brutal violence and murder.

Although President Lyndon B. Johnson (Tom Wilkinson) and his government got the Civil Rights Act passed in the Congress in 1964, this act still could not prevent the racial discrimination in the voter registration of Southern states. As shown during an infuriating scene early in the film, local authorities could block African American citizens from voter registration by any means necessary, and Alabama governor George Wallace (Tim Roth) remained to be indifferent to many unfair cases of injustice in his state while maintaining his contemptuous disregard of the civil rights in public.

The movie gives us a dramatic account of how the Selma to Montgomery marches eventually led to the passing of the Voting Rights Act of 1965. After his fruitless private conversation with President Johnson at the White House, King becomes more determined to take a big action for voting rights, so he and his fellow civil rights activist go down to Selma, Alabama in early 1965. After perceiving that it is a suitable place to start their long protest march to Montgomery, they begin to prepare for their plan step by step, and they finally come to attempt their first march on March 7th, 1965, an infamous day which was nicknamed “Bloody Sunday” for the brutal suppression of the marchers by the local police force.

While vividly recreating the local period mood palpable with the sense of oppression on the screen, the movie never steps back from cruel, violent moments of racism, and the director Ava DuVernay gives us a number of striking moments including a memorable sequence unfolded on the Edmund Pettus Bridge during Bloody Sunday. Alternatively looking inside and outside the pandemonium on the bridge, this sequence effectively shows us how much this barbaric incident, which was one of the most painful and shameful moments in the modern American history, shocked the whole nation at that time, and it also makes a point on how it indirectly brought the best out of many good people who came to Selma for helping and supporting the march.

As Martin Luther King Jr., David Oyelowo, a British actor who initially drew my attention through his solid supporting job in “The Last King of Scotland” (2006), gives an astounding breakthrough performance which was sadly not Oscar-nominated in this year. As fully embodying his character on the screen right from his first scene, Oyelowo is simply magnetic and eloquent in his committed performance, and he also masterfully conveys King’s human sides to us when the movie closely observes the interactions between King and others close to him. When he is criticized by some of his people after he suddenly decided to step back even though everything seemed to be ready for him at that point, King defends his decision with a good strategic reason, but he is not sure about whether he will succeed or not in the end, and he comes to have moments of self-doubt as the circumstance surrounding him and other is getting more intense and volatile.

The screenplay by Paul Webb also does not overlook the strains in the relationship between King and his wife, who has gone through many things since he became a prominent civil rights activist in public. While firmly standing by her husband with the belief shared between them, Coretta confronts her husband at one point after a certain recording tape was sent to her, and Carmen Ejogo, who holds her place well besides Oyelowo, slowly and sternly reveals her character’s personal pain during this quiet but painful scene. Knowing how deeply his wife feels hurt, King has almost nothing to say while feeling guilty about the pain he foolishly caused, and Oyelowo and DuVernay add intriguing ambiguity to the end of this scene when King has to answer to his wife’s final question.

Besides Oyelowo and Ejogo, the movie is packed with various actors who fill their respective supporting roles with respect and a bit of personality. While more notable actors including Tom Wilkinson, Tim Roth, Oprah Winfrey, Cuba Gooding Jr., Martin Sheen, Dylan Baker and Common draw our attention at first, they are more or less than small parts of the cast along with other good actors including Wendel Pierce, Ruben Santiago-Hudson, Giovanni Ribisi, Alessandro Nivola, Keith Stanfield, and Andre Holland.

Since its release, “Selma” has drawn lots of controversy due to its rather negative depiction of President Johnson, who actually supported King and the 1960s Civil Rights Movement more than how he was depicted in the film. While it goes without saying that Wilkinson looks as awkward as Liev Schreiber in “The Butler” (2013), “Selma” is a fiction from the beginning, and I must point out that DuVernay and Webb simply chose a more dramatic setting to emphasize the role of King and other African American activists in the history. Like Alan Parker’s “Mississippi Burning” (1988), which heavily (or grossly in some people’s view) modifies the details of a real-life incident for creating a more vivid and electrifying version to make us feel the heated vibes of the 1960s Civil Rights Movement, their movie is intended to be more dramatically effective as a fiction rather than being historically accurate, and the result is powerful enough to be truthful to the mood and emotions generated from its real-life story.

Despite its few notable flaws including a couple of storytelling devices which feel a little too artificial at times, “Selma” remains as a superb historical drama with the right mix of nobility and humanity thanks to DuVernay’s excellent direction and Oyelowo’s magnificent lead performance. Its finale coupled with the depiction of one significant forward step in the American history is surely expected from the start, but it is movingly delivered with lots of emotional resonance to touch us none the less, and the movie comes to us a sincere and passionate tribute to King and other brave, righteous people behind it. 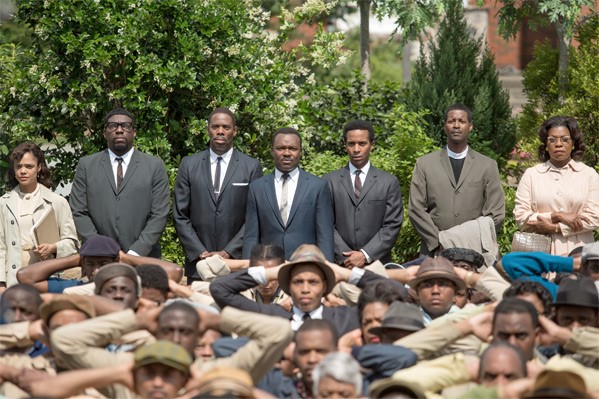