While not flinching from the dark, gloomy side of its story, “The Skeleton Twin” works as an intimate and humorous story about the rocky relationship between two estranged siblings who respectively struggle with each own personal problems. As observing their close but troubled relationship, the movie enters a familiar territory of dysfunctional family drama, but its story and characters feel sincere and genuine thanks to good writing and performance, and we come to care a lot about its two flawed main characters who still can lean on each other as before despite their problems.

When we meet Milo Dean (Bill Hader) during the opening scene, he is at the bottom of his ongoing depression. He once hoped to be a successful Hollywood actor, but he has merely worked as a restaurant waiter without getting no chance to realize his dream, and it is implied that he had a recent break-up with his gay lover. Driven by overwhelming despair and frustration, he decides to kill himself at his small apartment in LA, but, fortunately, his suicide attempt is failed, and, ironically, it incidentally saves his twin sister Maggie (Kristen Wiig), who is also on the verge of committing suicide right before she hears about the news of her brother’s suicide attempt.

Maggie instantly flies to LA to see her brother she has not seen for several years since he left their hometown in New York, and, after spending some time for recuperation at the hospital, Milo reluctantly comes back to their hometown with Maggie, who is willing to provide a resting place for her recovering brother along with her husband Lance (Luke Wilson). Lance is one of those cheerfully good-natured guys you cannot possibly hate, and he gladly takes Milo to his workplace for giving his brother-in-law some work to do while pulling himself together.

And we get to know about Maggie and Milo’s unhappy past through their interactions and occasional flashback shots. While there were happy times to remember during their childhood, they are still haunted by the memories of their dead father, and their selfish mother Judy (Joanna Gleason) does not help them much when she happens to drop by Maggie’s house. Although Judy and her children do not talk a lot about their past while they have a dinner together with Lance, Maggie’s bitter attitude shows her deep resentment toward her mother, and Gleanson’s brief but effective performance tells us everything we need to know about her character. It is no surprise that Maggie is unsure about whether she can be a good mother; while Lance is eager to be a father, she has secretly avoided pregnancy using birth control pills, and he has no idea on what she is doing behind her back.

And she also has other secrets to hide from him. During her scuba diving lesson, she finds herself attracted to her handsome instructor, and this turns out to be not the first time in her life which has been filled with many other guys besides Lance. She hates herself for that, but she just cannot help herself, and she feels more guilt along with self-hate especially when she miserably fails to abort her latest affair.

Meanwhile, Milo also finds himself in a complicated situation when he approaches to Rich (Ty Burrell), Milo’s ex-lover who was his high school teacher when they happened to get romantically involved with each other. While their relationship in the past was unethical and illegal to say the least, Milo still has some feelings toward his first lover, and he and Rich soon resume their old affair although Rich has been trying to lead a new life while hiding his homosexuality in the closet as before. Milo feels good to be with Rich again, but then he is reminded again of how hopeless their relationship is, and that makes him depressed as before. 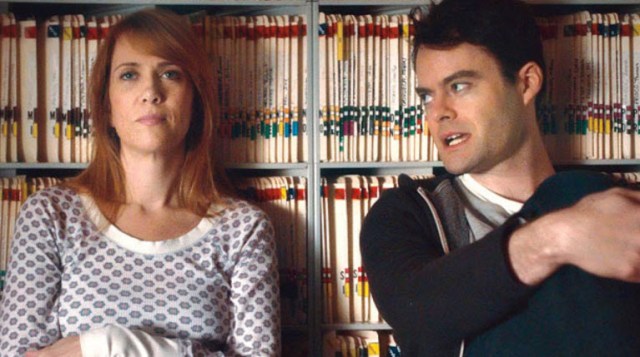 Depicting his characters’ messy personal troubles with care and understanding, the director/co-writer Craig Johnson sometimes lifts up the melancholic mood on the screen with the precious moments of warm intimacy between Milo and Maggie. Sometimes they do not get along with each other well, but they are still close to each other as brother and sister, and there is a wonderful scene when Milo tries to cheer up his sister with Starship’s lively song “Nothing’s Gonna Stop Us Now”. He may look silly at first, but her face gets slowly brightened up by his dance, and we cannot help but smile at this.

While having been mainly known for their comic roles since their early years in “Saturday Night Live”, Bill Hader and Kristen Wiig, who previously appeared together in “Adventureland” (2009), try more serious acting here in this film, and they always hit the right notes as deftly handling humor and drama in their scenes. Hader has a sad, poignant moment when Milo talks to his sister about how much he has disappointed with his life, and Wiig is very good when Maggie finally faces the inevitable point of her married life. In case of the supporting actors, Luke Wilson is amiable as a husband who may be too good for his wife, and Ty Burrell, another actor in the film who has been famous for his comic roles, gives a surprisingly understated performance as a man who is as flawed as his old lover.

Although its main subject is surely a moody one, “The Skeleton Twin” finds warmth and humor inside its story through the realistic depiction of a problematic but reliable sibling relationship, and it is supported by well the solid performances from Hader and Wiig. I think the movie arrives at the ending a little too abruptly and uncertainly, but that is just my minor complaint considering its small hopeful tone it earns in the end.

This entry was posted in Movies and tagged Family, Homosexuality, Husband and Wife, Sibling, Suicide. Bookmark the permalink.