What is the standard of good art? Or is there really such a standard like that? Mostly shying away from these interesting questions evoked by its fascinating real-life story, Tim Burton’s new film “Big Eyes” takes a rather plain, earnest approach to the story in which the art of painting and the art of deception are interestingly intertwined with each other. The result is a bit disappointing while looking quite ordinary compared to Burton’s other notable works, but it is entertaining as supported by its two good lead performances, and it works as a tale of one struggling artist who managed to retain her artistic identity despite all those years of coercion and manipulation put upon her.

When Margaret Ulbrich (Amy Adams) finally left her first husband with her young daughter in 1958, she did not probably imagine that she would soon be in the grip of another guy coming into her life. While trying to build her new life in San Francisco through her menial painting job in some furniture factory, she also tries to earn extra money through her paintings at a local public park, and that is how she comes across Walter Keane (Christoph Waltz), another painter trying to sell his paintings on the same spot. Walter is a smooth charmer who also works as a successful realtor, and it does not take much time for him to win the affection of Margaret, who eventually accepts his impromptu proposal later when she is notified that she may lose her child custody to her ex-husband.

While they do not get any success yet, everything looks fine for Margaret and Walter as Walter keeps trying to promote their respective painting careers, and then there comes a good chance after he is allowed to hang their paintings on the wall of a popular jazz club owned by Enrico Banducci (Joe Polito). While his paintings of the streets of Paris do not draw much attention, Margaret’s simple but impressive paintings of sad little girls with big, doleful pancake eyes become very popular, and Margaret and Walter get more money than they have ever imagined through selling them to the club’s visitors.

However, there is one problem. Walter lies to others that Margaret’s paintings are his works, and he keeps sticking to this small lie which becomes bigger and bigger along with the increasing popularity of Margaret’s paintings. Margaret naturally becomes angry about this, but, after persuaded by her Svengali husband that they will get more success through his name and promotion skill, she unwisely goes along with his deception – even when there is a very good chance to rectify her situation right in front of her eyes.

And that is the beginning of another misery in her life. As demanded by her husband, Margaret hides everything about her work from others including her own daughter, and she looks more like a prisoner as she works alone inside her house and Walter gets all the fame and attention outside. Besides more paintings of big-eyed girls, Walter also demands other things necessary for maintaining his false career and reputation, and Margaret belatedly realizes later that she is trapped in a virulent relationship which is probably worse than her former marriage. She becomes more angered and frustrated day by day, but, like many abused wives, she is also resigned and helpless as mired in her gloomy situation, and she continues her utterly thankless work as before.

As the popularity of her paintings keeps rising, the screenplay by Scott Alexander and Larry Kareszewski, who previously collaborated with the director Tim Burton in “Ed Wood” (1994), also focuses on the different reactions on Margaret’s paintings during that time. While the general public is enthusiastic about her paintings, Ruben (Jason Schwartzman), a snobbish gallery owner more interested in modern abstract art, observes this new popular trend with dismay, and John Canaday (Terence Stamp), a stern prominent art critic in New York, shows nothing but disgust and contempt toward the paintings which look very childish and kitsch in his opinion. 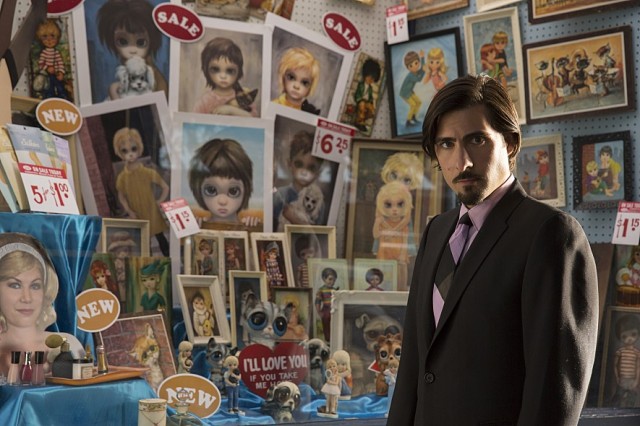 A funny thing is, although he usually cares about earning more money and fame as much as he can through snatching his wife’s works, Walter also becomes a prisoner of his own lie as much as his wife. Although this lying bastard cannot even distinguish acrylic paint from watercolor paint as shown during one funny moment, he still desires to be recognized as a first-rate artist, and there is an ironic scene in which he furiously reacts to Canaday’s ruthless piece on his wife’s latest work although he is not entitled to do that considering his ongoing deception.

While equally looking at the opposite side presented by Ruben and Canaday, “Big Eyes” does not show any direct opinion on whether Margaret’s paintings deserve to be recognized as good art, but it cares about Margaret’s long personal struggle, and Any Adams steadily holds our attention with her likable performance while her co-star Christoph Waltz, who has always been a natural scene-stealer since his Oscar-winning turn in “Iglourious Basterds” (2009), enjoys a number of juicy scenes as an impertinent fraud we love to hate and watch. Even when he is in a situation way over his head during his courtroom battle with Margaret later in the story, Walter pathetically squiggles to get out of the trouble he asked for, and we even get an absurd moment reminiscent of that bizarre courtroom scene from Orson Welles’ classic noir film “The Lady from Shanghai” (1947).

“Big Eyes” is as sincere as “Ed Wood”, but it is less colorful and memorable in comparison, and the result is not exactly the best moment for the people behind its making. Its ending feels a little too abrupt, and I still think the movie could have dug deeper into its themes, but I enjoyed its good parts including Adams’ and Waltz’s performances. Margaret Keane, who is still active in her career and also briefly appears in the film as an extra, may not be remembered as a great artist, but her works deserve to be respected as art regardless of whether they are really good or not, and the movie shows its light but sincere homage to her artistic passion. 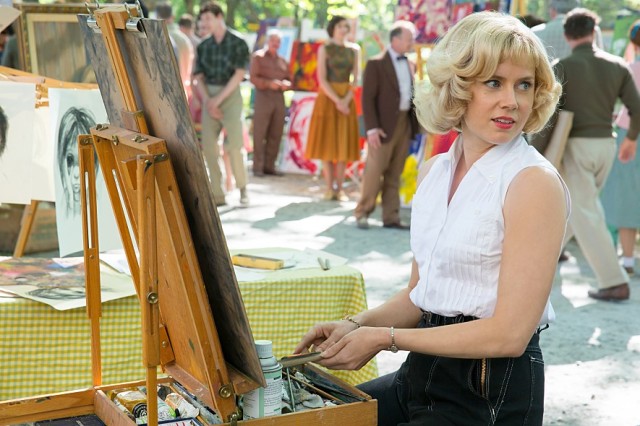