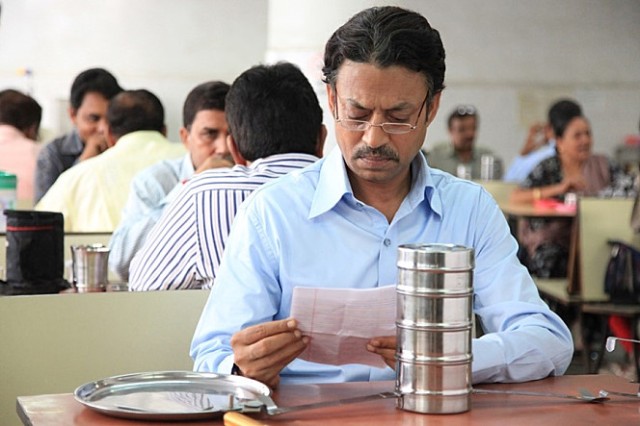 While it is a pretty familiar story we have encountered before, “The Lunchbox” is mixed with enough spices to give it a distinctive flavor to appreciate. Vividly bringing us into its local background, it comes to us as a heartfelt tale about two people who happen to be connected with each other in an unexpected way, and it is touching to see how their respective lives are changed through their mutual relationship which may not last long.

The opening scene shows a young housewife named Ila(Nimrat Kaur) going through her mundane morning routine. Her husband has already left for work, and her young daughter is soon going to leave for school, and now she has to prepare the lunch for her husband. We see each component of the lunch being prepared and then put into a stainless steel lunchbox, which is then put into a green lunch bag ready to be collected by a delivery man.

While reading several articles on the movie, I came to learn that lots of lunchboxes are delivered like that in Mumbai, and it was interesting for me to get some direct glimpses on how this delivery system works. A delivery man, “dabbawala”, collects a bunch of lunch bags along with the one from Ila’s house in her neighbourhood, and then he joins other dabbawalas at the train station, who also carry many lunch bags to be delivered. After they are sent to the downtown area by train, these lunch bags immediately go through another transaction process, and they all are delivered to their respective recipients around the lunchtime.

Considering the average number of lunchboxes transacted everyday in Mumbai is more than 100,000, it is not surprising that Ila’s lunchbox is delivered to a wrong person by mistake. Saajan Fernandes(Irrfan Khan), a middle-aged man who is about to retire from his company where he has worked for 35 years. He is confounded to see that the lunch he receives is quite different from the ones he ordered from his usual restaurant, but, after having tasting a little of it, he quickly eats it all with satisfaction.

When the lunchbox is returned to her home, Ila is happy to see its empty state, but she soon realizes there was a mistake. Her husband Rajeev(Nakul Vaid), who received Saajan’s lunchbox instead, does not talk much about it when he comes home in the evening, and Ila quickly infers from his brief remark that the lunchbox was sent to a wrong person. When she prepares another lunch, she puts a note for appreciation in the lunchbox, and that is the beginning of her relationship with Saajan. It is just a small exchange of notes at first, but then they begin to write long letters to each other, and they become closer to each other as the lunchbox goes back and forth between them everyday.

This is surely a common romantic promise we have seen from other films(“Charing Cross Road 84”(1987) came into my mind as I was watching the movie), the director/writer Ritesh Batra makes his story work even though his two main characters are mostly separated from each other in the movie. While the interactions between them are confined within the written words read by the actors, we get to know more about them as they respectively go through their daily lives, and we come to slowly sense how their lives are affected by their relationship. Frustrated with her estranged relationship with her husband, Illa is grateful to know that someone is appreciating her cooking efforts, and Saajan becomes more aware of how lonely and barren his life has been since his dear wife’s death. He has lived alone in his house for years, and he felt no problem with that, but now he feels something missing in his house as interacting with a nice woman he has not yet met in person.

The movie eventually leads its main characters to a certain point expected right from the budding of their relationship. Ila learns that her husband does not love her anymore, and she and Saajan see the possibility of living together somewhere as talking more with each other, but both of them are not quite sure about whether that can be possible. They have certainly felt good as sharing thoughts and feelings through their letters, but will that feeling last long even after they meet each other for the first time?

Batra’s screenplay wisely sidesteps melodramatic clichés during its last act, and it also provides us warm, humorous moments as handling its two likable main characters with respect and care. Nawazuddin Siddiqui, who plays a young employee who will replace Saajan after working with him for a while, is one of the major sources of humor in the movie; he initially looks like an ingratiating puppy trying too hard to get approval, but you cannot help but like this overly eager guy as getting to know a bit more about him and his life. I also enjoyed the conversation scenes between Ila and an old neighbour living upstairs; we never see that old lady while they talk through windows, but she becomes a sort of endearing presence as she gives Ila some help and advice for cooking.

The success of the movie depends a lot on its two lead actors, and their separate performances work along well with each other despite the constant physical gap between them on the screen. Irrfan Khan, a veteran Indian actor I happened to notice for the first time in Mira Nair’s “The Namesake”(2006), conveys a slow, gradual change inside his character through his quiet, soulful performance, and Nimrat Kaur, a young lovely Indian stage actress at the beginning of her film career, is also convincing as a woman opening her eyes to another potential in her life through the accidental friendship with a stranger.

“The Lunchbox” received the Critics Week Viewers Choice Award at the Cannes Film Festival in last year, and it deserves the award as a warm, sensitive crowd-pleasing film. As a guy who enjoyed several recent visits to an Indian chain restaurant in my town, I was a bit disappointed to see that the movie did not show its dishes a lot, but its drama works thanks to thoughtful direction and good performances, and I enjoyed it despite the uncomfortable screening condition I had to endure during last Sunday afternoon. I am mildly satisfied with it at present, but it may deserve a second chance like its good characters. 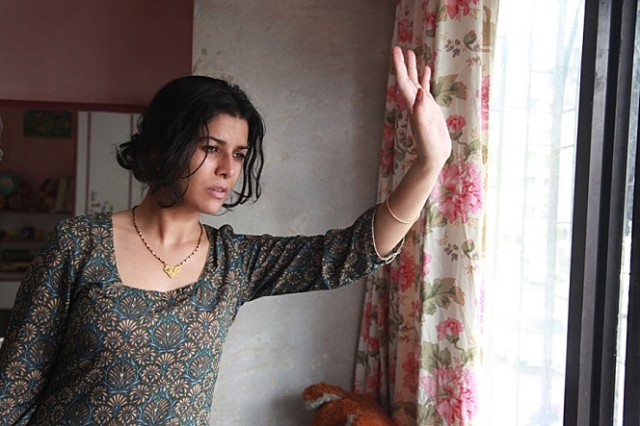 This entry was posted in Movies and tagged Cooking, Lunchbox, Romance. Bookmark the permalink.