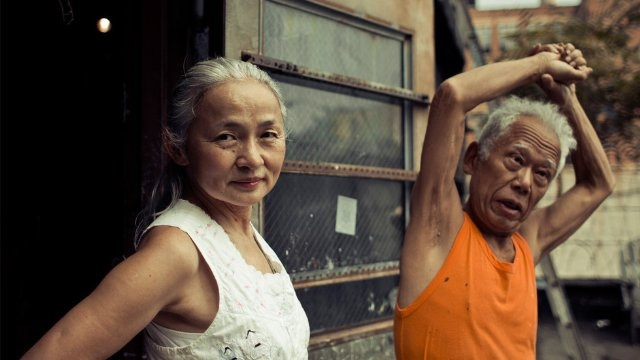 They fell in love with each other as artists, and they have been inseparable from each other as life partners for 40 years. The documentary “Cutie and the Boxer” is a quirky love story between two artists complementing each other through their contrasting personalities, and it looks closely inside not only their artistic activities but also the long, dynamic relationship between them. They went through many difficult times, but now they arrive at an equilibrium point, and they are still happy to be together along with the artistic satisfaction for both of them.

Noriko and Ushio Shinohara are living at their small, shabby, but cozy home in New York, and the opening scene begins with Noriko waking up her husband in the morning. It is his birthday, and they celebrate it in the kitchen in a rather modest way, and then we see Ushio doing his work at his studio. Reminiscent of Jackson Pollock’s action painting, he wears gloves strapped with foam rubber pads which are soaked with black paint, and then punches into the canvass as he is moving from right to left. Like many modern artworks both baffling and fascinating me, I do not know whether the result is profoundly simple or simply profound, but I can say the process itself is interesting to watch at least.

Anyway, Ushio has some reputation as an avant-garde artist since he came to New York during the early 1960s. Although he has been not as successful as other famous contemporary New York artists, there was a time when he drew lots of attention as a new talent to watch through his ‘boxing painting’ and odd motorcycle sculptures, and we see the photo of him sitting with Andy Worhol at one point. He is 80 now with no big commercial success, but he keeps working, and he is still visited by several people interested in his artworks, though he sometimes sells them for himself to earn money to support him and his wife. 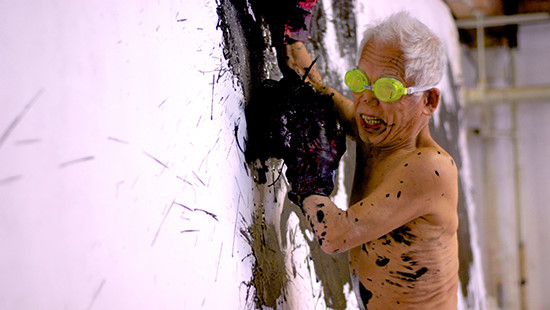 Noriko has been not only his wife but also his assistant and housekeeper for many years since they married. Not long after she came to New York with her own artistic ambition in 1973, she came across Ushio by chance, and they quickly became lovers despite considerable age difference(she was 19 while he was 41). They soon married, and Noriko was happy to have her artistic talent encouraged by someone who loved and understood her as a fellow artist.

But she eventually found that she had very little time for her art because she was usually busy with taking care of everything in their household. While her husband was mostly occupied with his work or drinking, she was the one who had to support the household, and that task was not so easy for her – especially when her parents stopped sending money to her. Noriko says with regret that they were not good parents for their young son Alex because they did not provide him good environment for growing up, and their home video footage provides some glimpses into that messy time. While Ushio is drunken as usual with his friends, his son is quietly taking a bath alone in the bathroom, and then we see him sneaking into his bedroom while his father keeps talking and drinking.

We meet adult Alex when he comes to his parents’ home, and he is certainly the apple who does not fall far from the tree. While less outgoing than Ushio, he drinks too much just like his alcoholic father once did(Ushio no longer drinks due to his recent allergy problem), and he is an artist like his parents. At one point, he shows his self-portrait to his mother along with his other recent works, and I think that self-portrait tells a lot about how this introverted guy has felt about himself. 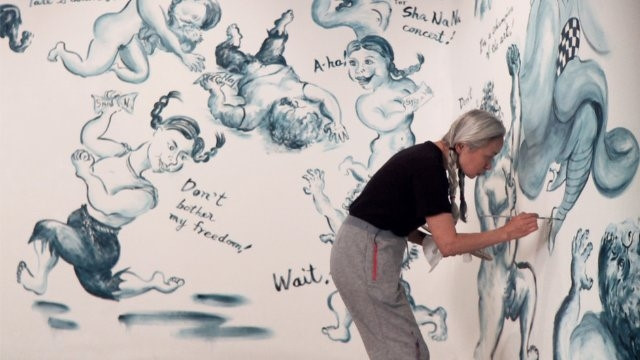 Meanwhile, Noriko recently takes the first important step for her dormant career, and we see her working on drawings in her private place. Inspired by her difficult married life with Ushio, she has made a bunch of drawings for her comic book work titled “Cutie and Bullie”, and these lovely drawings shining with humor and wits are effectively used for the animation sequences in the documentary, which give us some insights into how the relationship between Noriko and Ushio has managed to work despite their many problems. He was more or less than a wilful child in the need of being taken care of, and she was the right one to take care of him with lots of love and patience, and they were bonded together through their love as well as their passion toward art in their good times and bad times.

Ushio, who still shows his immature side although he looks softened compared to his wild years, and Noriko, who still retains her girlish side represented by her braided hair, bicker with each other at times in front of the camera, but it is clear that they cannot possibly imagine the life without each other. Their conversations are always surrounded with warm affection and understanding between them, and now their relationship is being changed as Noriko is gaining her own artistic position. When she sees her husband’s latest work, she honestly tells him it is not good, and he agrees with her reluctantly. After more struggle and efforts, he makes a new picture later, and that looks better at least in my view.

The director Zachary Heinzerling, who was recently Oscar-nominated for his documentary in last month, gives us an intimate look at one interesting and lovable artistic couple, and it is alternatively funny and poignant to watch as we observe them moving on with their life as before. He may be approaching the end of his career now, and she is blossoming in her career in contrast, but Cutie and Bullie will stick together as usual till the end – and they will continue to box with each other as they did many, many times. 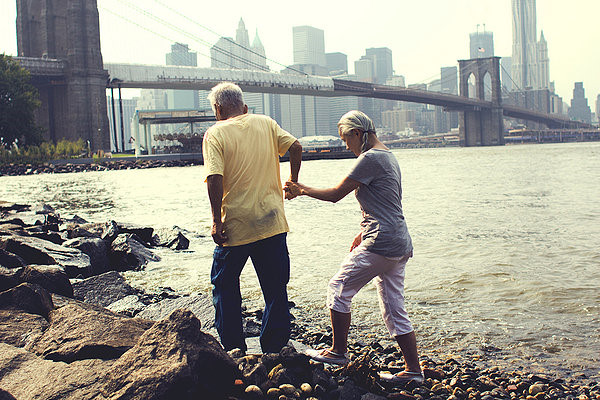 This entry was posted in Movies and tagged Artist, Documentary, Husband and Wife. Bookmark the permalink.