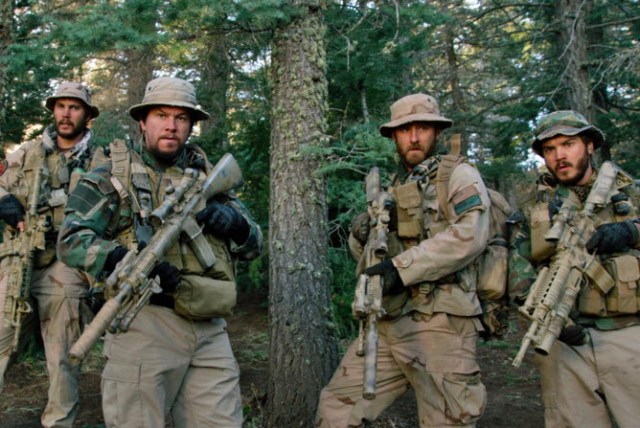 “Lone Survivor” does as much as an average gritty modern war film can do. It has several intense combat scenes to talk about, and it is sometimes grueling to watch its military characters struggling through their increasingly perilous situation which harshly tests their physical and psychological strength. There is a particular scene in which they rapidly tumble down a stiff slide after being flown off by another explosion during their combat, and it is rather amazing that they manage to survive and then keep moving on even though their bodies kept crashing hard into rocks or trees as they tumbled down and down along the slide.

I do not know whether that is possible or not, but I guess that really happened during the Operation Red Wings, a failed Navy SEALs mission in Afghanistan in 2005. Recognizing and honoring those brave men sacrificing for their country as doing their duty, the movie intends to be a passionate tribute to them from the beginning, and it does its job well in technical aspects, but it does not bring anything new or insightful to its genre in comparison to other more thoughtful movies and documentaries about warfare.

As reflected in the montage of real Navy SEALs in training shown during its opening scene, the movie sticks to the viewpoint of its characters from the start, and it looks no further than that. Before the mission begins, we are introduced to four members of SEAL Team 10 one by one, and then we get to know a bit about them while observing how they and other team members get along well with each other as the band of brothers who would watch for each other’s back on their battlefield.

These four guys are Marcus Luttrell(Mark Wahlberg), Michael Murphy(Taylor Kitsch), Danny Dietz(Emile Hirsch), and Matt ‘Axe’ Axelson(Ben Foster). After the briefing of their latest operation, they are sent together as a reconnaissance/surveillance team to track a vicious Taliban leader named Ahmed Shah(Yusuf Azami) in Afghanistan’s eastern Kunar Province. Not long after they begin their reconnaissance, they succeed in spotting their target in some village while hiding in the forest, but the situation is not exactly ideal for them for several reasons including the radio transmission problem due to their location surrounded those rocky mountains of the Hindu Kush Mountains.

The director/writer Peter Berg, who adapted the nonfiction book written by Marcus Luttrell and Patrick Robinson, keeps the tension slowly rising as the mission continues. Always watchful and careful as trained, these soldiers sometimes let themselves relax a little during their small conversations, and the main actors are believable on the screen as the team members who have been through many things together.

Despite their caution, Luttrell and his comrades get themselves into an unfortunate circumstance. They happen to be exposed to three goat herders from the village, so they retreat after releasing these herders, but then they are soon ambushed by Shah’s Taliban guys, who were probably informed by one of the released herders. The movie is not exactly clear about that, but it is so blatant in its suggestion through that minor character’s wordless spite on his face that the brief discussion between Luttrell and his comrades on what they should do with their temporary prisoners naturally feels contrived and superficial.

As soon as the first shot is fired, the movie becomes more intense with lots of bullets and explosions, and it relentlessly pushes its characters into the grim situation which gets worse and worse as their bodies are injured and smeared with blood. The action scenes in the film are as gritty and urgent as required, and its effective sound effects on the soundtrack will make you squirm as you hear the sound of bullets scratching clothes and skins or penetrating into flesh and bones.

Mainly because of its title, it is not much of a spoiler to tell you that only Luttrell survives around the end of this terrible circumstance. He is later helped by some nice villager(played by Ali Suliman from “The Attack”(2012)), and then the movie sinks itself into a standard shoot-them-up action mode which does not mesh well with the punishing realism brandished during its middle part. Despite the language barrier between them, enough mutual understanding is exchanged between Luttrell and that villager just because they both are good guys against the Taliban guys, and that took me back to Berg’s previous film “The Kingdom”(2007), which also sets its ‘balanced’ view through a number of native characters helping and bonding with its main American characters(Suliman also appeared in that film as one of them, by the way). 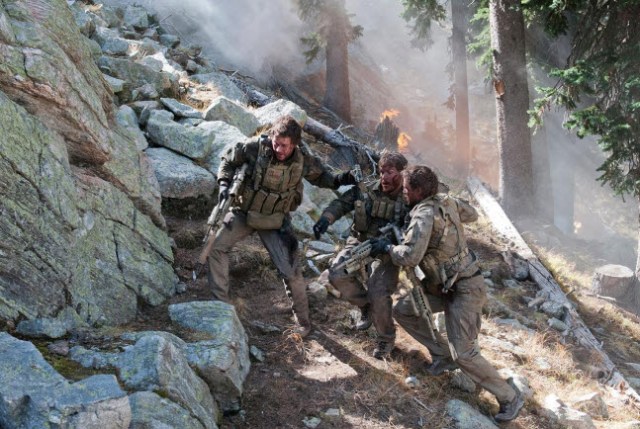 And then we get the climactic action scene which can only happen in movies, not in real life. I later did some search on Internet out of curiosity, and I learned from Wikipedia that Luttrell was really saved by the kindness of a stranger as depicted in the film, but his eventual rescue was in fact far less dramatic, though the man who rescued him and others in his village did protect Luttrell from the Taliban guys as following their code of traditional honor.

Even if you can overlook that exaggerated fictional aspect and its other problems including weak characterization, “Lone Survivor” still looks rather questionable in its intent even though I appreciate its good technical aspects and performances. With Mark Wahlberg as the inevitable center, Ben Foster and Emil Hirsch give engaging supporting performances as we can expect from them, and Taylor Kitsch also is solid as the on-ground leader of the team. At the end of the story, the movie sincerely salutes to not only four men depicted in the film but also the other guys of their Navy SEALs team who participated in the operation, but it does not look deep into warfare while unabashedly looking up to their noble act of valor, and it does not resonate like “Platoon”(1986), “Black Hawk Down”(2001), and “The Hurt Locker”(2008).

Maybe because I am a foreign audience outside US, “Lone Survivor” feels to me more like a recruitment film rather a realistic war film. I will not deny that Peter Berg made his movie with all the passion and respect he had in his heart, and this is a well-made war movie which is dynamic and exciting during its action scenes, but I could not help but notice how its good elements were packaged in a typical jingoistic tale of bravery. Yes, these brave young men deserve recognition for their service no matter what you think about the current situation in Iraq and Afghanistan, but I have seen better films about warfare and people, and they accomplished that mission a lot better than this standard stuff.