I initially thought I should not tell you about a crucial turning point in the plot of French thriller film “Love Crime”, but, on the second thought, it does not matter much. Although it begins with one thing and then moves to the other thing, you can quickly predict something is going to happen sooner or later as watching its two conflicting main characters, and the movie does not even try to hide that from us while calmly watching how its plot is rolled to its predictable but inevitable finale with the sense of a cold, vicious fun.

The center of its morbid fun is Christine(Kristin Scott Thomas), an executive of some international corporation who will be your worst nightmare if you happen to work under her. She may look nice and generous on the surface when we see her working on their latest assignment with her assistant Isabelle(Ludivine Sagnier) during one late night at Christine’s big mansion, but we also sense the cold heartlessness beneath her gestures even when she treats Isabelle like her team member.

In case of Isabelle, a shy, introverted young woman with lots of potential who has somehow risen in the cutthroat world of corporation business, she does not feel bad about her professional relationship with her boss. Still not feeling confident or sure about herself despite her considerable career advance, she is always in the need of being appreciated and loved, and Christine has been exploiting it for her own advantage. She talks to Isabelle like her best friend and her generous mentor, and, out of loyalty and love, Isabelle willingly serves her boss at any time. As a matter of fact, she is so considerate that she virtually gives up her own idea to Christine at one point while making it sure that it will be presented as Christine’s idea. 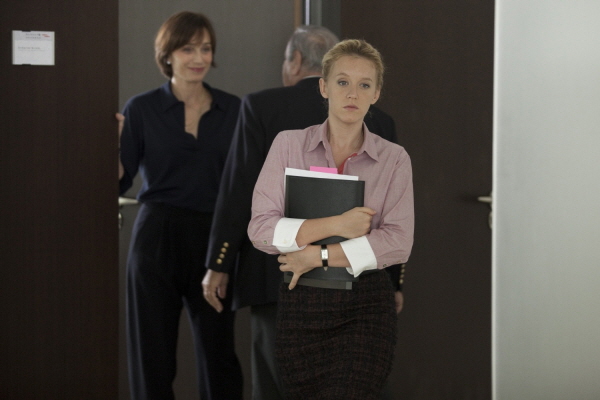 This toxic relationship can go on and on like that, but Isabelle’s dissatisfaction has been growing deep inside her as her own assistant Daniel(Guillaume Marquet) keep suggesting that she should think more about her future and her career. Though it is probably not the first time, Isabelle is pretty pissed when Christine makes her do all the works and then gets all the compliments later, so she decides to do something behind her back as soon as she sees a golden opportunity she cannot resist. After all, her mentor taught her that she should grab any chance thrown to her, didn’t she?

However, when Christine sees that her ‘protégé’ is becoming a competitor looking toward a higher position Christine is also eager to occupy, she is becoming far meaner than ever. First, she hurts Isabelle deeply on the personal level through a cruel deception, and then she humiliates Isabelle openly on the public level in front of other executives during the company party. While it is now certain that she will get that position as she wanted, Christine even goes further; she is determined to make Isabelle into her lifelong slave, so she blackmails Isabelle into accepting their changed circumstance.

Isabelle seems to be conforming to her boss’ sadistic demand, but it is slowly revealed that something is prepared in her mind as we see her doing several seemingly inconsequential things, and the people at the company including Daniel look at her with some concern as she looks increasingly neurotic and unstable while popping pills into her mouth. They are not surprised about that, for they are well aware of how mentally grueling it is to work under the boss from hell like Christine(According to one of them, Isabelle’s predecessor is currently in a mental hospital after suffering a mental breakdown).

And then something finally happens as we expected, and the movie moves to a different mode. I do not dare to talk about that in details, but let’s say the director/co-screenplay writer Alain Corneau, who died not long after the movie was released in France, made a competent thriller which can hold our interest even when we can clearly see where it will arrive at. Isabelle is suddenly hurled into a very difficult situation while there seems to be nothing to save her, and the main pleasure during the second half of the movie is how that circumstance is gradually reversed as she is surrounded by the mounting evidences against her alleged crime.

The movie depends a lot on the performances of two lead actresses, who did a fabulous job in their respective roles. Ludivine Sagnier is good as a passive woman destined to be pushed by others around her; her detached face convincingly hides what has been accumulated for years behind it, and her neutral performance also works effectively when her character is facing a grave possibility which will affect not only her carrier but also her life.

Horrible bosses in the movies have usually been plum roles to talented performers, and Kristin Scott Thomas delivers a compellingly diabolical performance with understated malicious humor; Christine is a mean cold witch who will get what she wants by any means necessary, and it is almost a guilty pleasure to watch her dominating over Isabelle and other executives in the company including Phillipe(Patrick Mille), a good-looking dude who unwisely lets himself be stuck between two women he sleeps with when he has something to hide from others.

I hope I did not tell you too much about how everything in the plot will be eventually played out in the end. Many things in the movie are pretty predictable(I could easily guess that a certain supporting character would be a crucial factor in the story later as soon as that character appeared), but its pleasure lies in how they are executed, and I enjoyed the virulent dynamic between Sagnier and Thomas on the screen. The ending and the plan involved with it may be a little too neat to plausible, but this is a neat thriller with slick atmosphere from the start, and I guess that comes with the territory. 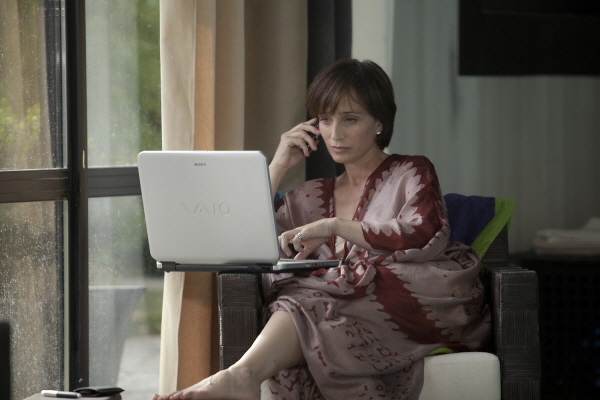 This entry was posted in Movies and tagged Thriller. Bookmark the permalink.