South Korean thriller film “The Terror Live” throws us straight into its deadly situation right from its opening scene, and it stays on this situation within its limited space from the beginning to the end. This is a familiar premise we have seen from many other thrillers including “Phone Booth”(2002) and “Buried”(2010), and the first half of “The Terror Live” does a fairly nice job of setting the story and the tension inside it. Too bad it loses its focus and eventually stumbles a lot during its second half while trying too hard and too much to my disappointment among its ruins.

At the beginning, it looks like another usual morning in Seoul to Yoon Yeong-hwa(Ha Jeong-woo), a former TV anchorman who was recently demoted from his TV news job for some reason and now has been running the morning radio show for a while. Not long after the show is started, he happens to receive a phone call from an anonymous guy, and this guy announces that he is going to blow up the Mapo Bridge, one of several bridges on the Han River of Seoul.

Yeong-hwa thinks the guy is joking, so he casually(and callously) dismisses this threat at first, but he soon comes to realize that this guy is not joking at all. After a few minutes, a sudden big explosion is heard from outside his broadcasting company building, and Yeong-hwa and others see the smoke from the Mapo bridge from the distance. It is later followed by another explosion, and several hostages are trapped on the disconnected part of the bridge which can be collapsed by itself – or blown up by another bomb planted in that part.

Although shocked by this terror incident just like others in the studio, Yeong-hwa quickly resumes his professional attitude while discerning the chance for his comeback from this terrifying situation. The bomber wants to talk with him on live while promising that he will turn himself to the police once his demand is fully accepted, and that is an offer Yeong-hwa cannot refuse. Rather than reporting it to the police first, he decides to promptly broadcast it as an exclusive scoop; his radio show studio is quickly turned into a TV news studio under his boss’ permission, and he is ready for his close-up.

However, he quickly realizes that this is the bargain more perilous than he imagined – especially after the bomber notifies that Yeong-hwa should be really, really careful in front of the camera. Not only he has several big bombs ready to be detonated around the city, but also he has hidden other bombs inside the studio building, and the other TV anchor is injured when she tries to continue the talk with him instead of Yeong-hwa. The bomber has also planted a tiny bomb in Yeong-hwa’s earpiece; he must remain in the studio, he must continue the show no matter what happens, and, above all, he must persuade the government officials to accept the bomber’s demand.

The movie firmly sticks to its limited space for accumulating the suspense on the screen. The urgent circumstance outside the building is mainly shown through the TV monitors in the studio, and the movie generates several devastating moments even though we only observe them indirectly through the TV cameras. There are also several supporting characters in the studio telling Yeong-hwa what is going on and off the screen, and they give him both hope and desperation as he is kept pushed by them as well as the bomber. His boss only cares about higher viewing rating(he even orders Yeong-hwa to provoke the bomber to kill the hostages for the advantage of his company and the government), and the government officials see him as someone expendable while more focusing on saving their positions in this emergency, and it is not so surprising that Yeong-hwa comes to see himself trapped in more than one way as the time goes by.

The director/writer Kim Byeong-woo tries to imbue urgency and verisimilitude into his story with choppy editing and shaky handheld camera, but this does not work as well as he intended, and the result is too distracting at times. He moves the camera around his limited space too often while the flow inside his scenes is frequently disrupted by the inattentive editing style, and that made it harder for me to focus on the story or the circumstance inside it.

And the story itself is problematic because it considerably loses its momentum while stuffed with too many things including angry social comment and conventional character development during the second half. It becomes very confusing as a result, and I still cannot clearly understand the reason behind Yeong-hwa’s demotion or some shady deal outside the studio to make him into a potential scapegoat in the aftermath. The movie could have been improved a lot with the deletion of its several supporting characters and story elements, and I was particularly irritated by one minor supporting character, who behaves so stupidly during his scene that I even wondered whether he was secretly driven by death wish. The audiences around me correctly guessed what would happen and we were not so shocked by the inevitable consequence because, after all, he asked for it. 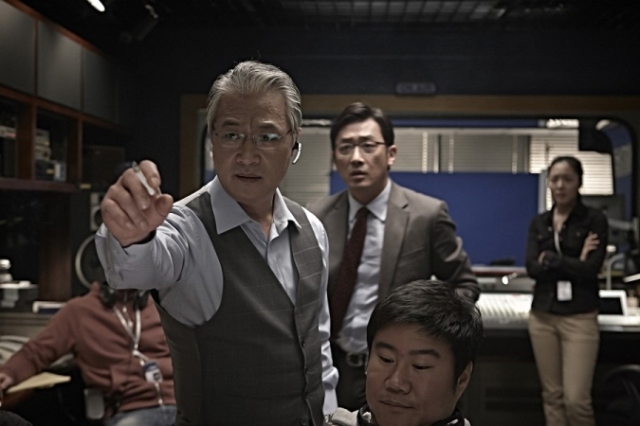 And in case of the bomber…. well, he is pretty predictable during many moments despite his bag of tricks full of many shocks and awes. He kindly gives the information about not only his name but also his miserable life as an exploited victim of the heartless jungle called South Korean society, but you know he cannot be trusted if you are familiar with thriller films, for he is mostly presented through the voice from the other end of the line. After walking out of the screening room, I agreed with the other audiences that he could have chosen a better way of accomplishing his ultimate goal instead of stupidly wasting his little remaining time during the third act, and I concluded that he is a typical case of “The Third Act Syndrome”, which has made many clever/resourceful villains in thriller films incredibly dim around the ending.

The movie manages to end its situation with a disturbing punch to the audiences, but, unfortunately, it has already lost most of its suspense around that point, and I kept noticing lots of things which did not make sense. Let me tell you about one little but glaring visual error; during one shot shown through TV screen, you can see a taxi being leisurely driven alone on the street right next to a damaged building which can be collapsed at any moment. Seriously, who can possibly want to drive around that building at that point? And, above all, shouldn’t a certain unseen but important character be moved farther from the terror scene for his safety even if he is demanded to talk with the bomber on live? I don’t dare to reveal the identity of the actor providing the voice of the bomber, but I must say that his voice does not have enough menace or gravity even though this good actor tries his best with his thankless role.

“The Terror Live” is a passable thriller requiring more trimming and polishing despite its notable strong points. Although he does not have lots of things to do except looking pressured and conflicted in front of the camera, Ha Jong-woo gives a good central performance supporting the flawed plot he is stuck with, and the movie does have a few unexpected turns to surprise you. I appreciated how far the movie attempts to go in its limited space, but, in the end, it did not hold my attention or itself well in its shaky ground.