I become 30 in this year, and now I cannot be described as ‘a lad’ any more although being 60 is not very old in these days. Whenever I feel like being young, my chubby body sternly reminds me of that harsh truth at the campus gym, and that is probably why I frequently look back on 13 years of my messy campus life at Korean Advanced Institute of Science and technology. While being on a morning shuttle bus to the campus, I usually reflect on how much I have messed up during last 13 years, and then I wonder whether I could have made wiser decisions to make my life better.

When I saw the silent, melancholic face of Camille Vaillant(Noémie Lvovsky), the heroine of a warm, bittersweet French comedy film “Camille Rewinds”, I could instantly sense what she felt inside her mind because of my similar situation. Although mine is brighter compared to hers, I am familiar with that kind of frustration and desperation behind her tired face, and I can easily imagine her saying to herself: “how was everything in my life screwed up like that?”

We all have lots of frustration and disappointment in our life, and you may sympathize with Camille’s life problems even if you find her not so likable at the beginning. While her acting career is going nowhere(her latest job is getting her throat slashed as a victim in some cheap thriller film), she is also going through a difficult time in her personal life; her husband Éric(Samir Guesmi), who married her when they were just high school kids 25 years ago, has left her for some young girl, and, though they will be soon divorced, they are still bitter to each other when he comes to her apartment where he used to live with her.

It is New Year’s Eve, so Camille, who is on the verge of becoming a high-functioning alcoholic and lonely cat lady, goes to the party held at the apartment belonging to one of her high school friends. As she hangs around with her dear old friends, she becomes a little more cheerful than before thanks to music and alcohol, and the new year is approaching to her minute by minute as she keeps emptying glasses and bottles all night long.

In the next morning, she wakes up to find herself in the hospital, but, to her confusion, everyone treats her as if she were a teenage girl, and then, to her surprise, her parents come to the hospital to pick her up while looking exactly same as they were 25 years ago. Camille gradually grasps this baffling situation; probably because of her strange encounter with an odd watchmaker(Jean-Pierre Léaud) before the party, she is transferred back to her high school days during the 1980s, and she becomes a high school student again although she looks same as before in our view.

Now a certain movie will instantly come to your mind if you have seen it. Yes, “Camille Rewinds” is clearly inspired by Francis Ford Coppola’s equally charming fantasy comedy film “Peggy Sue Got Married”(1986), and, like Coppola’s film, the movie draws lots of laughs as Camille tries to adjust herself to this sudden change. She manages to look normal to others, but she is still an older woman trapped inside adolescent body; she cannot help but observe her high school life as an adult looking over her past and, that certainly baffles others around her at times.

As she gets accustomed to her rewound life, she finds herself becoming happier and livelier. Although she knows that her gentle mother, played by Yolande Moreau, will die within 2 months and learns that there is nothing she can do to change her mother’s fate, she is willing to spend little but precious time with her parents at their cozy home whenever she can. With her colorful friends, she experiences their carefree moments again, and the songs from the 1980s are naturally played on the soundtrack as they have a fun together. The director/co-writer/lead actress Noémie Lvovsky subtly displays the gradual rejuvenation inside Camille through her appealing comic performance, and she does look younger than before around the point when we see Camille lose herself with her friends during a night party. Like Lvonvsky, her co-performers play both old and young version of their characters, and they play along with each other well on the screen while making us forget about their ages for a while. 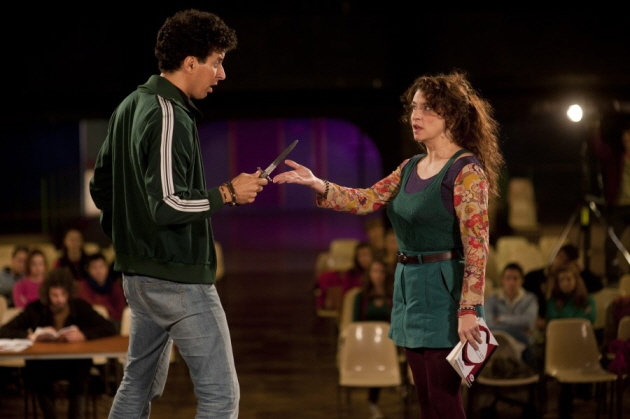 Meanwhile, Camille finds herself attracted again to younger Éric. As a woman who once loved him, she remembers how he was, but she is also painfully aware of how their long relationship will be terminated in the end. She avoids him, and she rejects him, but she cannot fool Éric and others – especially when She and Éric happen to participate together in the school play under an overacting drama teacher(Micha Lescot). The things become more complicated later when her older mind is attracted to someone to whom she had never paid any attention previously – and a certain fateful incident finally happens to Camille and Éric.

“Camille Rewinds” is a little comedy as enjoyable and smart as its supposed inspiration. While looking endearingly at the past, it also touchingly recognizes that life is a sort of one-way road to all of us. I once thought about whether I can do better if I go back to 10 years ago right now, but I think I will do no better than Camille; I will probably find myself again on the same problematic path I have been on during last 13 years, even though I am a bit wiser than before.

There is poignancy in the conclusion at which Camille arrives through her unbelievable personal journey, and my mind looked back on my bumpy life again while watching it. I have regretted about many things in my past, but I am grateful to my miserable life for good things and bad things, and that is why I was touched by a lesson learned by Camille in the end. It is never late to wake up and move forward – while appreciating some good things in your past.