Unless there is a more admirable technical achievement in the South Korean Film industry in this year, the special effect in new South Korean film “Mr. Go” deserves all the special effect awards it will receive in the local film award ceremonies. Although CGIs are now pretty mundane things to us nowadays thanks to lots of blockbuster films we are showered with every summer, the people behind “Mr. Go” did a nice job of making their CGI gorillas look convincing in every frame, and I had no problem with appreciating their commendable achievement because I believed their existence on the screen. These gorillas in the film are good CGI actors, and their skin, furs, facial expressions, and movements do show the immense efforts put behind the scenes.

But the premise of its story is rather shaky to say the least. Seriously, can the audiences at the stadium really be that enthusiastic about a gorilla playing baseball? Can the characters in the film really be that serious about this big, mountainous gorilla participating in the baseball game along with human players? And how do the human players think about this outrageous recruitment which makes their game look more like a circus?

Anyway, the movie pushes its questionable premise through the respective motives of its two main characters. Wei Wei(Jiao Xu), a 15-year-old circus ringmaster of a failing troupe in China, has been struggling to manage her troupe after her grandfather died during an earthquake incident, and we see her life story and daily struggle through the documentary footage sequence at the beginning. Although she is young, this plucky girl ably takes care of many things in her troupe including educating young kid members, and these small kids are good help to her whenever a local loan shark Lin Xiaogang(Kim Hee-won) comes to collect her grandfather’s huge gambling debt.

Xiaogang suggests that she should sell her male gorilla Ling Ling, who has been trained to play baseball thanks to Wei Wei’s grandfather’s enthusiasm toward baseball. Wei Wei is absolutely against that because she and Ling Ling have been close to each other since she was a baby, and Xiaogang, who is rather a dim comic relief than an evil villain, always leaves without money in his pocket. I must say this is the first time when I saw a loan shark in the movie making a tearful plea to his debtor to pay him the money as soon as possible.

Wei Wei is determined to find a way to get the money for paying the debt and galvanizing her troupe, and an opportunistic South Korean sports agent Seong Choo-soo(Seong Dong-il) approaches to her with a proposal too good to refuse; he will take Wei Wei and Ling Ling to South Korea, and then Ling Ling will be a popular baseball player in the South Korean major league. When Ling Ling is traded to the Japanese major league after presenting his talent in several big games, she will get the money, and so will he.

Now I can feel your eyeballs rolling in disbelief, but you may admire how the movie tries to keep its attitude straight in front of its many outrageous aspects. Some influential figures in the South Korean baseball community are naturally outraged by this circus-like situation, but others stay on professional mode while as if it were the routine recruitment of a foreign player, and, rather than booing, the audiences at the stadium look fascinated and excited by the sight of a 600-pound gorilla at bat. Jackie Robinson would envy this gorilla if he watched this movie.

As expected, Ling Ling is a terrific hitter, and he hits the balls whenever he can, but the movie does not go into details about how the game can be possibly played with him during nine periods excepts showing the montage of Ling Ling hitting balls to the sky, and I begin to wonder about how the other baseball teams come to decide to play against such an unbeatable match. As a matter of fact, the major action scenes in the movie are not involved much with baseball, and we later have two dueling gorillas as the climax after another gorilla, which incidentally also belongs to Wei Wei, is recruited by the other team as a pitcher(I felt really sorry for his catcher for the reason you can guess).

By the way, does Ling Ling understand anything happening around him? And does he care about, uh, his team? Although we see how Ling Ling and Wei Wei communicate with each other inside and outside the field, and they are still an animal and his master, and I remember that famous sentence written by W.G. Sebald, which was sometimes quoted by my late friend Roger Ebert in his reviews: “Men and animals regard each other across a gulf of mutual incomprehension.”

The movie also feels disjointed in case of story and characters. The human characters are mostly broad caricatures, and I did not care a lot about them. Even though we understand they really care about her gorilla, Wei Wei and Seong Choong-soo are actually doing a cruel thing to their gorilla for their mutual benefits, and the movie is almost on the verge of animal cruelty around its third act. The movie struggles to make dramatic points, but it seems it does not know when it has to hit them, so Jiao Xu remains stranded at times without any clear direction while we are reminded that our poor noble beast is forced to do lots of things by the plot despite its less-than-ideal physical condition. Thank God he is a CGI creature.

The actors try their best, and the best thing about their performances is that they always look believable with their CGI partner on the screen. Jiao Xu reportedly said she did not understand her character well and that is clearly shown at several points, but she acquits herself well while going between Chinese and Korean dialogues with little awkwardness. Seong Dong-il has an amusing scene when his character has a drinking time with Ling Ling at his expensive home, and Jô Odagiri is intentionally silly in his juicy cameo appearance.

“Mr. Go” is based on a popular South Korean comic book series written during the 1980s, and maybe the comic book version is more convincing in its realm of fantasy. Like in his previous works “200 Pounds Beauty”(2006) and “Take Off”(2009), the director Kim Young-hwa made an effective use of the special effects here, and the movie is not as bad as I worried – but it could have been better if more attention had been paid to story and character development. 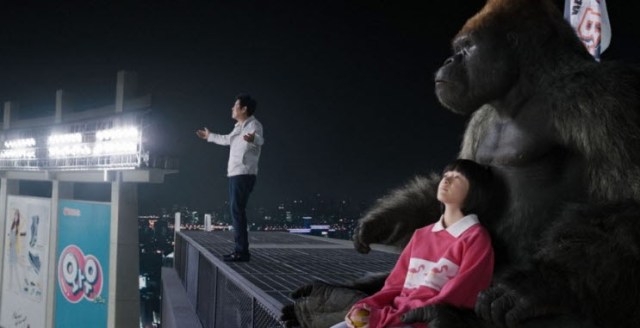