“A Late Quartet” plays a familiar life drama in a deep, somber tone with its reliable instruments. Using one famous classic piece as the metaphor of life, the movie observes the harmony and disharmony between the human characters who have played together for many years, and there is subtle tension beneath its calm, steady performance as the characters muse on themselves and their personal/professional life after encountering one bad news. They slowly begin to wonder: is this the end for their long collaboration? Or can they continue without change?

As winter settles on New York, the new season is about to begin for the members of the Fugue Quartet, and we are introduced to its four members one by one. Peter Mitchell(Christopher Walken) is a cellist who has been an elderly mentor/father figure to other members; he lost his dear wife in last year, but he is ready for the new season like an old trouper. Juliette Gelbart(Catherine Keener) is a viola player, and she also misses Peter’s wife because Peter and his wife had literally been the step-parents to her since Juliette’s mother died. Juliette is married to Robert Gelbart(Philip Seymour Hoffman), the second violinist, and they have a daughter named Alexandra(Imogen Poots), who now becomes a young aspiring musician just like her parents were. Daniel Lerner(Mark Ivanir), the first violinist, is a fastidious perfectionist dedicated to his art, and we see his score book full of notes and instructions for his performance as he starts his routine practice.

They founded their quartet 25 years ago, and, though it was just one small step at the Julliard School at the beginning, but now they become a world-renowned quartet through their first-class performance, and they all live in comfortable and luxurious environment thanks to their following success. Their schedule is already filled with many appointments around the world, so they will be quite busy while doing routine practices and adjusting their hectic schedule if necessary.

But things will not be the same as usual in this time. Peter is diagnosed with Parkinson’s disease, and that means he will retire sooner or later. When he breaks this news to other members, they are naturally concerned about him. Peter is not seriously ill yet and his illness can be slowed down by medications, so maybe they do not need to worry about it yet, but it is apparent to everyone that the change caused by Peter’s illness can be inevitable; he will probably not be around them in the next season, if not this season. 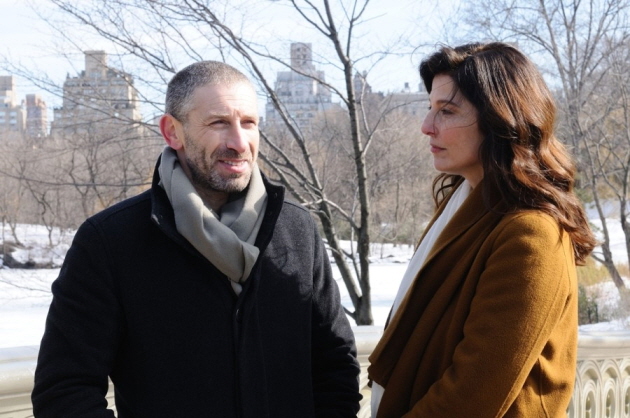 As an old, wise man, Peter accepts his approaching illness with resigned attitude. Disturbed by his news, other members think or discuss about how they should handle this unexpected situation, and, not so surprisingly, we see the emergence of old feelings involved with bruised ego, insecurity, jealousy, and other things they have kept inside themselves for playing as one group together. Peter has been the rock they can hold on together in spite of their differences, but now we see more discords between them while he is seriously considering retirement.

The major conflict comes from Robert’s wish to take the seat of the first violinist. Everyone agrees that he is superlative as the second violinist backing up Daniel’s lead performance, but he is not happy with having been No.2 for more than 20 years, and he thinks he should get at least one chance of being the first violinist while they adjust to the upcoming change in their quartet. He becomes angry and petty when his wife does not agree with him, and that leads to one big irreversible mistake at one night.

In case of Daniel, who has been always strict and precise as a professional player, he finds himself becoming a prisoner of passion while spending some time with Alexandra as her temporary mentor. Their feelings are mutual indeed, but it goes without saying that their relationship is pretty inappropriate considering his close relationship with Alexandra’s parents, and that consequently throws another discord into the teamwork in the quartet.

The screenplay by the director Yaron Zilberman and his co-writer Seth Grossman(he is credited as Christopher Ford in the movie) is uneven at times, but it constantly provides small but sensitive moments between its well-drawn characters as their lives keep going on, and the movie also gives several interesting sights in their professional lives as focusing on their small, insulated urban world in Manhattan.

Such a small chamber drama like this movie always depends on the talent of its cast, and it does have fabulous actors. Christopher Walken, who has always been an engaging actor in his movies, effortlessly grips our attention with his weary but distinctive face, and he has a wonderful moment when his character teaches his students about what is really important in their performances. The camera just looks at him talking, but we cannot help but listen to him as he quietly and sincerely tells them his personal episode with Pablo Casals.

Philip Seymour Hoffman and Catherine Keener, who were good in “Capote”(2005), are also well-cast as a frustrated man and his less-than-perfect wife. Hoffman is masterful in presenting his character’s clumsy passive-aggressive attitude, and Keener is especially good during the hurtful scene where Juliette faces the fact that she has not been a good mother to her resentful daughter. Mark Ivanir is less notable compared to his co-actors, but he holds his place among them with his solid performance, and he brings low-key but smoldering passion to his scenes with Imogen Poots, who also has her own scenes to shine.

I watched “A Late Quartet” early in this year, and I liked it mainly for the performances inside it. During the second viewing at last night, I found its final scene more poignant because my late friend Roger Ebert was no longer around us. Its centerpiece, Beethoven String Quartet No.14 in C sharp minor, Op.131, is played with no pause between its seven movements like our life keeps being continued, but there is always the beginning and the end to every performance, and now Roger’s performance is over. Did he see himself from Walken delivering the final words in the film? I have no idea, but I am glad that his legacy has been continued in spite of some changes and conflicts in his website since his death. Roger, life goes on as you expected – and we are moving on as you hoped.

This entry was posted in Movies and tagged Husband and Wife, Illness, Musician, Parkinson's Disease, Quartet, Romance. Bookmark the permalink.