In short, “Warm Bodies” is a zombie version of Twilight movies. A living girl gets fallen in love with a living dead boy under an unlikely circumstance which is probably only possible in zombie movies(I will go into details later), and many unpleasant aspects we can expect from zombie movies are toned down for their little romance blooming in the post-apocalyptic world. Most of zombies in the movie are not particularly scary, and the movie is not as gory as you expect, and it even kindly warns us before it goes into a little more gruesome mode.

While that may not be a good news for some audiences, the movie is an enjoyable quirky romantic comedy instead. I was a bit disappointed with its softened approach to the zombies and their unsavory daily activities, but the movie is engaging none the less with its humorous moments generated from its odd juxtaposition of two ‘mismatched’ genres. Though it does not bite the story well at times, it is as likable as its rotting but sweet hero, and I was frequently amused during my viewing.

Zombies are usually mindless creatures craving for live human flesh, but ‘R'(Nicholas Hoult) is different from most of his fellow zombies who have been aimlessly plodding around their collapsed world. Although he does not remember how the epidemic began or who he was before infected(he only remembers that his first name began with R), he somehow regains an individual consciousness unlike others. As reflected by his self-aware narration, he can think and muse on his current situation, but his consciousness remains trapped in his biological condition though it gets a little better for him every day. He still craves for live human flesh just like other zombies, and, although he is capable of uttering some words, the daily communication with his best friend ‘M'(Rob Corddry) is mostly the series of growlings exchanged between them.

Meanwhile, the living human beings have been doing what we have seen from other countless zombie movies: defending themselves and killing zombies. Under the command of General Grigio(John Malkovich), they built a big quarantine wall around their safety area, and the trained soldiers sometimes go outside for scouting or scavenging for food.

One of them is Julie(Teresa Palmer), and, while R and other zombies attack her and her colleagues, R feels something special from her – especially after devouring the brain of Julie’s unfortunate boyfriend Perry(Dave Franco). When consuming her ex-boyfriend’s brain tissue, R also absorbs the memories inside it, and that is how he comes to acquire a romantic feeling toward Julie when their eyes are met(should it be called love at first sight or love at first bite?).

It sounds pretty creepy, but the movie stays on its morbidly sincere mode while having a little fun with its Beauty and the zombie tale. R kindly protects Julie from the other zombies, and he takes her into his private place at the airport where he collects many things including vinyl records. Julie is initially afraid of R(well, who wouldn’t be?), but, as she sees R’s clumsy but sensitive gestures(he can turn on a LP player for setting the mood, for example), the romantic feeling between them becomes mutual after few days, and, not so surprisingly, we later have a funny moment which is clearly influenced by “Romeo and Juliet”.

The rest of the story is a standard stuff involving the conflict between two antagonizing groups. General Grigo, who happens to be Julie’s father, is not so pleased about his daughter’s new boyfriend. I must point out that Nicholas Hoult is a pretty handsome living corpse despite deadened eyes and purple veins in grayish skin(and he does not smell much), but the General does not like zombies, so he is willing to shoot R without any hesitation. John Malkovich is wasted in this thankless role, but his presence is surely more interesting than the CGI zombies called ‘boney’, a bunch of skeletal guys who descend to the worse condition than average zombies’ after eating their own flesh. 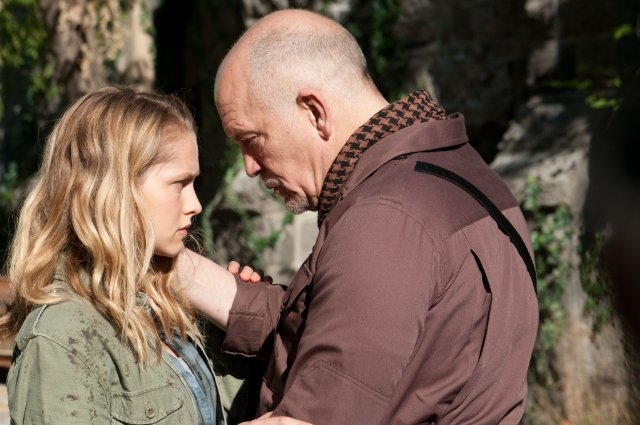 By the way, I know well that discussing the biology in zombie movies is utterly meaningless, but I could not help but think about the biological condition of zombies while the story was mainly told through R’s view. How can the zombies move and control their body even though they are biologically ‘dead’? And how can those degenerated zombies move or jump that fast even though all their bodies have are withered flesh and thin bones?

While there are other notable holes and contrivances in its story, “Warm Bodies” works well as a romantic comedy on the whole, and the director/screenplay writer Jonathan Levine, who previously directed “50/50″(2011), has good actors who know how to walk the line between silliness and sincerity in the story. Nicholas Hoult and Teresa Palmer are well-matched as an odd romantic couple, and they are a lot more interesting to watch than that shiny-skinned vampire boy and his sullen self-absorbed girl in certain vampire romance movies. Analeigh Tipton has some saucy moments as Julie’s best friend, and Rob Corddry provides nicely understated humor to the story as R’s fellow zombie who also experiences changes in his body.

“Warm Bodies” could have been bloodier or funnier or edgier than its PG-13 rating allows(I heard that the movie is milder than Isaac Marion’s novel it is based on), but it is a sweet little comedy with enough wits and humor to amuse us. It is not as funny as “Shaun of the Dead”(2004) or “Zombieland”(2009), but I had a nice time with it and I could forgive most of its shortcomings to some degrees. You may complain that the zombies in the movie are not scary enough, but, you know, zombies are usually not so scary in most cases, and I think they function well as the comic background of the movie. Besides, isn’t it nice to see that their dead hearts can be revived through human emotion?

This entry was posted in Movies and tagged Comedy, Romance, Zombie. Bookmark the permalink.