Paul Thomas Anderson’s “The Master” has every potential for greatness it can get. However, while it seems to reach for something great and sublime, this ambitious film is oddly distant and enigmatic. Its every element comprising itself is fascinating and compelling, and my curiosity was always held by its austere confidence till its ‘resolution’, but, frankly, I do not have much to talk about what it really tries to tell to us even though I can say about how much it intrigued me during my viewing

Anyway, the movie has two very interesting characters at the center of its story, who may deserve a story less opaque than the movie. First, we are introduced to Freddie Quell(Joaquin Phoenix), a navy man who is clearly a deeply troubled man struggling with his personal demons inside him. It is almost near the end of World War II, and how he spends his last days in service on the Pacific Ocean is bizarre to say the least. When the end of the War is announced, he quickly goes down to the bottom of the ship, and he drains fuel from the torpedoes for making his special cocktail. It looks harmful to drink, but I guess it tastes good for him and, probably, his fellow sailors. He also seems to be a man with sexual perversion, and we see him doing some weird masturbatory act with a sand sculpture of a naked woman made by his shipmates on the beach at one point.

Was he twisted like that from the beginning, or was he damaged by his experience during the war? The movie has no answer, and we come to know that Quell is not a reliable person in case of telling the facts about himself, but Joaquin Phoenix’s remarkably committed performance makes Quell an intriguing guy to observe. With his hunched back and awkward mannerisms including a lopsided smile, Phoenix transforms his caricature character into a darkly fascinating walking mess who keeps asking for troubles as being fueled by his dark nature. 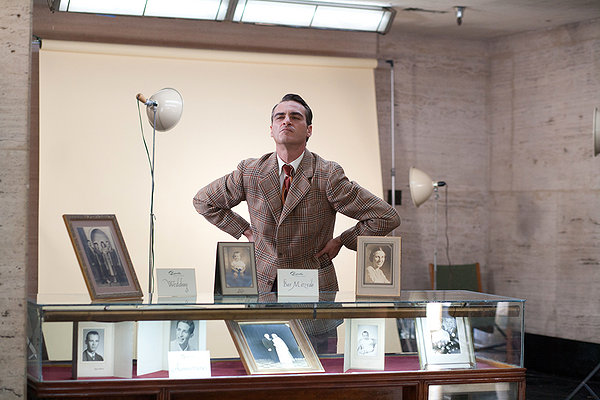 After returning to his country, Quell works for a while as a clerk in a department store and then, after being fired due to a violent incident with one customer, we see him working with immigrant workers on some cabbage field in California. He keeps experimenting with his special cocktails, and he even uses paint thinner at one point. I have no idea about what constitutes his latest brand of cocktail, but it causes a serious trouble when one immigrant worker gets very sick because of that, so he has to run away for not getting caught.

That is how he meets Lancaster Dodd(Philip Seymour Hoffman), the leader of the religious group called ‘The Cause’. When Quell is found as a stowaway in Dodd’s ship which departs from San Francisco and will arrive in New York, Dodd takes a special interest in Quell – and Quell’s intoxicating cocktail. Persuaded by Dodd, Quell goes along with Dodd and Dodd’s family and supporters, and he gets slowly acquainted with the religious activities of the Cause including the hypnosis sessions and the personal interviews for his followers.

What does Dodd believe? And what exactly does he preaches to his followers? Some said Dodd’s religion and philosophy are the fictional counterpart of L. Ron Hubbard’s Scientology, but I doubt whether I will discover new things from the scenes involving the Cause through some basic knowledge about Scientology. Although it is engrossing to observe them, the purposes behind their rituals are not explained much in the film. We see Dodd talking about some vague concepts of reincarnation in our space, but the movie does not go deep into what he ‘believes’. 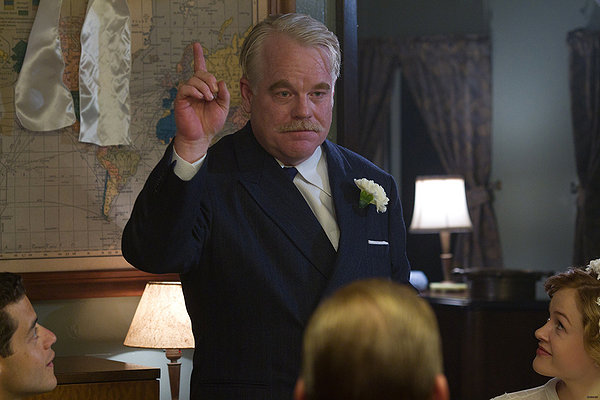 That is why Philip Seymour Hoffman’s subtle but magnetic performance is as crucial as his co-actor’s performance in the movie. Behind Dodd’s gentle and civil behaviors occasionally disrupted by sudden outbursts, Hoffman ably suggests the persuasive power of a charismatic cult leader(his introduction to Quell: “I am a writer, a doctor, a nuclear physicist and a theoretical philosopher. But above all, I am a man, a hopelessly inquisitive man, just like you.”). Regardless of whether he really puts his own faith in what he concocted, Dodd is very good at selling his concocted belief to his followers – and his family. His sunny but firm wife(Amy Adams, who is Oscar-nominated for her icy performance in this film) always stands by her husband as his second-in-command or something more than that. While his son Val(Jesse Plemons) is cynical about his father’s religious practice, their daughter and her new husband willingly believe what he says, and so do his devout followers including a rich supporter like Helen Sullivan(Laura Dern). It can be said that they will stick to their religious belief even if it is no good to them just like Quell sticks to his possibly harmful cocktails.

But can I argue that that’s the main point of the movie? I do not think so, because the movie makes no particular point about Dodd’s religion – or how Quell and Dodd affect each other. It sometimes looks like the movie does nothing more than merely putting its two protagonists together within its plot; sure, it seems they are drawn to each other like two sides of coin, but there is no clear explanation for their attraction. Is it a homosexual attraction? Or is it just a psychological attraction between a man in the search for direction and salvation and a man in the need of challenge and satisfaction? Or is it the attraction not that different from the one we observed from J.J. Hunsecker and Sidney Falco in “Sweet Smell of Success”(1957)? All I can know is, their attraction eventually turns out to be not as strong as we assumed at first.

The performances and the technical aspects in the movie remain absorbing in spite of many unanswered questions rising from its austere elusiveness. Although there is less synergy between them on the screen than expected, Phoenix and Hoffman deservedly received Oscar-nominations for their terrific performances, and they won the Best Actor award together at the Venice Film Festival in the last year(the movie also received the Best Director award for Anderson). How they dynamically interact during one memorable scene involving the special interview termed “The Processing” is nothing short of gripping; although the camera mostly focuses on Phoenix’s face from behind Hoffman’s back, two talented actors does a masterful job of suggesting something beneath their interactions which look mundane and casual at first but become increasingly intense.

The director/writer Paul Thomas Anderson, who shot this movie in 65mm film with his cinematographer Mihai Malaimare Jr., keeps providing us impressive moments to talk about. Its precise symmetric scene composition and its slow pace are reminiscent of Stanley Kubrick’s later films, and the production design by David Crank and Jack Fisk is a vivid recreation of the American society during the post-World war II era, and Jonny Greenwood’s score adds another layer of ambiguity and disturbance on the screen.

So, what is the movie about? I still cannot answer well, and that is where my reservation toward this film comes from. Anderson’s previous film “There Will Be Blood”(2007) also has its own enigma at its center, but it is a character study forcefully driven by Daniel Day-Lewis’ overpowering performance until it directly declares its end after drinking all the milkshake it can pump up from its story, and we get some considerable insights on its unlikable but miserable hero who might have been destined to his harrowing journey of greed and ambition from the very beginning.

In case of “The Master”, I was involved as observing the behaviors of its two interesting characters, but I remained baffled about them and other things because it looked like nothing much was changed in the end in spite of all the struggles between them. There are surely clashes, and there are also reconciliations, but what do these two guys learn or get from getting along with each other for a while?

People have talked a lot about the scene in which Dodd and Quell and others go to some desert plain in Arizona. Dodd rides a motorcycle at high speed across the desert to some point around the horizon and then he comes back. And he says it is Quell’s turn, so Quell rides the motorcycle to the opposite point but he does not return, so Dodd and others tries to find him without any faintest idea about where Quell is. This vast scene is surely wonderful to look on the big screen, but please don’t ask me about the meaning behind this seemingly meaningless moment.

Despite my grumbles, my admiration for Anderson continued to grow even when my head tried to grasp what “The Master” was about. I do not agree with others who thought the movie is a masterpiece, but this is a baffling but interesting cinematic Rorschach test worthy of discussions and re-evaluation, and, at least, it is not a tedious experience even though the sum of its brilliant parts seems to be less equal than its whole part.

Anderson quickly established his exceptional career with his first three movies(“Hard Eight”(1996), “Boogie Nights”(1997), and “Magnolia”(1999)), and what he accomplished in these three films and following quirky romantic comedy “Punch-Drunk Love”(2002) was pretty enough to call him a master director, if not a great director. With “There Will Be Blood” and “The Master”, Anderson shows more ambition, confidence, and control for the next stage he is determined to take, and now here comes another question I cannot answer either: what will be the next step for him?

This entry was posted in Movies and tagged Cult, Mental Illness, Religion, Sailor. Bookmark the permalink.