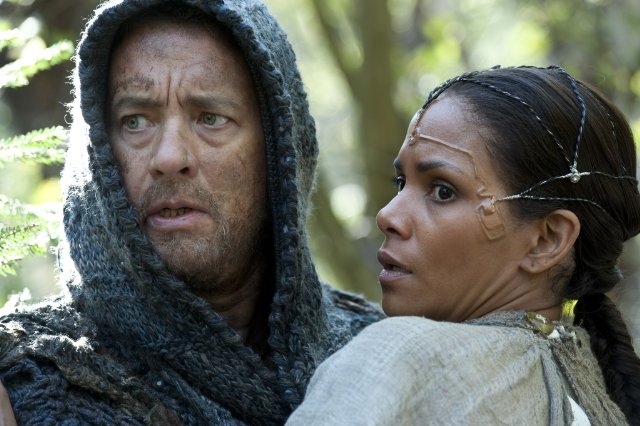 “Cloud Atlas” is something you do not often encounter at theater: an ambitiously epic folly which will dazzle or bore you at the big screening room. Though I am not entirely sure about my opinion on this giant messy tapestry, but I have to admit that the movie is a dizzy and enthralling kaleidoscope constantly and sweatily shuffling its good parts and bad parts to make some big, profound statement about humanity and the vast dimensions of time and space encompassing it.

As reflected by a symphony composed by one of many, many characters in the film, the movie is a giant symphony consisting of six elements rolling and clashing with each other across the time and the space. First, we meet a young American lawyer on a business trip associated with his father-in-law’s lucrative business during 1849; while he gets sick during his voyage across the Pacific Ocean, he gets acquainted with a stowaway from the island he visited, and their growing relationship will affect this young lawyer’s life forever. And then we meet a young British homosexual composer in 1936, who tries to find a breakthrough in his career through assisting a respectable aging composer living in Edinburgh; he finally finds what he has been looking for while doing his job as demanded, but there is a big cost for protecting his masterpiece. We also meet a young gossip magazine reporter living in San Francisco in 1973; she has yearned for a better thing in her career, and now she gets it – but it may cost her life if she is not careful enough. 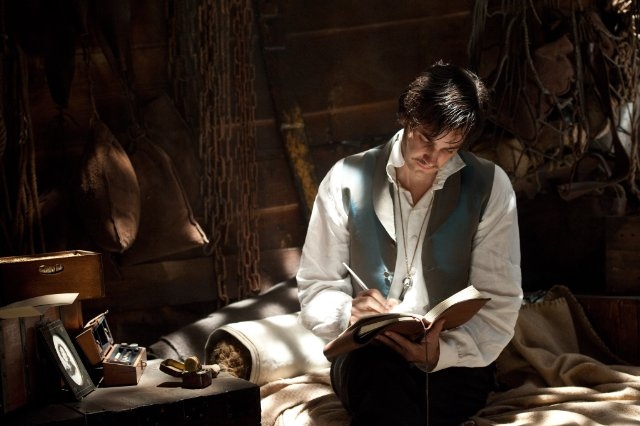 The movie also looks at our present and future as far as it looks back at our past. In 2012, we meet an old publisher who comes across a sudden unexpected chance which gets him lots of money, and then gets him blackmailed by thugs, and then gets him locked up in the facility for aging people. In 2144, a female refabricant, a new word for clone, gets a lucky opportunity for the escape from her oppressive system in Neo-Seoul; her adventurous quest with knowledge leads to her rebellion against the system, and her attempt may be not that futile although she is now waiting for her execution. In 2346, everything in the human civilization is now collapsed after ‘The Fall’; the Earth has been becoming more poisonous place day by day although it does not look bad for living on the surface, and the future of the remaining humanity on the Earth depends on two people far different from each other.

The movie spreads these six different storylines in front of you, and then it simultaneously drives them together in a style reminiscent of D.W. Griffith’s classic silent epic “Intolerance”(1916). This process will be pretty baffling to you; what is the common point between these six stories looking so different from each other? What is the connection between an old-fashioned voyage drama in the 19th Century and a modern urban thriller in the 20th century? Or how a SF drama in the glorious 22th century can be linked to a small comic struggle in our mundane world of the 21th century?

Like David Mitchell’s epic post-modern novel the movie is based on, the movie gradually reveals its various themes as each of its plots gets thickened. Mitchell’s novel has been regarded as an excellent but ‘unfilmable’ book due to its complex narrative structure connecting its six stories, and the directors/writers Lana and Andy Wachowski and Tom Tykwer tried a bold attempt during their hefty adaptation process; not only they modified the stories, but also they deconstructed and reconstructed the whole structure in the book for their movie.

The end product is more chaotic than the book, but we come to recognize the common themes associated with the human history here and there as each story moves around alone or they are played together in their epic canvass. As soon as we are disgusted by the heartless exploitation through slavery in the 19th century, we see a murderously opportunistic side of modern capitalism, and then we also observe the inhuman cruelty supported by advanced technology. Regardless of time and space, oppression, exploitation, savagery, and other dark sides of human nature have been always with us since our ancestors evolved, and they still remain even at the final chapter of the human civilization on the Earth, as represented by the devil tempting one character in the movie.

While chillingly reminding us that our inherent flaws will keep driving us into mayhems and destructions in the future like they have done throughout the human history, the movie also reminds us that how much we are capable of goodness in spite of our unpleasant sides. We can help each other when facing the oppression determined to crush our spirits. We can do the right thing even if we can choose to ignore injustice. We can accomplish something good which may last against all odds. And we can show love and empathy to someone different from us.

All its subjects and themes are juggled compellingly in the movie even though they feel hallow and vapid frequently, and it was sort of fun to watch that process. Not all of the elements are good, but how they dance together to the very end is enjoyable to watch, and the movie are visually marvelous as it moves around different locations and times; even when you are lost in the middle of the movie, at least you always know where you are thanks to the distinctive moods established in each story. 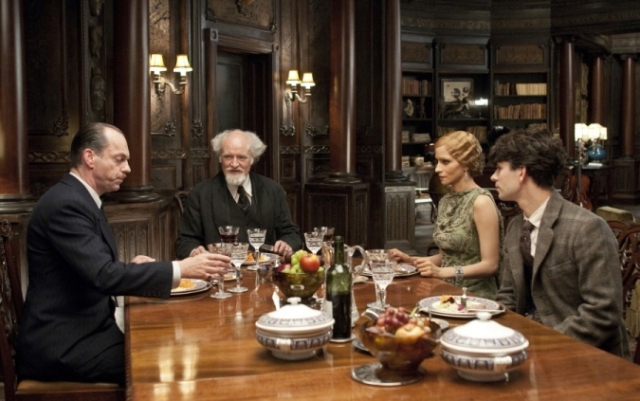 And there is its daring presentation of actors wearing various make-ups, which are superlative at times but pretty awful in other cases. One of the recurring themes in the movie is reincarnation, and, for emphasizing that aspect, the directors made their actors take various roles throughout the stories and decorated them with a wide array of make-ups. This approach reminds me of the ‘storyline’ of James Joyce’s impenetrable “Finnegans Wake”, in which its hero and other main characters are transformed or transmuted throughout their story which probably reflects the cycling nature of the human history.

Like the movie itself, this daring attempt is half-success and half-failure. During the end credit, the movie shows us how many characters are played by each of its actors, and you will certainly be surprised in case of Ben Whishaw or Hugh Grant or Susan Sarandon because you cannot recognize some of the characters played by them unless you look at them closely. In contrast, we can help but laugh when Tom Hanks appears with tanned skin and bad accent or when Hugo Weaving appears as a drag queen version of Nurse Ratched or when Caucasian actors awkwardly appear as Asian/Korean characters.

As one of the Asian audiences, I must say I was kept being distracted/disturbed by the problematic make-ups I saw during the Neo-Seoul story. As Asian/Korean characters, Jim Sturgess, Hugo Weaving, Hugh Grant, Jim Broadbent, Halle Berry, and James D’Arcy look as if they were the love children of the racist Asian stereotypes in old Hollywood movies and Mr. Spock in “Star Trek”. I appreciated that the directors included bits of Koreans into their movie, but, boy, it is quite clear from the first appearance of Neo-Seoul that they do not know much about Korea just like David Mitchell was pretty ignorant about Korea when he wrote his novel. Seriously, it would have far less awkward it had been Neo-Tokyo – or Neo-Shanghai, perhaps. 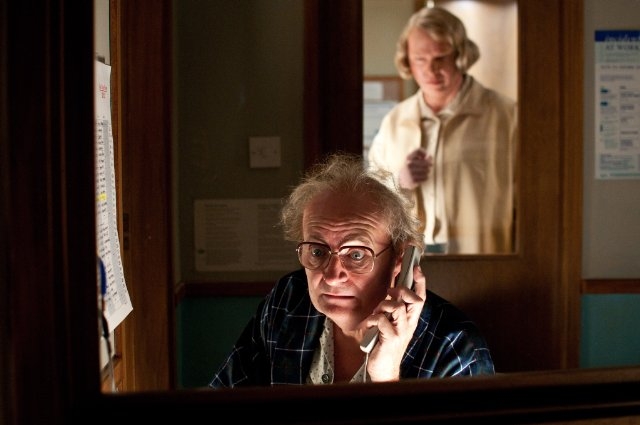 Despite my many grumbles about its shallowness and awkwardness, the movie manages to make itself work as an oddly interesting experience as it diligently rotates between its strong points and weak points. Like the movie, the actors all have their strong parts and weak parts, and the undeniable failure inside the movie is well reflected by an ironical fact that the actors are usually at their best when they wear less make-ups in the movie. Jim Sturgess looks pretty creepy as a Korean character, but he feels appropriate when he is in England or Scotland. Jim Broadbent is your guy when you need someone to play a cranky old man, and he provides lots of pleasures through some of his more fitting roles, and Halle Berry is good when she stays close to her real appearance. Even when he looks awkward, Hugo Weaving does not lose the sense of humor at all while he moves around the movie as its main villains, and Bae Doo-na provides the considerable amount of emotions to her character’s tragic but somewhat hopeful story as a clone opening her eyes to knowledge and feelings; her graceful performance is one of the main reasons I forgive David Mitchell and the directors’ faults a bit.

As I tried to sort out my myriad contradictory feelings and thoughts on “Cloud Atlas”, I concluded that the movie is “the best mess of 2012”. Some parts are really fantastic while other parts are utterly terrible. I want to admire it for its ambitious vision, but I also want to scorch it for its confounding mess. The movie is flawed and imperfect from the start to the end, and it is no wonder that the movie has been a love-it/hate-it film since its release. I do not think it is one of the best films in 2012 as some claimed, but its daring attempt is rather admirable even when it brandishes its worst side to the audiences. This big folly is surely a rare visual experience too interesting to be missed – even if its ultimate lesson is that life is full of make-ups.