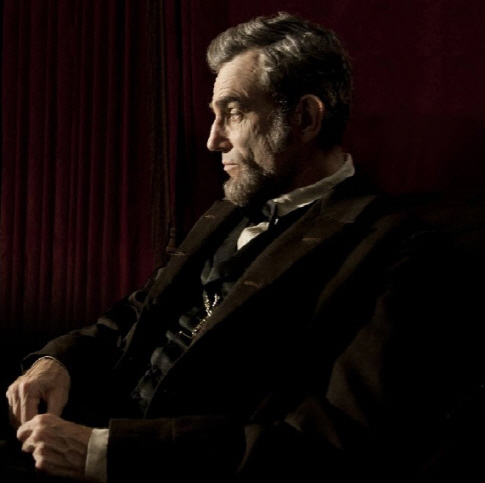 During my childhood, I came across several sets of biographies of the famous historical figures for elementary school/kindergarten children, and Abraham Lincoln’s biography was a sort of obligatory volume in these sets like Jesus’ or Einstein’s was. Except nice illustrations, these biographies on Lincoln were not that good as far as I remember(I wonder… did Lincoln really start growing beard after reading a letter from a little girl?), but at least they gave my immature mind some basic historical knowledge about Lincoln, his era, and his great achievements.

While presenting its subject with utmost respect and admiration, Steven Spielberg’s “Lincoln” presents a complex portrayal of a brilliant politician which is far more interesting and informative than the simple biographies of my childhood. It only focuses on the last year of Lincoln’s life, but Lincoln in the movie is vividly presented to us as a three-dimensional human being, and, through a very compelling mix of political thriller and historical drama, we come to learn that the final months of the Civil War were as important and difficult to him and his country as the Battle of Gettysburg was. As the brief opening scene on the battlefield suggests, Lincoln will have to fight and advance across muddy political world for attaining his ultimate goal and leading his country to changes – and he is willing to win his political battle by any means necessary.

It is January 1865, and the Civil War is approaching to the end after the major victory of the Union at the Battle of Gettysburg. Being successfully re-elected as the president in the last year, Lincoln(Daniel Day-Lewis) sees that a small but timely chance for passing the 13th Amendment to the US Constitutions. Although he issued the Emancipation Proclamation two years ago, Lincoln shrewdly perceives that it will not have any legal power once the war is over because it is not a federal law passed by Congress. They will certainly win the war, but the returning Confederate states will certainly disregard the Emancipation Proclamation, and that’s why the 13th Amendment should be enacted as a federal law for banning slavery completely in the country; if it is passed at the US House of representative before the end of the war, they can legally enforce it to the returning Confederate states later. 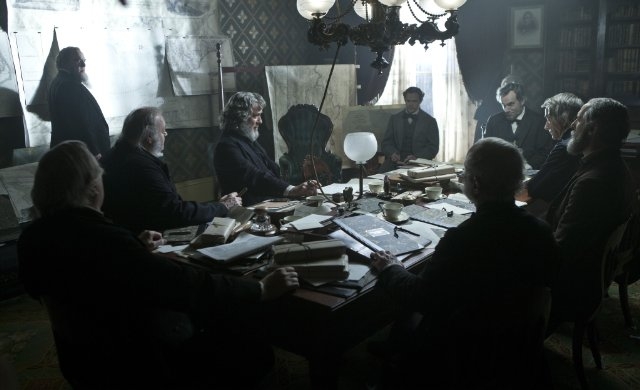 But the political circumstance in Washington D.C. is rather tricky for Lincoln and his dependable cabinet members including the Secretary of State William Seward(ever-reliable David Strathairn). While most of the Democratic Party members in the US House of Representatives are going through lame duck phase due to their failure to be re-elected in the last year, the Democratic Party still remains as a major block to the 13th Amendment; even if Lincoln unites all Republican Congressmen, he still need to draw additional 20 votes from the Democratic Party for getting it passed at the House. Furthermore, he also must maintain a fragile but crucial balance within his party between the conservative faction represented by Preston Blair(Hal Holbrook), who wants the peace negotiation with the Confederate for the immediate end of the Civil war, and the progressive faction represented by Congressman Thaddeus Stevens(Tommy Lee Jones), who has been adamantly passionate about the abolishment of slavery for long years.

Although we know his mission will be accomplished in the end, how Lincoln and his men pull all strings they can get for moving their political system is entertaining to watch because there are many universal aspects we can instantly recognize as we observe the people in the movie talking or negotiating with each other. Now or then, the political system has been mainly driven by petty human interests rather than lofty ideals, and the movie amusingly reminds us that the people in the politics are seldom changed. Lincoln allows Seward to hire three agents, or ‘lobbyists’, and, mainly functioning as a trio of comic reliefs for lightening up the somber mood in the story, these agents(played by James Spader, Tim Blake Nelson, and John Hawkes) are ready to do some dirty jobs for getting votes from Democratic Congressmen – including tasty bribery or irresistible offer of federal jobs. 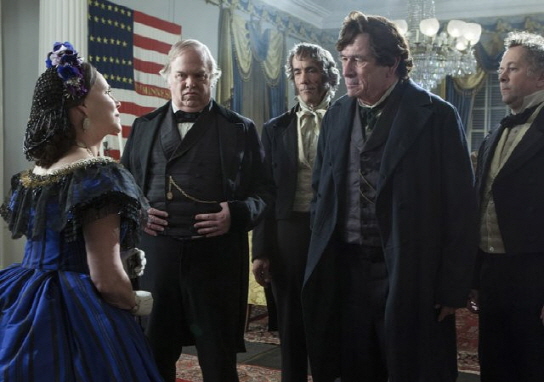 The movie is surely very talky, and there are many moments of conversations and oratories throughout the movie, but Tony Kushner’s terrific screenplay, based on the non-fiction book “Team of Rivals: The Political Genius of Abraham Lincoln” by Doris Kearns Goodwin, shines with eloquence and passion as it deftly moves our attention around the complicated and formidable political mechanism inside Washington D.C at that time. It is as solemn and serious as history drama can be, but it is also smart and humorous as any good political drama should be. Lincoln usually draws the attention of the people around him with stories and anecdotes before eloquently expressing his thoughts through long speeches, but he also knows how to tell a bathroom joke to draw big laughs from his men if he wants to lighten up the mood in their room a bit.

In contrast to the blatant but effective sentimental approach in his previous work “War Horse”(2011), Steven Spielberg takes a calm, restrained approach to Kushner’s screenplay while making the drama and its background feel vivid and real, and we are effortlessly drawn to the world in the past where the voting right for black people was a rather unfavorable radical idea and the White House was more opened to people. The movie mainly revolves around the shady interior scenes where most of the crucial interactions between the characters happen, the cinematographer Janusz Kaminski imbues gray/brownish wintry ambience to them using the cold winter lights from outside and the orange lights from fireplaces and lamplights, and the result is somberly beautiful to look at. The production design and costume are first-rate to say the least, and John Williams’ stately score seldom steps out to the front while subtly conveying the historical significance of the story to the audiences in the background.

There have been lots of Oscar buzz about Daniel Day-Lewis during this Oscar season, and, considering his masterful performance in this film, I won’t be surprised if he wins his third Best Actor Oscar. Compared to his aggressive turns in “Gangs of New York”(2002) and “There Will Be Blood”(2007), Day-Lewis is far less showy here, but he gives an equally grand performance bountiful with fine human details to be appreciated. He is not just playing Lincoln on the screen; he wholly embodies Lincoln as a complex human being with many different sides, and we immediately accept him as Lincoln right from his first appearance. 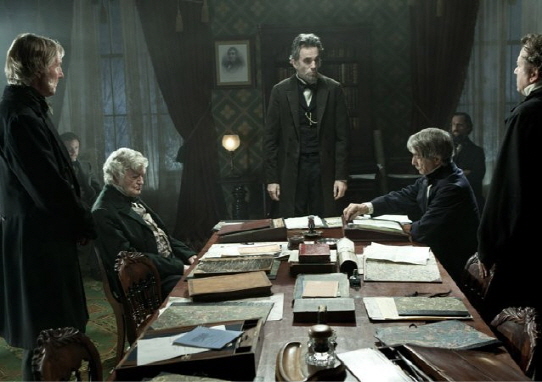 While not being far from Lincoln’s familiar historical image on the surface, Day-Lewis’s dexterous portrayal of Lincoln is intimate and intelligent, and it reveals not only a saintly man getting exhausted by the personal and political burdens but also a wily politician with immense insights on how the system and its people can be moved or manipulated. In spite of being weary due to the costly war which has been demanding a lot from him and his people and being haunted by the dark memories associated the death of one of his sons, he quietly moves on with dignity and calculation as handling the small and big matters thrown to him day by day, and we gradually see the steely resolve behind his mild mannerisms and soft-spoken words.

Spielberg assembles an impressive array of talented actors around Day-Lewis, and their superlative ensemble performance is one of the best ones in 2012. Even the small roles are filled by good actors like Michael Stuhlbarg, Bruce McGill, Lee Pace, Jackie Earle Haley, Walton Goggins, and Jared Harris, and the ensemble is pleasure to watch for providing different flavors and views to the story.

Sally Field plays Lincoln’s wife Mary Todd Lincoln, and her scenes with Day-Lewis are good private counterpart to Lincoln’s public life. Their son Robert(Joseph Gordon-Levitt) wants to join the army before the war it over, but Mary Todd is against that because she does not want to lose another son. Lincoln should do some negotiation job between them while trying not to hurt the feelings of both, and their conflict is eventually resolved with compromises and sacrifices like his political business 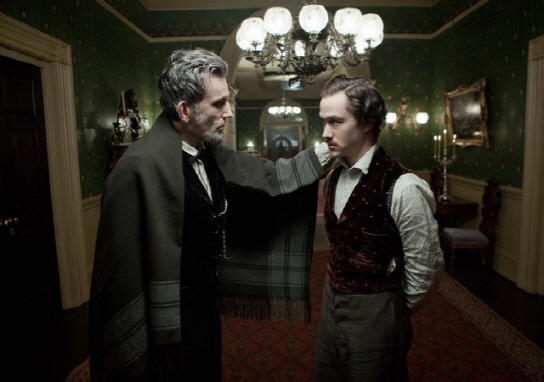 Tommy Lee Jones is also excellent as a seasoned politician with the ideals fueled by a matter of his heart, and he has a quiet but memorable scene with Day-Lewis in which Lincoln and Stevens have a private conversation at the basement of the White House. Despite their differences, they agree on what should be done for their country, and, as a pragmatic realist, Lincoln advises Stevens that he should compromise his principles for reaching to their common goal. Stevens comes to admit that there is nothing he cannot say for what both he and Lincoln sincerely want, so he rises to the occasion with a neutral but effective blow to his sniggering opponent at the House; “I don’t hold with equality in all things, only with equality before the law and nothing more.”

While it is one of the best works by Steven Spielberg, “Lincoln” is a fabulous historical drama to be remembered as the definite movie about Abraham Lincoln and his major accomplishment. Though the ending is not a surprise to you if you did not sleep during American history class, the movie is a gripping story which rarely becomes tedious during its long running time(150-min), and it is especially suspenseful during a long but tense sequence in which the fate of the 13th Amendment is being determined at the house as the congressmen in the House say aye or no one by one.

As several critics have already pointed out, the last 5 minutes of the movie is unnecessary, but it manages to maintain its restrained attitude even during that overkill at least, and the movie made me reflect on how that small but significant legal change initiated by a great American politician was followed by far bigger social changes during less than 150 years – and we witnessed one of them recently. 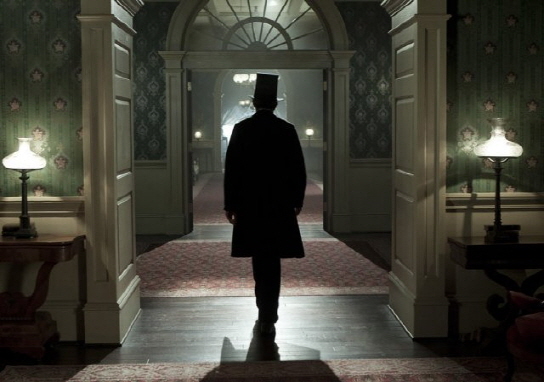