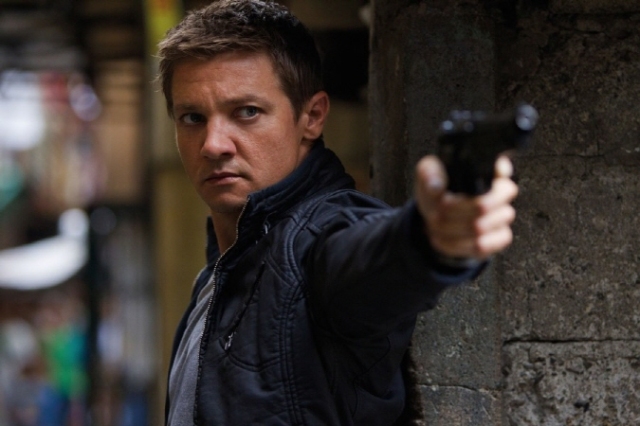 One major problem of “The Bourne Legacy” is that the movie is not so much about Jason Bourne, whose precarious quest for his identity was well told and shown in three previous films “The Bourne Identity”(2002), “The Bourne Supremacy”(2004), and “The Bourne Ultimatum”(2007). This time, he is only mentioned from time to time while never shown in the movie, and we instead get another story about another super-agent chased by the organization he has been working for. The result is at least watchable, but this well-made action film ultimately feels bland and hollow compared to its predecessors as it constantly reminds us of the absence of its titular hero.

Its story starts around while the major events described in “Bourne Ultimatum”, the best film of the series, are happening on the other side. Many high-ranking officials at CIA become worried about the possible disclosure of their secret programs due to the troubles caused by Jason Bourne, and they are determined to do anything to cover their secrets before it is too late. While we see the familiar actors from previous movies including David Strathairn, Joan Allen, Albert Finney, and Scott Glenn, we also meet the other new important figures including Mark Turso(Stacy Keach) and Eric Byer(Edward Norton).

As usual, we get that familiar sight of a big room filled with agents and monitors, where Byer keeps receiving informations from outside while leading his team for a massive cover-up job. For some reason I did not understand very well, he decides that they should shut down the other projects connected with the project involved with Bourne, so they start cleaning everything – including the people associated with them. 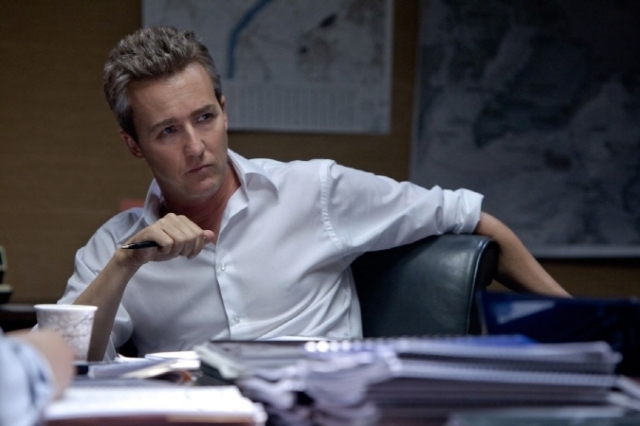 One of them is Aaron Cross(Jeremy Renner), who has no idea about what is happening outside while going through his training session alone somewhere in the remote area in Alaska. During the scene when he gets in trouble with a pack of wolves, I could not help but think of “The Grey”(2011), and Renner’s nice physical performance with considerable intensity shows that he could have been a competent alternative to Liam Neeson in that frightening movie about the men chased by wolves in the wilderness of Alaska.

As a participant of the special project, Cross has enhanced physical ability and equally enhanced intelligence, so we see him jump into a cold pool to retrieve something at its bottom(don’t ask me what that is) or leap from a cliff to land on the other side while trying to get to a certain cabin in the woods in a short time. That depends on two pills he regularly takes(one is green, and the other is blue), and now, after realizing that his agency wants to eliminate him just like others, he needs more drugs to keep him on, well, a smarter and faster mode for his survival.

Searching for the chance to get his drugs, he gets the help from Dr. Marta Shearing(Rachel Weisz), who managed to survive a shocking incident at her workplace(how that was initiated is a rather unclear thing) and then finds herself running away with Cross from the people chasing after them. Fortunately for Cross, she is a talented and knowledgeable scientist(As she said, she could have had a more comfortable and rewarding career instead of working with many secrets), and she has a solution for his drug problem; it only takes a shot of a carrier virus to release him from his dependence on drugs and maintain his enhanced abilities(I am certain that this is another summer movie of this year with which my colleagues at the Biological science department can have many laughs).

The story moves to Manila during its second half because they have to go there to get the virus, and we get an exciting action sequence where the characters jump on the roofs, run along the narrow alleys, and ride motorcycles as they attempt to evade the police. The director/writer Tony Gilroy, who wrote the screenplay for the previous Bourne movies, handles well this climatic sequence and other action scenes in the movie. The actions on the screen are thrilling, and I could see that Renner and Weisz really put themselves in some of them. Though her character is mainly a functional role, Weisz gives a credible performance amidst these frantic action scenes surrounding her.

But the story did not hold my interest much. Above all, Cross is a less interesting character than Jason Bourne. Unlike Bourne, he clearly knows who he was as well as who he is, so his story becomes less compelling than Bourne’s desperate drama even though he also has to run for his life. Renner, who showed us that he can be an excellent action hero in “Mission Impossible: Ghost Protocol”(2011) does everything he can do for his character, but there are not many things available for him to play from the beginning. The movie plods at times around its murky first part while not giving enough information to us for understanding the whole circumstance surrounding its characters, and Bourne’s absence feels more palpable as he is being kept mentioned throughout the film.

“The Bourne Legacy” is not a bad action film when viewed independently, and I was not that bored while enjoying its good contents. However, the problem is, it keeps letting itself being associated with the previous films, and it feels redundant and unnecessary as a consequence. There are several things I appreciated in the film including the good use of the locations(South Korean audiences will be disappointed to see that Seoul does not appear often in the movie), but the hole named Jason Bourne still remains. I do not know whether they will make another sequel as implied during the ending of this film, but maybe they should bring Bourne back in action if they are really going to make it. 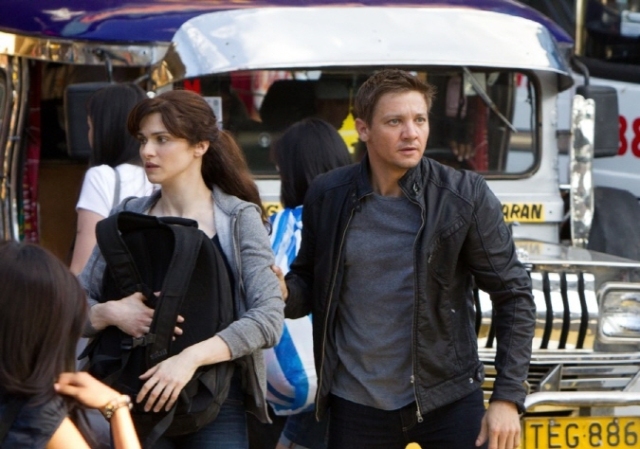 This entry was posted in Movies and tagged action, Espionage, Thriller. Bookmark the permalink.