With his Batman series, Christopher Nolan has pushed the superhero genre to the undiscovered territory we have never expected from the genre before. Now with “The Dark Knight Rises”, a grim, overpowering final chapter of the trilogy, he pushes the genre more to the extreme to find out how much more it still can be pushed – and how much more its hero can still  give to the city he has been trying to protect. I do not think this attempt is entirely successful because of its hurried handling of overwrought plot which leaves many unclear points in the story, but the movie manages to drive us intensively to its climatic third act followed by the satisfying conclusion to its series.

In “Batman Begins”(2005), Nolan showed us how Bruce Wayne(Christian Bale) can be a lot more interesting than before as a brooding conflicted hero who comes to discover the way to deal with his childhood anger as the mysterious powerful vigilante dreaded by the criminals of Gotham city. It had inherent silliness as a superhero movie, but Nolan treated his story with absolute serious realism while subtly recognizing its inherent silliness, and then he went further with that approach to the towering success in “The Dark Knight”(2008), which remains as one of the great achievements in its genre during the last decade.

That movie was not only an exciting superhero movie but also a serious drama associated the problems we have faced in our real life during the post-9/11 era. It vividly shows us how much everyone including Batman is emotionally shaken and then cornered into impossible situations by the sheer chaos represented by Joker, played by late Heath Ledger who got a posthumous Oscar for his utterly unforgettable performance. Batman makes hard choices while coping with the unpredictable anarchy hurled at him and others, and, in the end, he ultimately sacrifices his reputation for making Gotham city into a better place where the people do not need Batman any more as he has wanted.

When we see Gotham city again in “The Dark Knight Rises”, it seems his sacrifice has helped help the city a lot during the last 8 years – at least on the surface. Because Batman took all the blames for the district attorney Harvey Dent’s crimes and death in the previous film, Dent becomes the fallen hero of Gotham city, and there is no more organized crime in Gotham city thanks to a newly legislated criminal law called Harvey Dent Act. The commissioner Jim Gordon(Gary Oldman), who was Batman’s closest ally, has been feeling guilty and regretful about the lie maintaining the law and order of his city, but he knows the cost of the truth, so he chooses to keep being silent about it.

Meanwhile, still feeling bitter about the death of Rachel Dawes 8 years ago, Wayne is no longer active as Batman, and he has no interest in playing a billionaire playboy either. Having recently lost a considerable part of his vast fortune due to the investment on the clean energy development project in his company, he becomes a depressed recluse living with many physical injuries from his tough night life in the past, and that saddens his loyal butler Alfred (Michael Caine), who has always wanted his master to lead a normal happy life out of his troubled personal crusade someday.

Wayne thinks he is at the bottom, but the storm is coming to Gotham city, and soon he discovers what the real bottom really is through the clash with his new adversary named Bane(almost unrecognizable Tom Hardy with bulked-up physique), a formidable mercenary always wearing a gas mask on his face providing the anesthetic to alleviate his severe chronic pain. With his robotic voice and masked face, Bane is far less colorful than the Joker, but Hardy does the best he can do in his limits to exude the palpable presence of the unstoppable brutal force singled-mindedly determined to pulverize Gotham city into ashes, although that makes his character less interesting than the Joker. In Joker’s view, Gotham city is a toy set to be terrified, tormented, and burned for his sadistic fun; in Bane’s view, Gotham city is a sin city to be intimidated, demolished, and ground for his fanatic belief. Guess which is more fun to watch and which is worse to Gotham city.

The movie starts to increase its tension level after Bane unleashes his ruthless brutality on Gotham city and its citizens as he has prepared with his henchmen below the city. He raids the stock trade market at the center of the city, and then he commits a spectacularly horrifying terror at the football stadium as the beginning of his reign of chaotic terror on the city. The movie has several interesting sights which will probably remind you of the French Revolution; the incarcerated criminals break out of their prison with weapons in their hand, and the upper class people are attacked by the angry mob and then dragged to a deranged kangaroo court presided by one familiar villain character in the series, where they are sentenced to death or exile(there is not much difference between them, by the way).

So many other things happen in the movie besides these happenings I describe above, and there are also many new characters moving around in the hectic story along with the familiar characters including Alfred, Gordon, and Lucius Fox(Morgan Freeman), who again provides Batman the new equipments for his battle. We have a young honest cop named John Blake(earnest Joseph Gordon-Levitt), and then there are two women entering Wayne’s lonely miserable life; Miranda Tate(Marion Cotillard) is a board member of Wayne’s company who wants to help him, and Selina Kyle(Anne Hathaway) is a cat bugler who attracts his attention after when she infiltrates into Wayne’s manor to steal one of his jewelries. While Tate benevolently approaches to a man who was once the most popular bachelor in Gotham city, Wayne is drawn to Kyle’s slick sexiness, which Hathaway gamely supplies while having a lively fun as a criminal yearning for a new start in her shabby life. 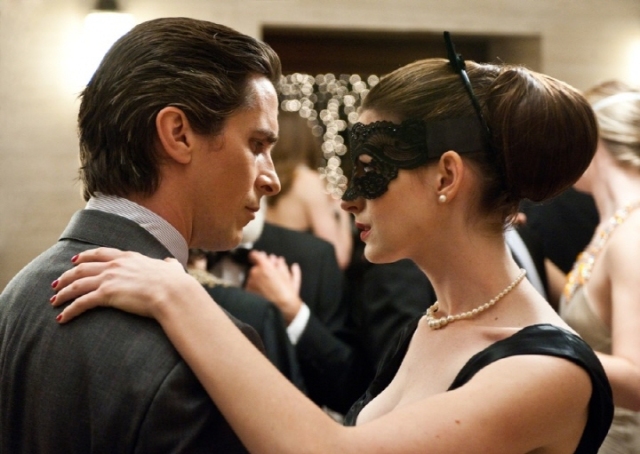 Overstuffed with many characters and lots of incidents, the movie feels ponderous at times, but it rarely slows its pace throughout its long running time. Though I was not bored at all because of its rapid pacing, but too many things quickly happen during 160 minutes, and the storyline and the motives of the characters are frequently murky or inconsistent as a result. As a matter fact, you will be quite disappointed if you expect Batman appearing more than before in this film, because Batman is on the verge of becoming a supporting character while others are hurled or swept into an epic social maelstrom swallowing the whole city. In the middle of the movie, we see Wayne helplessly locked in an ancient prison somewhere near Jodhpur, Rajasthan, India where no one except one guy has ever escaped from, and he has to endure the physical/mental punishment for interfering with Bane’s plan while Gordon and Blake and other policemen have to defend the city for themselves and others in the city without Batman.

On the whole, “The Dark Knight Rises” is not as impressive or exciting as the previous films because of its oppressive gloominess mercilessly pressuring on its characters and their world with little exhilaration, but I admire how Nolan tests his genre for its endurance for his serious realism. Except when it is really necessary to use CGI, Nolan makes the actions in his movie look as real as possible with his reliable crews, and we get several good action scenes including the sensational opening sequence where Bane escapes from a plane about to crash. While I was not that particularly excited and surprised for the most of its running time, I was entertained because the movie never loses its control even when it gets lost in its plot for a while, and its third act feels gritty, tense, and real enough for me to care about the story. Forcefully pushing itself to its endurance limits, the movie feels very close to our real world and the problems we are dealing with, though I must say that it does not succeed well in reaching to something equivalent to that thought-provoking ambiguity between good and evil in “The Dark Knight” while spending most of its time with the simple but imminent matter of survival and death.

Despite my heavy reservation toward it, I think “The Dark Knight Rises” is recommendable as a part of the series which has made most of the other superhero films look like frivolous forgettable entertainment. Nolan climbs down the peak where he climbed up, but he does it admirably with the fitting conclusion his hero deserves in the end, and his remarkable trilogy will remain as the golden standard for other comic book movies to come in the future.

Sidenote: The movie can be enhanced by more running time, but we all know Nolan is one of the last directors from whom you can expect the director’s cut.

This entry was posted in Movies and tagged Superhero. Bookmark the permalink.