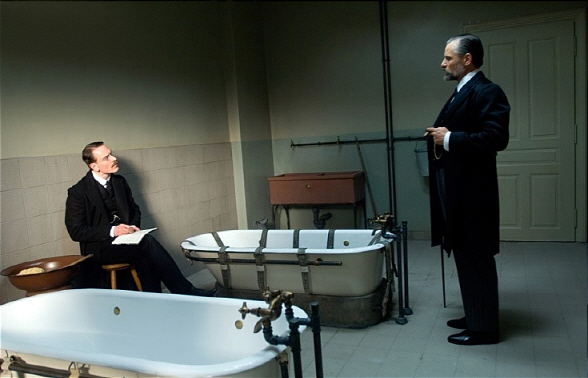 The characters in “A Dangerous Method” talk, listen, discuss, disagree, and argue during the most of its running time, and they are very serious about what they deal with. The movie is surely a talky period drama, but it is not as ponderous as you think, and it is a intriguing and intellectual drama about the early age of psychoanalysis represented by the two influential pioneers of the field – and the woman who happened to be academically associated with both of them.

The story opens with one unstable patient being sent to the mental institution in Switzerland in 1904. Her name is Sabrina Spielrein(Keira Knightley), and her extreme behaviors apparently show that she is suffering from the severe case of hysteria. Dr. Carl Jung(Michael Fassbender) takes an interest in her, and he thinks her case can be a good subject of the clinical study for supporting the theory recently proposed by Dr. Sigmund Freud(Viggo Mortensen),

What we see through Jung’s trial is the interesting presentation of basic psychoanalytic methods in early stages, which is essentially not so different from what the analysts of our era do. While they are alone in the room, he lets Spielrein talk about her past experience, and he attentively listens to her while sitting behind her. They also have some privation conversation while she is relatively relaxed and comfortable.

Regardless of how you think about psychoanalysis or how much it has been helpful to the scientific understanding of the human mind, it certainly helps talk more openly about the inner problems inside us. Jung’s trial is very successful; he discovers the Freudian origin of Spielrein’s hysteria, and then Spielrein gets recovered enough to start studying, ironically, psychoanalysis in the college for getting her doctoral degree.

And, through this success, Jung gets acquainted with Freud. As the first pioneer of his field, Freud regards Jung as the heir apparent to his psychoanalytic theory, but, though he enjoys the lengthy conversation about the interpretation of dreams with the man he admires, Jung has a different idea about how their field should be developed, so, as some of you know, they are bound to conflict with each other. Jung start to advocate the mythicism as the tool for exploring their undiscovered country, which Freud stubbornly rejects it as nonsense.

The situation gets more complicated when the intimate but inappropriate relationship between Spielrein and Jung(he’s a married man, by the way) gets overlapped with the strained academic relationship between Jung and Freud. Though this triangle is not as kinky as you might think, the director David Cronenberg’s cool, analytic approach to the story makes their interactions, which mostly consist of lots of conversations and discussions, fascinating to observe. I am just vaguely familiar with their metaphysical knowledge and theories, but I kept listening to what they say with the constant amount of fascination. The movie is based on Christopher Hampton’s play “The Talking Cure”, which is based on John Kerr’s nonfiction book “A Most Dangerous Method”, and Hampton, who adapted his play for the movie, provides the conversations compelling enough to hold our interest to his episodic plot. After all, the characters in the film are professionals; they know what they are talking about, and they really talk about something while using familiar terms like ‘libido’.

It is sort of strange to see that Cronenberg made such a mild conventional period drama like this, but, considering how he has evolved from the master of bloody body horror to the master of intense psychological drama, it’s not that surprising. In his early movies like “Videodrome”(1983) or “The Fly”(1986), the bodies of his characters are the anarchic stage for their inner conflicts, which would fascinate both Freud and Jung. In his recent films, Cronenberg moves from the body to the mind with the more subtle approach for the examination of human psyche, and this movie seems like a logical arriving point.

The three main performances are all commendable, and the most notable is Keira Knightley, who embodies the sheer intensity of the tumultuous state of an unstable mind. Looking at the early scenes where she struggles to speak while her body uncontrollably twitches, you will not be surprised even if she turns into something freakish like the characters of the early Cronenberg films. After dialing down her intensity later in the story, Knightley becomes more convincing as an intellectual and passionate woman who struggles to find her place as a scholar between two giant figures of her field with her eclectic theory.

Michael Fassbender, who gets lots of acclaims through his uncompromising performance in “Shame”(2011), is less showy in this film, but he is effective as a stern man struggling with his dark conflict. Though he recognizes the desire inside him, Jung also knows how professionally and privately dangerous his relationship with Spielrein is. How he eventually treats her is very cruel, but it also makes him miserable a lot.

While Vincent Cassel, who plays a libidinous rogue psychoanalyst Otto Gross, has his own fun moment as the impish devil whispering the temptations into Jung’s ears, and Viggo Mortensen gives a humorous performance as Dr. Freud, who always looks like he has all the answers – with a cigar in his hand(if his cigar were a little longer in the film, I could describe it as “phallic”). As much as Jung is afraid of advancing his relationship with Spielrein, Freud is protective of his precious field, and it is one of the main reasons behind his disagreement with Jung. The movie also makes an interesting point about the class difference between Freud and Jung as a Jewish and a protestant; when they board the ship to America, Jung goes to the first class cabin while Freud has go to the second class cabin.

When they are about to arrive in America, Freud asks Jung, “Do you think they know we are on our way, bringing them the plague?” Though most of their theories have been changed or revised during the last century, their ideas have certainly influenced our perception on the human mind a lot while infiltrating into our consciousness. I must say I do not know much about psychoanalysis, but, to be frank with you, I won’t deny that I have a small fun whenever I get the chance the use terms like “Freudian” or “Jungian” in my reviews.

This entry was posted in Movies and tagged Drama, Psychiatrist, Psychoanalysis, Triangle. Bookmark the permalink.