While watching “War Horse” on this Thursday evening, I recalled what one South Korean blogger wrote a few years ago. According to him, there are two kinds of manipulative drama films. Both of them try to tug our heartstrings, but one only makes us say “I can see through you” while we are feeling distant from it, and the other makes us absorbed and moved even when we are well aware of that it wants to squeeze our emotions from us.

“War Horse” surely can be criticized as a manipulative sentimental melodrama with its character thrown into the horrors of war, but it is an excellent film belonging to the second category mentioned above, and it is as good as it can be. As a sort of cross between “Black Beauty”(1994) and “Au Hasard Balthazar”(1966) wrapped in war film, the movie has the beautiful scenes reminiscent of those classic films made a long time ago by the great directors like John Ford. When I saw the country village, the wide green field where horses can gallop freely, and the big blue sky above it, all of which rendered gorgeously on the screen during the first half of the film, I nodded with appreciation and delight. When the story moves to the battlefields of World War I, there are equally harrowing moments filled with the horrors of war, and that familiar lesson about war is effectively delivered to us while we are horrified and saddened by what its central character and others go through.

Its central character does not talk, because it is a horse, after all. We see the moment of its birth, and then its happy time with its mother on the green field. When it grows up, it is sent to the auction in the village, and that is how he is owned by Ned Narracot(Peter Mullan), a farmer with drinking problem. Although the horse is a thoroughbred not ideal for his farm work, Narracot is determined to buy it just because he wants to spite his landowner(David Thewlis) who also wants to buy that horse. Narracot wins, but he spends all of the money in his pocket, much to the dismay of his wife Rose(Emily Watson), who must have been tolerating a lot from her husband with understanding and love(“I might hate you more, but I’ll never love you less.”) 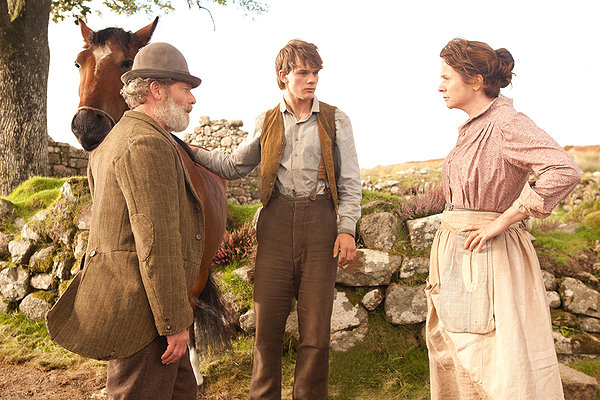 Anyway, their son Albert(Jeremy Irvine) is excited to see the horse; he was there when it was born and he has always wanted to have it. While their story is unfolded with the imminent financial problem they have to deal with, the film, shot in Devon and other locations in England, shows the beautiful landscape surrounding them, and the Narracots’ residence adds additional beauty in the middle of this background, with a funny goose whose brash ferocity reminds me of those fearsome avian hoods in my university campus.

Albert and his horse, named Joey by him, become closer to each other while going through their hard time, but they are soon separated. World War I breaks out, and, because they run out of money, Albert’s father sells to one chivalry officer(Tom Hiddlestone). Of course, there is a moment of tearful goodbye, but the movie does not overplay it. We never get a clear idea about what Joey thinks about its situation in the film(in Michael Morpurgo’s novel, the horse tells us its story like “Black Beauty”, by the way), but the drama in the film works because the director Steven Spielberg indirectly suggests its feelings to us through its eyes and behaviors – that is better than a talking(or narrating) horse.

The second half of the film is about the bleak journey Joey goes through during the war. In the war where the modern weapons like machine gun, tank, and mustard gas were used, using horses in battle are wasteful and pointless, and that point is chillingly presented in one sequence when the British cavalry attempts a sneak attack on their enemy. The sequence is mostly restrained except when the cinematographer Janusz Kaminsky’s camera captures soldiers and horses charging into the field in long shots with the sense of an epic film, but its tragic horror outside the screen is papable even though we only see the German soldiers shooting their machine guns and the horses without riders running past them. There is also a grueling moment when Joey and other horses are forced to drag the big cannon up to the steep hill; I was relieved to see that no animal was harmed during the production, but it looked realistic enough to me. 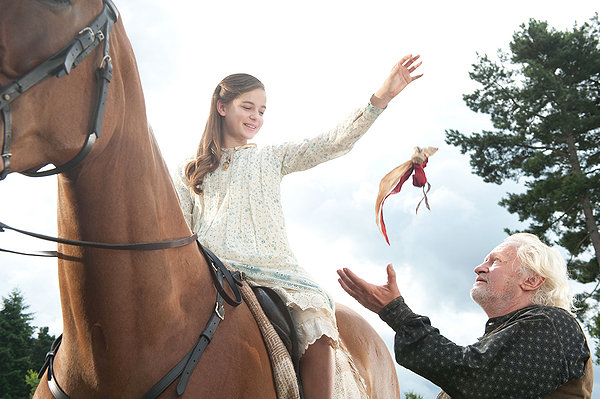 While managing to survive, Joey is moved around several people it comes across. Whether they are German or British or French, most of them are kind and generous to Joey and they give it some help. Each of them is no more than the place Joey drops by(the actors are good; Niels Arestrup is notable as an old French farmer with his sick but plucky granddaughter), but there are touching moments here and there, such as when the British soldiers and the German soldiers help together the horse entangled in barb wires. Though they are all scared and tired in the trenches, they still have enough human compassion to help a poor creature unintentionally stuck in no man’s land, and they forget for a moment that they are enemies.

While Joey is going through this ordeal, Albert worries about his horse, and he later enlists in the army with his friend when he becomes old enough. I guess I do not spoil any of your entertainment if I say that they finally meet each other in the end. We can see its ending coming from the beginning, but the movie presents it more effective and emotional than we expected. The scene looks achingly gorgeous with the sunset, and John Williams’ Oscar-nominated score dramatically swells, and we are very happy for the ending Joey deserves after so much horror it went through.

“War Horse”, which is nominated for the Academy awards in 6 categories including Best Picture at present, is a movie with respectful classic styles which is quite honest about what it intends to do. We can see instantly that it tries to manipulate your emotion, but Spielberg handles us with deftness as he did in many of his successful works, and the film is a moving story with the good scenes to be remembered and one horse we care about. You can call it a sappy melodrama, but how can possibly we feel nothing when the animal is scared by the danger it cannot fully understand?

Sidenote: Morpurgo’s novel was also adapted into the acclaimed play with the same name, and, from what I saw in those wonderful YouTube clips, it might be more interesting and powerful than this film. I’d love to see the play at theater. 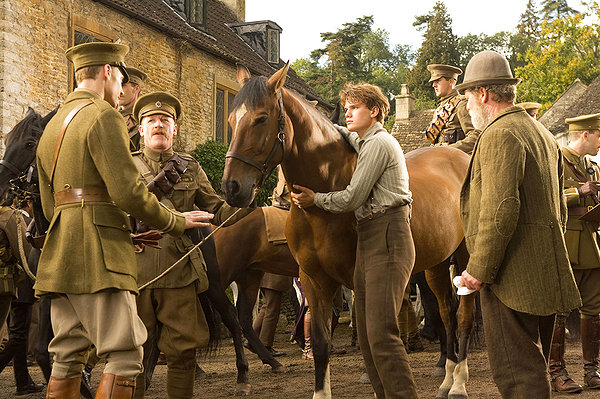 This entry was posted in Movies and tagged Drama, Horse, War, World War I. Bookmark the permalink.