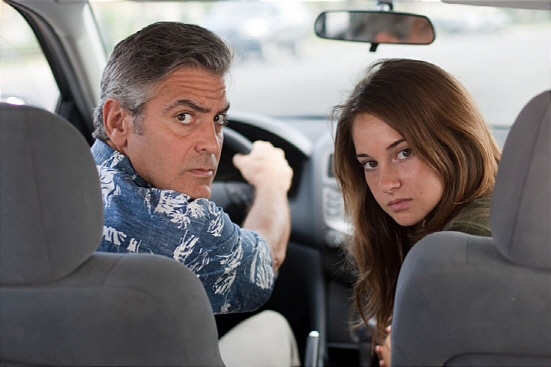 “The Descendants” is about a man who suddenly finds himself at the crucial moment. He has been leading a comfortable life for him and his family without much thought, but, whether he likes it or not, now he has to deal with his imminent family matters. They seem to be separate problems at first, but the things turn out to be not as simple as we thought. The movie is the perfect mix of sadness, pain, and humor, and what we get at the end of the story is the emotional growth of the hero who has forgotten his role and responsibility in his family.

One family matter for Matt King(George Clooney), a lawyer living in Hawaii, is selling the last chunk of the family land for 0.5 billion dollars. He is one of the descendants of the Caucasian family who have become a part of the local society since they acquired the substantial part of the Kaua’i Island thanks to the marriage between one of their ancestors and a Hawaiian princess in the middle of the 19th century. The family assets have been decreasing over the years to support and finance the family members, and now they only have that land, which many of them want to sell to the buyer who will build another vacation facility for the tourists. Matt’s job is simple; as the sole trustee of the land, all he has to do is signing the papers as the final approval after the vote at the upcoming family meeting. 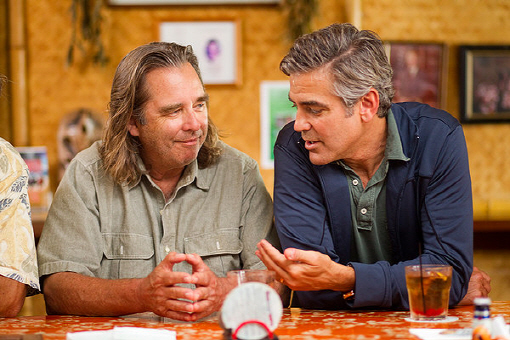 But he also has the other matter which is more difficult to handle. His wife, Elizabeth(Patricia Hastie), has been in coma after the boat accident, and he is not yet accustomed to his new role, “a backup parent” to his two daughters who had mostly been taken care of by his wife. Now the doctors say that there is no chance of recovery so, as she wished before, they will let her go, and he has to notify others of this news for giving them the chance of saying goodbye to her.

This is certainly not an easy job, but it turns out there is more difficulty for Matt. He happens to learn that his wife has been cheating on him. Though he and she have been distant from each other for a long time, they are still a husband and a wife, so the news naturally comes to him like a sudden jolt. Confused and disoriented in this personal upheaval, he decides to find and meet the guy she had an affair with, so he moves around Hawaii with his two daughters Alex and Scottie(Shailene Woodley and Amara Miller) and Alex’s goofy boyfriend Sid(Nick Krauses).

The movie follows them in its languid pace with the acute sense of the area the characters inhabit in. Hawaii in this film is not a postcard image we usually think of; it is their hometown they have been living for years. While there is a melancholic undertone generated from their loss and pain, there is also relaxed warmth and intimacy in the landscapes and the places the characters go around. The people are interesting to observe, too; Matt’s family members may look like a bunch of bums or stunt men wearing sandals and short pants, but, like Matt, they are in fact influential figures in their island. One of the amusing things in the film to me is that Matt and his family move between the islands by planes rather than boats. Sometimes we forget how much the Hawaiian islands are apart from each other.

The director Alexander Payne, who adapted Kaui Hart Hemmings’ novel with Jim Rash and Nat Faxon, looks at his characters with that dry but humorous attitude we have witnessed in his previous works. While several sincere moments of pain and sadness organically comes out of the circumstances his characters are dealing with, the movie also finds humor from here and there in its story. The humor does not just lighten the mood; sometimes, observing how funny it is can be led to understanding how painful it is to them. Matt lets out his feeling of being betrayed to his wife at one moment, but, as we and he know well, it is of no use to be angry in front of the woman who cannot even hear what he says, let alone respond to.

Payne does a subtle job of rolling the plot in a seemingly predictable direction. We think we know where it is directed toward, but it surprises us by revealing the unexpected complexity of the characters and their situations. For example, when Matt finally confronts the man he wants to see, he sees that he should be more tactful than he initially thought even though he has no intention of revenge. As the guy in question, Matthew Lillard excels in his scene with Clooney, and Judy Greer is also good as his wife. The interactions between them and how their matter is connected with Matt’s other matter crucially affect the choice he has to make later in the story.

As the man at the fork of his life path, Geroge Clooney gives one of the best performances of 2011(He deservedly won the Golden Globe award for Best Actor in last week, and he is also nominated for Best Actor Oscar in this week). I heard from somewhere that Payne rejected the idea of casting Clooney as one of the main characters in his previous film “Sideways”(2004) because it was impossible to imagine him as a washed-out actor. It may be also impossible to imagine Clooney as a plain ordinary family guy, but, as he found an unexpected side in Jack Nicholson in “About Schmidt”(2002), Payne correctly finds the right stuff in Clooney to play his hero in this film. Shedding his usual easy-going charm and smooth star actor persona, Clooney is believable as a man who slowly learns what he has ignored and lost in his life while strolling through his difficult emotional journey. Clooney is mostly quiet and reserved on the screen, but we always know what is going on his head full of surging emotions.

Payne also fills his story with the vivid, colorful supporting characters more complex and human than we expected, and they are played by the wonderful cast Payne assembles for supporting Clooney. While Shailene Woodley has been praised as the daughter with some issues who gets close to her dad more than before through their journey(it’s a shame that she did not get nominated for Best supporting actress Oscar, by the way), it should be mentioned Amara Miller is also memorable as her younger sister. Miller has one emotional scene around the finale, and it is one of the saddest moments in the film.

Robert Forster previously disappointed me a lot with his unfortunate appearance in that dreadful trash called “D-War”(2007), so I am very glad to see Forster as Matt’s gruff father-in-law who keeps reminding his son-in-law that her daughter deserved better. It looks like a typical role, but, through his face aged with experiences, Forster makes us understand his character has a good reason for that as the father who cared about his daughter; he conveys a lot of feelings behind that in one small scene when his character is briefly glimpsed by other characters.

In his brief appearance, Beau Bridges is amiable as Hugh, one of Matt’s cousins. His character could have been easily depicted as the villain, but the movie does not allow such a cheap way like that. It is only the matter of difference of opinions between him and Matt, so, with no bad feelings, he kindly warns Matt about ensuing troubles to come caused by himself and others. Nick Krauses is the major comic relief in the story as Alex’s boyfriend Sid, but he has his own moments when his character is shown to be far more than a clown; to our surprise, Sid reveals considerable intelligence and thoughtfulness along with the truths he sees from others.

Alexander Payne has kept making good films since his debut with “Citizen Ruth”(1996), and, again, he gives us another intelligent drama which is both sad and funny with the keen insights on the human feelings and behaviors. It also has the interesting comments on the relationship between the land and the people accompanied with history and morality, and that makes the movie more interesting. Although there still remain the matters to deal with at the end of the story, it is emotionally fulfilling to watch the last scene which has been compared with the last scene of “Michael Clayton”(2007). They say little, and their future is uncertain to some degrees, but we know their life become a little better than before. As in many good family dramas, that’s quite a progress for them.

This entry was posted in Movies and tagged Drama, Family, Hawaii, Land. Bookmark the permalink.