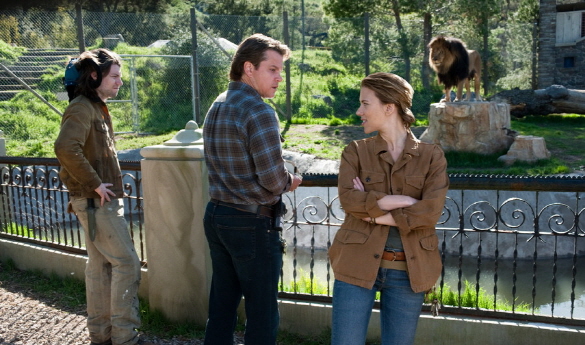 In Cameron Crowe’s new film “We bought a Zoo”, the hero says at one point that sometimes all you need is twenty seconds of insane courage. I guess that is what he has when he makes an important decision for the life of his family around the beginning of the story, but he eventually needs far more than that for his decision. As the title literally says, he buys a zoo, and he tries to manage it even though he has very little experience with animals except the family dog.

It sounds like a story only possible in movies, but a British guy named Benjamin Mee, a former DIY columnist for The Guardian, actually made such a bold decision in real life. In 2006, he and his family bought Dartmoor Zoological Park in Devon, England, and they renovated the zoo which was nearly shut down at that time. They re-opened it to the public in the next year, and Mee later wrote the book about his experience at the zoo.

Though the movie is based on his book, you will see that lots of things are changed by Crowe and his co-writer Aline Brosh McKenna if you check Wikipedia. Above all, the background is changed from England to US, so Dartmoor Zoological Park is changed into Rosemoor Wildlife Park located in (mostly) sunny place in South California, US. Under the bright sun, though some of them have some depression problem, the animals in the film certainly look less depressing than the animals which I saw at Lincoln Park Zoo in Chicago, Illinois during one cold early morning of April in 2010.

With Mee’s approval, his counterpart in the film becomes a typical widower dad we have seen in Hollywood family movies. Played by earnest Matt Damon, Benjamin Mee is a journalist who still struggles to move on after he lost his wife to cancer. He has managed to be a good dad to his two children, but it has been becoming more difficult. Although his cute little girl Rosie(lively Maggie Elizabeth Jones) is little affected by her mom’s death because she is young, his son Dylan(Colin Ford) is a moody teenager who keeps making troubles because, well, he lost his mom. He is recently expelled from his school with three suspensions, and he does not talk often with his concerning dad.

After finally quitting his job, Ben decides to change the environment, so he searches for the house ideal for him and his children, and, what do you know, he finally finds the dream house he searches for after passing so many nice candidates. However, there is one flaw in this house – there is a zoo right next to the house, and he has to manage the zoo if he buys the house. As a matter of fact, the house is so close to the zoo that they can hear the lion roar. I know the animals in the zoo are safely confined in their places, but I will not be able to sleep well in that house if only the wire fence prevents the lion from attacking me.

Anyone must have some second thoughts, but Ben decides to purchase the house along with the zoo, because 1) his daughter is happy with peacocks and 2) he feels that this is the place for the family. Dylan naturally does not like his dad’s decision because they are now living outside the city, but we all know that 1) he will like the zoo in the end and 2) he will also realize that Lily(Elle Fanning), a younger sister of the lead zookeeper Kelly(Scarlett Johansson), has some feeling toward him.

With slow, easy-going mood, the movie leisurely strolls inside its genre formula we are familiar with. Sometimes its quite predictable story is pushed by common plot devices which always do work, but the movie is comfortable and pleasant as a whole, and there are funny moments I enjoyed(Okay, the snake scene is a little too contrived, but it is funny to see those snakes slithering in front of the house) and warm moments I appreciated. As we expected, Ben and Kelly are getting closer as the time goes by, and Damon and Johansson are nice to look at in their tender scenes, though their mutual major concern is whether they should euthanize that poor aging tiger or not.

Crowe is a good director/writer who can jump beyond clichés and stock characters as shown in his best works such as “Almost Famous”(2000), but, as in his previous work “Elizabethtown”(2005), he does not do much in this time. That does not mean that he lost his talent; the dialogues are still good and are delivered precisely, and the pace of the story is appropriate though it lags sometimes. Though I could see that Crowe shifted the gears behind the story, but I could also see the real feelings inside the characters, and Crowe does not wisely overplay them. The soundtrack consisting of the score by Jónsi and several pop songs proves again that Crowe is certainly not a director who uses the songs like wallpapers for his movie.

But I think the story is too predictable and generic to recommend this film despite several things I like. I could see where it was going to even when it throws several moments of so-called crisis for injecting some tension to the drama. One of them is represented by a zoo inspector played by John Michael Higgins. He is an obnoxiously fastidious guy who checks every details for judging whether the zoo can be re-open to the public or not, and Higgins has small funny moments before his character inevitably follows the path pre-determined by the plot.

The other supporting performers playing the staff members are more or less than the colorful caricatures filling the background just like the animals they take care of, and most of them, except Johansson and Fanning, do not have many things to do. The animals in the zoo look good and natural thanks to the cinematographer Rodrigo Prieto, but they do not leave lots of impression. However, I must say that I was constantly disturbed by the tigers after hearing from Johansson’s character about how tigers kill their prey with their teeth.

Anyway, I do not want to be sarcastic, so I confirm to you that this is a mild, harmless, and pleasant family film which does most of what it intends to do, and the family audiences will like it more than me. None the less, considering the talents gathered for this movie, I know too well that it could have been far better than that.