“The Help” reminds me of the term I frequently use for description when I write movie reviews in Korean: “Giseongpoom”, which means “ready-made product” in English. I and other South Korean critics use that word if the movie we talk about is safe, non-provocative, and, above all, crowd-pleasing, made with competent direction. Movies of this kind are usually nothing new or groundbreaking, but we do not deny the fact that it is a nice movie to be appreciated by both the audiences and us.

The story of “The Help” is about the friendships between four women in Jackson, Mississippi in 1963. Aibileen Clark(Viola Davis) and Minnie Jackson(Octavia Spencer) are colored maids who have been silent about what they have seen or heard from their insensitive white employers. They do talk about that, but it is only when they are with other colored maids in their neighborhood, not with the outsider like Eugenia ‘Skitter’ Phelan(charming Emma Stone).

Skitter is a white girl who recently returns to her affluent home after her college graduation. Her mother(Allison Janney) wants her to get married as soon as possible, but she is determined to be a writer, so she goes to the local newspaper. She gets a job, but she does not know well about how to advise the female readers on the domestic matters in kitchen, so she approaches to Aibileen for help when she is invited to the social meeting held by Aibileen’s employer. 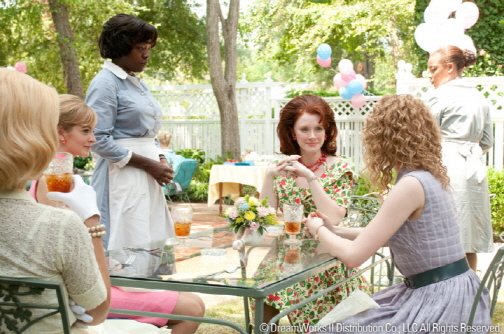 And then, Skitter gets an idea about the book to be published. She suggests to Aibileen to talk about her life story with her employers; and she also wants the stories from the other maids. Aibileen has the reservation about it, which is not so surprising, considering that the 1960s was the most turbulent time in the American modern history. The Civil Rights Movement has just started, and its violent clash with the racism in the South is briefly glimpsed in the movie(Medgar Evers, a real-life civil rights activist, is shot by a KKK member in their neighborhood). Talking openly with the white people like Skitter is a taboo in Aibileen and Minnie’s world; that can mean lots of danger to them.

But Aibileen has the painful story to tell, and she decides it is time to open her mouth. She raised 17 white baby girls with lots of care and love in her life as a maid/nanny while her employers were absent, but she never had enough time to take care of her son. Her white baby girls were eventually grown up to be just like her racist employers – and her recent employer’s daughter will probably follow that progress, no matter how much both adore each other. Her son was fortunately grown up well with the education she never had, but he died in another unjust case of racism. Viola Davis has always been impressive even when she made a short appearance, and now she takes the center of the story with quiet resilience revealed minute by minute.

Her close friend Minnie also has her own story to tell. Her boss, Hilli Holbrook, is a mean, heartless woman effectively played by Bryce Dallas Howard. Minnie is fired just because she used the bathroom in Hilli’s house, not the one outside the house. As a matter of fact, Hilli is so racist that she even proposed the bill for a separate toilet for the colored maids at white employers’ houses. That may sound outrageous to you, but it was the time when racial segregation was accepted everywhere in the place like Jackson. Octavia Spencer, who has been relatively unknown before this movie, has a breakthrough in her career as the lively maid who cannot suppress her feelings often in her transparent face. Minnie gets her revenge she reveals later, and it is one of the hilarious scenes in the movie, well delivered with a good timing by Spencer, Howard, and Sissy Spacek, who has a small fun as Hilli’s mother on the verge of senility.

After fired by Hilli, Minnie has virtually no employer to hire her because of the lie spread by Hilli, but she is fortunately hired by Celia Foote(Jessica Chastain). Celia has been ostracized by Hilli and other women in the town just because she looks common in their eyes and, most of all, she marries Hilli’s former boyfriend. With her wonderful performance, Chastain brings humanity to her seemingly superficial character. It shows from her first appearance that she is not well adjusted to her new world while nervously trying hard to fit into it. Her unwise decision, along with several coincidences and misunderstandings, causes a disaster at the charity party(for starving African children, by the way), but, after having learned that she is different from other employers, Minnie stands by her as a friend and both touchingly confirms to each other that they are good friends. 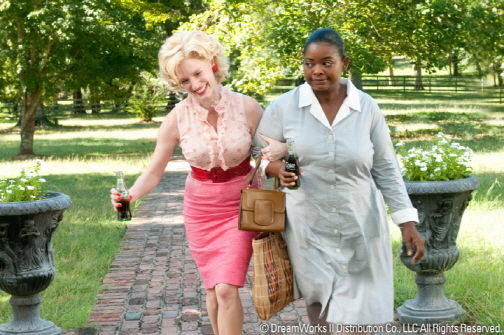 Skitter’s story is less interesting material compared to others’ because it is a familiar one we have seen many times from the movies about racism with white heroes/heroines. She is one of those good white characters who realize there is injustice caused by racism and are determined to do something about that. Right after coming back to her home, she is upset to know that the maid she had been close to was fired by her mother. Of course, she comes to know the reason behind that from her mother, who naturally realizes later that she did a wrong thing to her dear maid through the book written by her daughter and the colored maids, and then gets over her racism with a predictable feel-good moment for the audiences.

There have been articles about how “The Help” sanitizes that turbulent era, and I agree to them to some degrees. Though the movie rightfully reminds us that it was hard time for the colored people and lots of injustices were done to them, the turbulence during the Civil Right Movement is always at the margin like the news from outside the town. In history, lots of people took risks far bigger than the one taken by the characters in the movie, and some of them lost their lives like Medgar Evers or three activists in Mississippi Burning incident. Alan Parker’s “Mississippi Burning”(1988) is a biased, manipulative film, but I admire how it vividly shows us how violent that time was in Mississippi; I think it is more honest about the volatile atmosphere of that time than “The Help”.

But maybe I expect too much from the movie, which is based on Kathryn Stockett’s bestseller with the same name and never intends to step out of it. I am reading it now out of curiosity, and it is one of those nice, mildly pleasant books you can read without worry. Considering how much these wonderful actresses, who deserve to be nominated for the ensemble awards, bring to their roles, the movie could have been better and more moving, but I think I can accept it as “a good Giseongpoom”. The performances compensates for its many flaws and they are good enough to hold my attention for more than 2 hours.

This entry was posted in Movies and tagged Drama, Maid, Racism, Segregation, The South, Writer. Bookmark the permalink.