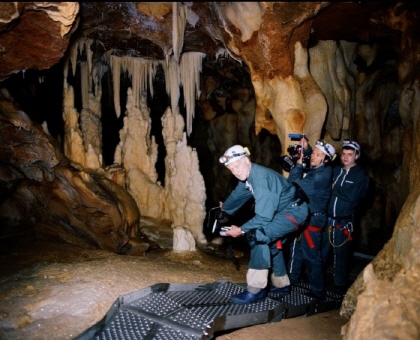 There are several reasons why Werner Herzog’s documentaries are usually interesting. One of the reasons is that, while being one of the most entertaining directors in the world, he is also one of the most amusing documentary narrators. He is dead serious while deeply musing on his subjects. His narration sometimes swerves into unexpected directions, and we get some deadpan moments to savor later. In “The Encounter at the End of the World”(2008), one of the most memorable moments is when he asks an expert about “gay penguin”.

Also, he gives us wonderful moments to remember in his works, and he did it again with his latest documentary “Cave of Forgotten Dreams”. From the famous cave that has been nearly inaccessible because of preservation, he vividly captured the uncanny atmosphere of its interior along with the beautiful artworks created by the nature and men. The movie immerses us into this amazing world, and I think the movie is worth my 1-hr bus ride to Jeonju International Film Festival in this weekend.

In 1994, a cave was discovered on the limestone cliff by three speleologists in southern France. It turned out that Chauvet Cave, named after one of the speleologists, Jean-Marie Chauvet, was like a big time capsule from the Paleolithic age. Although many caves were found and known for their archaeological value around that area, Chauvet Cave surpasses them all in many aspects. Besides lots of cave paintings drawn on its walls long time ago, there are many other valuable traces from the Paleolithic era including fossilized animal bones. Furthermore, because the entrance of the cave had been blocked by a rock for more than 20,000 years, they had been preserved in a nearly perfect condition for quite a long time. Based on the radiocarbon dating, it is accepted by most scientists that the cave has the oldest cave painting. It also has the oldest human footprint from around 25000 years ago, which belongs to some child. 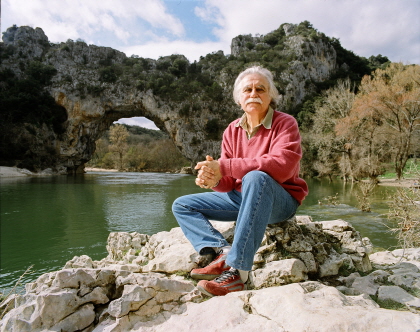 Since its discovery, the general public has been not allowed to enter, and few people got the access to the cave for academic reasons. In case of Herzog, he got the special endorsement from the French minister of Culture, but the rules were strict. The shooting time per one day was limited to only several hours. The crews only consisted of Herzog and three peoples including the cinematographer Peter Zeitlinger. They had to wear special shoes and clothes for not damaging the preserved environment inside. They always remained in the established path while shooting, and there were some areas they were not allowed to enter due to the high concentration of carbon dioxide in the air, which is very toxic to human body.

In spite of these limits, the sights captured on the camera are awe-inspiring. There are various kinds of animals from the ancient times depicted on the walls, including horses, rhinoceros, bears, and mammoths. Some of the paintings provide very helpful information to paleontologists. For example, they were not so sure about whether male cave lions, one of the extinct species, had mane, but, thanks to one of the paintings in Chauvet Cave, now they know the answer.

The cave paintings are not just valuable as artifacts; they are also valuable as artworks. The paintings shown in the film are the good evidences that our species found the creative way to communicate visually with others during the early chapter of human history. Not only they have information, but also they have styles and feelings and characters. The depictions of moving animals in the paintings are remarkable; some of them might be the first early step of the path leading to the moving pictures – or movies. There are red hand prints on the cave surface. You can see that they all belong to the same man because of the distinct feature of his little finger. In addition, the nature has silently decorated the cave with plenty of calcites, stalactites, stalagmites, and other exquisite mineral structures. Along with the remains suggesting some religious rituals, they create the elusively mythical mood in the cave. 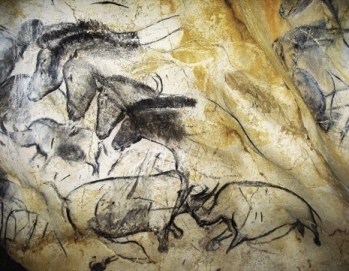 Compared to that dreadful 3D cave adventure movie “Sanctum”, the film gives a much better 3D experience inside cave. Although he does not like 3D much, Herzog decided to use 3D technique for he thought it was effective way of capturing how the painters used the bulges and contours of the walls in their works. 3D effect still has its own distracting aspects in his film, especially in the scenes outside the cave, but it works successfully in the cave as much as he intended. Through 3D effect, we can fully appreciate the surfaces in the cave as well as the 3D map of Chauvet cave made by the computer. The light sources were limited due to regulation, but Herzog creatively used that limitation to convey us how the paintings looked to the ancient painters who only had torches at their time.

There are some funny moments in the film, and, while I watched the movie in the screening room full of audiences, and they frequently laughed because of his offbeat questions and remarks. The first laugh came from the former occupation of one of scientists interviewed in the film. We were tickled by Herzog’s droll comment when one expert clumsily tried to reproduce the primitive hunting method. By the way, I have never thought “Baywatch” can be used for the comparison with the ancient artworks, but, come to think of it, we have always been motivated by sexuality from the beginning, haven’t we?

And then there is an interesting closing chapter waiting for us at the end of this engaging experience. It seems redundant(it is titled “postscript”) but I have to say it is as quirky as those iguanas in his previous movie “The Bad Lieutenant: Port of Call – New Orleans”(2009). I don’t know why Herzog added it to the movie, but I can say it is a nice footnote to the marvelous images from the special cave rarely shown to us. 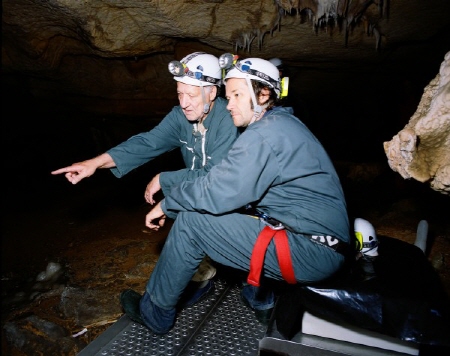 This entry was posted in Movies and tagged 3D, Cave, Cave Paintings, Documentary. Bookmark the permalink.